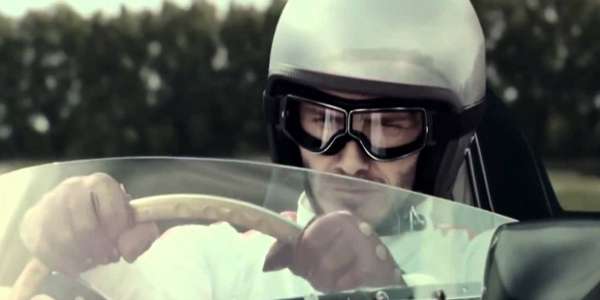 Why David Beckham’s Jaguar TV commercial is the best yet

TV ads are some of the most anticipated part of the Super Bowl because everybody wants to see the best ones, but I’m here to say that my new favorite TV ad is from China and features a Jaguar.
Advertisement

Jaguar announced last year that David Beckham (British Soccer Icon) would be a Brand Ambassador for China. The long term partnership will use Beckham as the star in many print ads and TV commercials exclusively in China, but thanks to YouTube we don’t have to miss out.

Jaguar says “David’s role will initially see him featured alongside the new Jaguar F-Type Coupe – His role will develop and will see him feature in many Jaguar brand and production communication campaigns in the coming years, including those for the Jaguar XJ, the company’s award winning large luxury sedan.”

The Jaguar TV ad from China begins with David staring down his vintage Jaguar race car as he waits for the flagman to signal the start. As they did back in the day, drivers would sprint to jump in the cars and speed away as they strapped their goggles on. While the race progresses, Beckham is seen in various iconic Jaguar race cars as he leads the pack of hungry competitors. Each time the cameras pan away from him in the cockpit, he’s driving a little newer vintage Jaguar racer, and then as he slams the shifter into gear, he is suddenly transported onto the twisty roads of a scenic coastline. Now he is in the driver’s seat of the iconic E-Type (XKE) and the V12 cat roars, but as the music builds and the climactic scene approaches he’s now at the helm of the sexy new manual shift Jaguar F-Type. The sleek red roadster carves each corner and the roar of the 550 horsepower supercharged V8 engine echoes through the mountains and down the bluff.

As he powers out of a tunnel the red roadster has transformed into a white F-Type R Coupe racing through the London streets, and he hits the paddle shift to lead the way again being flanked by the entire Jaguar lineup in formation. The slight grin on his face says it all as you can imagine yourself behind the wheel. The announcer boldly says “Never stop achieving” and that is exactly what Jaguar intends to do.

David commented “I’ve always been an admirer of Jaguar – from the styling and design to the feel and roar of the engine, every element feels uniquely British. I love the classic E-Type of the 60’s and today this legacy is alive in the phenomenal F-Type Coupe, a car that epitomizes British craftsmanship. It’s an honor to support a brand with such an amazing heritage and I look forward to being part of Jaguar’s exciting future in China”.