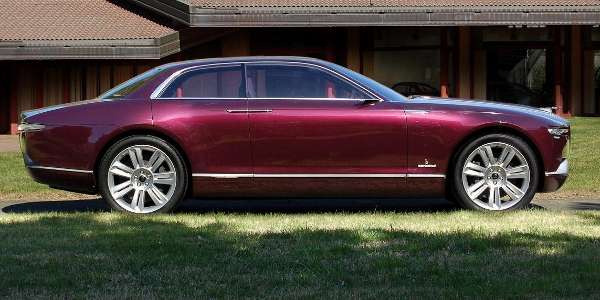 The Jaguar B99 Concept by Bertone was radical

The Geneva 2011 Car Show was the birthplace of a radical concept car from two icons, Jaguar and Bertone and it celebrated the 99th Anniversary of Bertone. Was the sexy look of this car too much?
Advertisement

Concept cars are the perfect way to showcase new design ideas or do something that’s never been done before. Automakers basically have a blank canvas to paint their next masterpiece. So, when I ran across the photos of the Jaguar B99 Concept car show back in 2011, I had to wonder……why not? I mean this car had some killer looks, distinctive design cues, and even a hybrid drivetrain. The car was designed by Bertone’s Michael Robinson and Adrian Griffiths and we can learn a lot from this fantastic looking concept. At the time Jaguar was flattered by the vehicle but politely said no thanks to building the Italian design this time around.

Jaguar was still looking to overcome the pitfalls of the X-Type that had become a styling thorn in the side. They were also trying to be proactive and bring a new car to go head-to-head with the BMW 3-Series that had a seemingly monopoly on the competition. Bertone called the B99 a “dynamic imbalance between parallel lines and leaping forms”. The car was pointing to the direction that Jaguar would take with an all-new high mileage hybrid drivetrain designed by Bertone. Two electric motors were powered by batteries that draw a charge from a small onboard engine.

The car was a perfect blend of classic Jaguar styling with a dash of elegance from Bertone in a compact sedan also using an all-aluminum body (does this sound like the all-new 2016 XE?). The B99 name was inspired by the B in Bertone and to pay homage to the 99th Anniversary and it also marked another special significant accomplishment. With this vehicle, the Italian designer became the first and only Italian designer to have created five different Jaguars. They had already worked on the 1957 XK150, the 1966 Jaguar FT concept car, the 1967 Jaguar Pirana, and the 1977 Jaguar Ascot.

The first thing that grabs you about this concept car is its muscular look, the smooth but sleek lines seem to be leaping forward like the “Leaper” used on the hood. The leaping Jaguar is an iconic symbol of the brand that has been used for years and was the perfect way to show this car could gaze into the future and still carry on the infamous heritage of Jaguar. The wide rear with bulging hips and sleek sexy taillights should have given consumers a hint of the F-Type Roadster that would come in like a bolt of lightning in just a couple of years.

I hope that design teams and collaboration like this will always push the limits of the modern cars so that it will keep automakers on their toes. Some of the best designs come from radical ideas when we think out of the box, so never stop dreaming. As I have reported, Jaguar is about to release some of the most exciting and distinctive vehicle they have ever produced, but in today’s fast paced world they have to keep moving forward.

The famous car builder Carrol Shelby when asked what his favorite car he ever worked on was said “The next one”. Meaning he loved each vehicle he birthed, but his desire was to never be satisfied with the iconic cars he competed, but to always be ready to start something new and fresh!