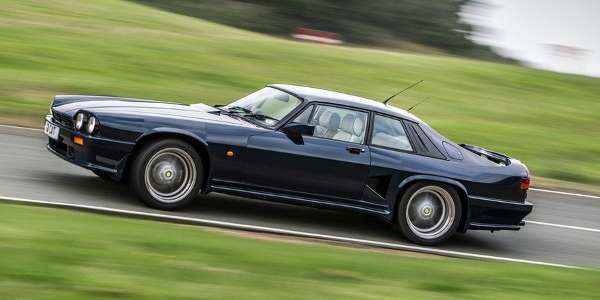 Most Jaguars are kept stock, but a wicked looking Lister Jaguar XJS 7.0 liter Le Mans Coupe will roll across the auction block at Stoneleigh Park near Coventry.
Advertisement

The Jaguar XJS was sold between 1975 and 1996 and the buyer purchased a little over 115,000 of the XKE’s replacement. It came in six-cylinder or the 5.3 liter V12, and was quick for the day. If the standard XJS V12 was not your cup of tea or you liked the looks but needed a little more growl from your sport cat, the Lister Jaguar XJS 7.0 Le Mans Coupe was sure to light your fire! Lister only made 25 of these fire breathing Jaguars and they were an instant hit on the streets due to their killer looks and ground pounding performance. The standard V12 was bored out to a 7.0 liter displacement and packed a heavy punch with its reported 604 horsepower. The car when originally sold in 1991 cost just over $115,000 which was a mighty high price tag back then.

On February 21st, 2015 this car will cross the auction block at the Silverstone Auctions’ Race Retro Classic Car Sale and will be sure to fetch a good bit of money considering its condition and rarity. The car only has 43,850 original miles on it and sports twin superchargers and a Getrag six-speed transmission.

One of the attractions of this car back in the 90’s besides the awesome performance was the electronic overhauling that Lister (a UK based company) performed on these cars. It’s no secret that the Jaguar XJS cars were plagued with electronic gremlins and Lister for an additional $35,000 would replace and upgrade all the electronics in the car and also do a slight resto mod. Some of the appearance package included larger alloy wheels, restyled rear, lower ground effects, spoilers, and Lister-styled Recaro leather seats.

Let’s face it - when it came to modifying Jaguar, Lister was a sports car racing legend, but in the late 80’s and early 90’s they became famous for building the Le Mans series XJ-S’s. With the low production numbers, race-inspired styling, jaw-dropping performance upgrades, and upgraded suspension/brake package, these cars are now highly sought after. Honestly, it’s amazing that this car still looks good today next to the modern Jags, but that should tell us something about the Lister and Jaguar combination.

Some say the earth shattering sound these cars produce is reason enough to buy one, but no matter the reason, these Le Mans XJS’s are part of Jaguar’s legendary history. Maybe I will register to bid and do my best to purchase this car; after all it will most likely sell for less than a used F-Type and be filled with just as much fun!