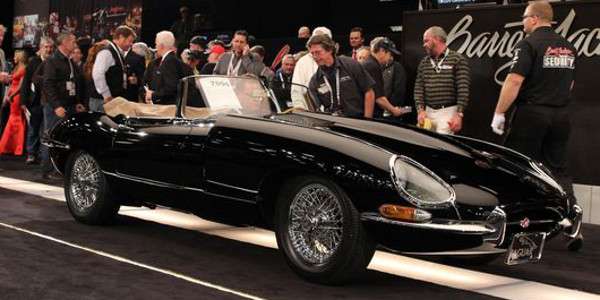 Wednesday at the 2015 Barrett Jackson in Scottsdale, AZ a 1964 Jaguar XKE (E-Type) Series 1 Roadster sold and wait till you hear what Craig Jackson had to say about it.
Advertisement

It’s that time of year when automobile auctions are heating up the air waves. If you are very lucky you might be fortunate enough to attend one in person and catch the fever. Scottsdale, AZ is the place to be in January if you are an automobile enthusiast and this year promises to be bigger and better than ever.

Most of the time the Barrett Jackson auction is filled with American muscle cars from the 60’s and 70’s, but occasionally you will see a few European sports cars cross the block, but not like it was a short time ago. Iconic hot-rods and classic customs have sort of taken over as the cars to build and the cars that bring the top dollar today. However, a special British Roadster sold on January 14th and it even had Craig Jackson (Chairman/Chief Executive Officer of Barrett Jackson Auction Company) talking about it.

The 1964 Jaguar XKE (E-Type) Series 1 Roadster (Lot # 7000) was in pristine condition and the Onyx Black paint glistened like wet nail polish. The tan top and interior was the perfect contrast of this vintage open top roadster. The California car was complete with full documentation of the restoration performed and also proof of zero rust and accident free. It was equipped with a 3.8 liter dual overhead cam engine with three carbs. The 4-speed manual transmission, independent front and rear suspension, 4-wheel disc brakes, and chrome spoke wheels set the car apart in a muscle heavy crowd. The car sold for $181,500.00 and was a fine example of how well the British sports cars are doing at auction these days.

Hagerty shows an upward trend in the price of these spectacular looking cars, however, they have an average price on the convertible of $110,910 listed on their website. I’m sure the temptation at an auction to continue bidding is very hard to resist. For a pristine example like the one sold Wednesday night, it’s not surprising it sold for such a premium. After all, American muscle cars are flashy, loud, and downright in your face, but a classic roadster like this series 1 E-Type has a certain kind of swagger to it.

Very interesting to me was hearing the comments about the Jaguar E-Type from Craig Jackson, he said “These are great cars with iconic lines, the new F-Type gets a lot of its styling cues from the E-Type – these cars are one of the most beautiful, I mean, I not a huge English car fan, but these are one of the cars I really like. European sports car are one of hottest on the market today.” Showing his knowledge of classics, Craig knew what he was talking about when he said he thought this car would do well across the block, the Jaguar was one of the top sellers on Wednesday at the Scottsdale Auction.

Benjamin Balaban wrote on January 18, 2015 - 9:02am Permalink
I am an owner of an award winning 1990 Vanden Plas Majestic and recently new owner of a 1996 XJS DHC being mechanically restored. As an avid fan of car auctions, I saw the 1964 E-type being sold for the very strong $181K price and the car was presented very well. Later in this week at least one more E Type sold well along with a couple of well presented 120's. As a car collector hobbyist and member of JCSNE and JCNA, I love to watch our Brits and all Internationals do well at these auctions and especially the Coventry Classics. The Velocity TV commentators/experts do a good job on explaining these cars and when an E Type comes on sale they usually mention Enzo's remark about them. Bravo!
Joseph wrote on January 19, 2015 - 7:32pm Permalink
Yes sir.......I feel the same way! Bravo to Jaguar for holding their own in such a heavy muscle car world as Barrett Jackson!