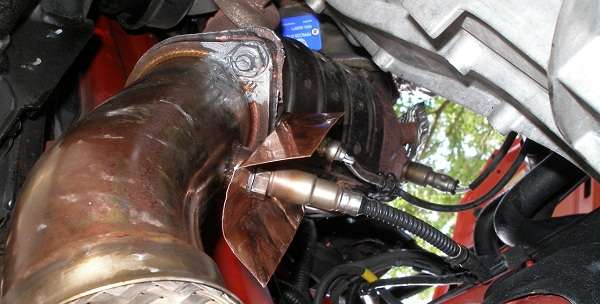 Dispite the installation of a custom built heat sink, the Innovative O2 sensor remains heat sensitive in the high performance Hyundai Genesis Coupe. I have an idea or two for fixing the problem.
Advertisement

I have installed an Innovate LC-1 with the Bosch LU 4.2 sensor now on my last two cars. The first was a ’97 Ford Taurus V8 SHO and the second is my present car, a 2010 Hyundai Genesis Coupe 2L Turbo.

With both, the sensor lasted about three years. Innovate suggests the use of a heat sink and I made one up two years ago for the Genesis. But still, it has failed and the symptom is a reading of 50:1 on the gauge and a flashing led 8 code on the Innovate control box.

Innovate suggested that I mount the O2 sensor in a location where maximum internal body temperature doesn't exceed 900F, with exhaust stream temps not to exceed 1300F. This is relatively new advice from Inovative as they were not so specific before and now even suggest moving the sensor far downstream, near the tail pipe if need be.

Not wanting to relocate mine and before I installed a new one, I wanted to improve the current heat sink. I currently have it located after the factory second Narrow Band O2.

Using the Torque app and the Hyundai Advantage plug-in, I can monitor the second O2 temperature. It will now go as high as 1500F and I see it in the 1100F range with normal light throttle cruising.

So, here is what I had fabricated originally for the heat sink. You can see it in the picture above.

I have decided to add 66% more copper with another sheet twice aslarge as the original mounted just below it. This is about 8” x 4” the smaller is 4” x 4”. 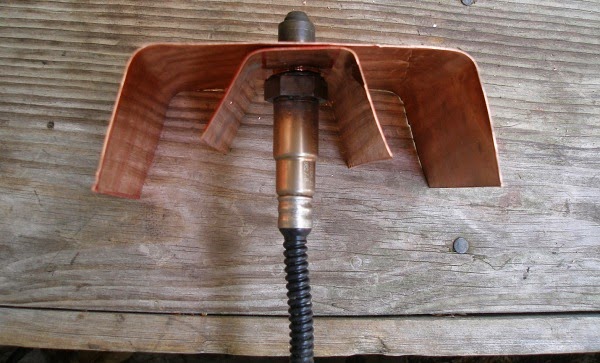 The copper is a .021” thick and easy to work with. You can buy a 12” x 12” sheet on Amazon or similar places online for under 20 dollars. Cutting can be done with a set of hand shears and drilling an 11/16” hole in the center is perfect for the threads. The sensor will thread right into the copper.

Here it is mounted on the car. 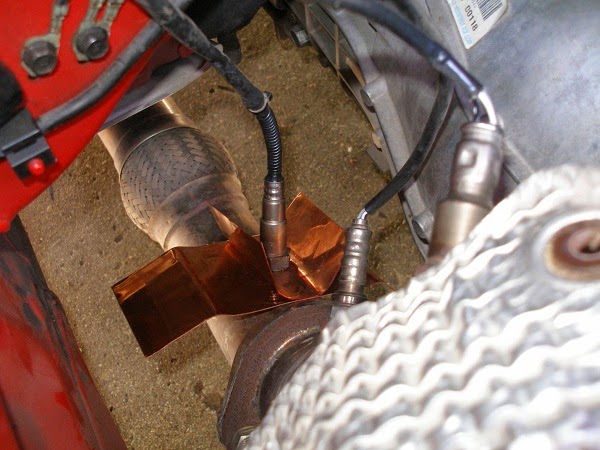 I suppose three years is not so bad, as the sensor can be acquired for under $60 US. Innovate also sells a heat sink that the sensor will mount into but it is rather expensive. I should get the bung extender as it will put the sensor out of the direct exhaust gas. 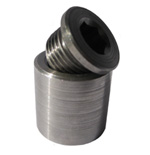