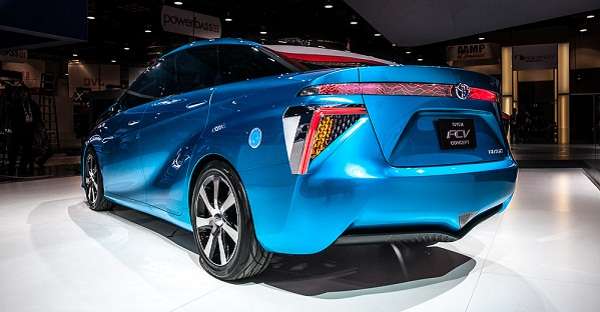 Not that fuel cell cars are dead yet - in fact, their life in the hands of regular consumers is only beginning. Yet the price of refueling seems to be often overlooked in the debate over the viability of hydrogen vehicles, and Toyota’s initial estimates are not encouraging.
Advertisement

Carter told the JP Morgan Auto Conference in New York that this cost to refuel will fall to $30 ‘in time,’ as Ecomento reported. Neither figure inspires a great deal of optimism for the future of hydrogen vehicles, for a very obvious reason.

The estimates put forth by Toyota work out to 17 cents per mile to refuel the first hydrogen-powered vehicles, and 10 cents per mile under the vague future scenario.

To put these numbers in perspective, a typical family sedan averaging 25 mpg costs 16 cents per mile even with gas prices at $4 per gallon.

Looking forward to the suggested $30 target to power a fuel cell vehicle for 300 miles, hydrogen appears to come out on top. Consider, though, that by the time this scenario manifests itself the average gasoline vehicle will be considerably more efficient than it is today. If this hypothetical gas-powered vehicle gets 40 mpg, it will cost exactly the same as hydrogen to refuel it – 10 cents per mile.

Of course, that assumes gas prices stay the same (they won’t.) But then consider that Toyota’s own Prius already gets 50 mpg, and that number will increase with the next generation. Right now, at $4 per gallon a Prius costs 8 cents per mile to refuel. That’s less than half the estimated cost of hydrogen.

You can almost hear the EV advocates cackling with glee: so, how do the estimated hydrogen costs compare with electricity? If you’re in the fuel cell camp, avert your eyes.

Electric vehicle ‘fueling’ costs, if charged at home, range from 2 to 5 cents per mile depending on the efficiency of the vehicle and the cost of electricity. If you drive a BMW i3 and charge it at off-peak hours, you probably are close to the low end. A Tesla Model S charged at standard electricity rates comes in near the high end – which is still less than one-third the current cost of compressed hydrogen, and half the cost of hydrogen’s optimistic future scenario.

Charging at public stations is a different story, as some are free (most prominently Tesla’s superior Supercharger network) but many charge higher rates than you would pay at home.

Speaking of free, Hyundai recognized that its early adopters wouldn’t want to pay more than gasoline to fuel their futuristic hydrogen fuel cell vehicles. The company is giving fuel cards to everyone who leases the new Tuscon FCEV, which is available for 3 years at $499 per month. Takes care of that problem for the time being, but clearly isn’t viable in significant volumes.

Will there be significant volumes?

Not for a long time, and only under the absolute best-case scenario for hydrogen. The price of hydrogen fuel is a big hurdle to acceptance of fuel cell vehicles alongside cost of the car itself, limited refueling infrastructure, and questionable carbon emissions reduction due to the processes necessary to obtain and transport pure hydrogen.

Let me rephrase that: there won't be any emissions reduction from use of hydrogen as far into the future as we can reasonably speculate. This is mostly because 95% of our hydrogen is produced by natural gas, and using carbon-free electricity sources to produce it so it can be converted to electricity to power a vehicle is downright foolish when that electricity could simply be routed directly into the battery of an electric vehicle.

Quite frankly, the refueling costs confirm that there are few real benefits to driving a fuel cell vehicle. Yes, they can go farther and refuel more quickly than electric vehicles – but relative to conventional gasoline cars, the only advantage they have lies with the electric powertrain shared by their EV brethren. They are more expensive up-front (Toyota’s new fuel cell vehicle will cost around $70,000), are no cheaper to fuel, provide minimal carbon footprint reduction, and can only be refueled in a few places.

Of course, all of these disadvantages could change. Most infrastructure will be built and costs will inevitably come down, as we are still only seeing the first commercially produced hydrogen-powered vehicles. But the foreseeable future of fuel cell cars doesn’t look all that good.