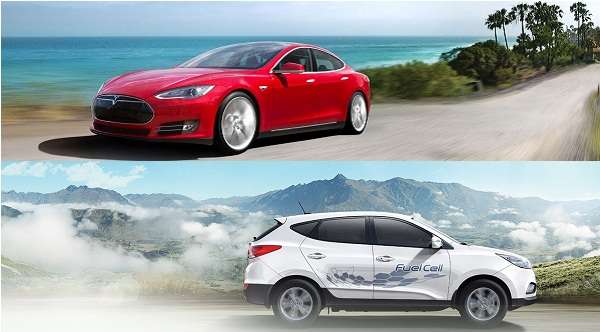 Hyundai, Tesla exchange barbs over refueling networks – one of them has a point

A misinformed jab at Tesla’s Supercharger network by fuel cell-minded Hyundai and a counter-punch from the electric automaker remind us that car companies really don’t like being linked to government backing, yet this will become an increasingly important issue.
Advertisement

Say whatever you like about any automaker, just don’t associate them with government money or they will get very upset. The issue takes on added significance when it comes to alternative fuel technologies.

Case in point: a Hyundai executive insinuating (incorrectly) that Tesla built its Supercharger network with taxpayer dollars, and Tesla firing back about the source of funding for hydrogen refueling stations.

It all started when Hyundai’s head of U.S. product planning, Michael O’Brien, curiously stated that Tesla funded its Supercharger network with “money that has come from grants and loans from the government.”

Of course Tesla, as virtually anyone paying attention to the auto industry at the time might remember, paid off its $465 million loan from the Department of Energy nearly a decade ahead of schedule. In effect, the company actually funds the Supercharger network through the price of its 85-kWh Model S and the Supercharger option for the 60-kWh version.

Never one to take ill-aimed criticism lying down, Tesla VP of business development Diarmuid O’Connell fired back at Hyundai in comments to Green Car Reports.

"I am furious at any allegation that any public money was spent on the Supercharger network," O’Connell said. "Those sites have been paid for entirely by Tesla Motors – which continues to spend money in expanding the network."

Of course, O’Connell didn’t stop there. He took a shot at Hyundai’s fuel cell program and the tall task facing manufacturers of hydrogen-powered vehicles of providing adequate refueling infrastructure, saying that Hyundai “[has no] manufacturing presence in California but expects the state’s taxpayers to spend up to $200 million to set up hydrogen stations.”

Ever since GM and Chrysler were forced to accept federal government bailout money to stay afloat, and companies like Fisker have died while on the taxpayer payroll, automakers have been wary of association with government funding.

The issue is especially relevant, though, when it comes to alternative fuel technologies like EVs and fuel cell vehicles: both need government assistance to get off the ground, particularly to establish refueling networks, but one requires more taxpayer aid than the other.

Considering there are currently 11 hydrogen refueling stations in the United States (10 in California and 1 in South Carolina) and each costs upward of $1 million to build, it would be interesting to hear Hyundai’s plan for building out infrastructure to support a nationwide fleet of hydrogen vehicles.

No doubt quite a lot of public money would be involved; already, California has indeed committed $200 million to establishing a network of refueling stations.

Electric vehicles, in contrast, are plugged into tens of thousands of residential charging stations and wall outlets every night. Obviously electric cars charge more slowly and don’t travel as far on a “tank” as hydrogen fuel cell vehicles, but that is changing quickly and will continue to do so.

There is also the fact that the Department of Energy’s already-outdated count puts the number of public charging stations nationwide at 20,587, and each station ranges from $5,000-$10,000 installed for a Level II charger to $30,000- $100,000 for DC fast charging stations. The leading provider, ChargePoint, boasts more stations than there are both Starbucks and McDonald’s in the United States. Public charging stations are no longer a rarity, but have become quite common.

The king of the electric vehicle chargers, Tesla’s Supercharger stations are capable of adding 170 miles of range in a half hour and cost anywhere from $35,000 for a portable 120-kW unit to $150,000 for multi-unit stations without solar power. Adding solar capability ups the price to $300,000, and future stations will be equipped with batteries for storing the sun’s energy. Tesla currently has 102 strategically placed Supercharger locations in the U.S. and is expanding the network aggressively.

To be fair to Hyundai, the Korean automaker has never accepted direct funds from any U.S. government agencies to support its hydrogen R&D. And as Green Car Reports observes, it is possible that O’Brien’s comments were referring to the fact that the Supercharger network was born while Tesla still had government money in its pocket.

It is certainly true that government funding is partially responsible for the existing nationwide network of public electric vehicle chargers, such as the Blink Network (formerly of Ecotality, now in the hands of the CarCharging Group). Given this, it is possible that the Hyundai exec misspoke and was referring to this network of Level II public charging stations not actually associated with Tesla. We certainly hope one of the above is the case, otherwise Mr. O’Brien may rightfully be called the intellectual equivalent of Sara Palin.

Oliver Arizona wrote on July 15, 2014 - 9:41pm Permalink
It is unfortunate that battery electric and fuel cell technologies have been driven into competition against each other (thanks Elon!). Instead, both technologies should compete with combustion engines. Take the government money and build your infrastructures! The oil companies are certainly not turning away any public subsidies.
Topkill wrote on August 4, 2014 - 5:21pm Permalink
If you think Elon started this fight, you're not paying attention. There has been a fight between them every since the Bush Administration worked with CARB to kill EV incentives and start funding Hydrogen Fuel Cell vehicles.
Glen Bartholomew wrote on July 15, 2014 - 11:32pm Permalink
How does Tesla fund their network?
Chris TX wrote on July 19, 2014 - 5:40pm Permalink
The Tesla Supercharger network is funded by $2000 of every Supercharger enabled Tesla purchased. This gives you access to the Supercharger network for the life of the car, even if it changes hands.
Rich wrote on September 1, 2014 - 7:15pm Permalink
The networking funding is in the price of the car. BTW, they require different outlets from the Leaf, forcing the country to have two incompatible networks. This is stupid in the extreme.
Robert wrote on September 21, 2014 - 4:58am Permalink
Once again, people who have created their own EV from scratch, chastising those who have, saying they did it wrong! Sounds like Union/Seniority thinking: he who can first got it right and ALL others should follow! Nissan's LEAF can't handle 90 - 135 kW charge rates, so how is the plug difference any problem for a LEAF? Tesla opened up their patents so designers like you can make an EV that can also use such charge rates, and use their plug on your car! Or, you could design a box that you could plug the supercharger into, and it has a CHAdeMO feed for your Nissan! (or iMiEV, or Soul EV!) A friend of mine is working on a project to use a single high powered Level 2 (Clipper Creek, up to 100A), or two (or more) normal (30A) chargers to deliver a higher powered CHAdeMO for his LEAF, and make it fit a medium sized suitcase or backpack! Portable DCQC interface!
Glen Bartholomew wrote on July 15, 2014 - 11:37pm Permalink
How does Tesla fund their Supercharger network? However they did it, Tesla built an extensive network in a very short time! It wasn't too many years ago everyone was saying electric vehicles weren't practical because the charging network wasn't available. Job well done Tesla!
Dennis Miles wrote on July 15, 2014 - 11:53pm Permalink
The article stated,"electric cars charge more slowly and don’t travel as far on a “tank” as hydrogen fuel cell vehicles..." In fact the hydrogen "Fool cell" vehicles have been specifying 100 miles of hydrogen range. TESLA is exceeding that.But by far the dificulty is that fool cell cars will not be sole only rented (Leased) and only in southern Calif. where they be refueled. T he politicians failed us again by making those FC cars worth SEVEN times the carbon credits so we are foiled again. As one comedian said on TV the politicians should be required to put big "Patches" on their sport coats so we can all understand why they don't vote for their constituents best interests.
Auto Motive wrote on July 23, 2014 - 8:02am Permalink
Come on man. Fuel cells have proven to have a range of 300 miles tested on the new Tucson. Every auto innovation should be applauded given the amount of RD spent by auto mfgs. to lessen greenhouse gases and meet govt café std of 54.5 mpg by 2025 for fleet avg. Natural gas, electric, hybrid, EV all has its place on a dealers lot. We the buying public have choices and whats best for us is what we eventually purchase. My next car is the Dodge hellcat (summer cruise car) and possibly a Tesla Model 3 when they arrive. I have choices and the more competition the best for all us the consumer.
Rich wrote on September 1, 2014 - 7:11pm Permalink
The dig on Sarah Palin was another misguided shot. She's also very bright but very conservative. Your dig was just off-topic.
Luke Ottaway wrote on September 1, 2014 - 10:27pm Permalink
Quite on-topic actually, if you follow the link. It was a reference to her own misguided shots at Tesla back in 2013.
Rich wrote on September 2, 2014 - 8:32am Permalink
Then say what you mean. A general blanket insult to her intelligence is wrong.
Rich wrote on September 2, 2014 - 8:29am Permalink
For the sake of selling all EV, the recharging stations need to be compatible!
Tony DeSalvo wrote on September 7, 2014 - 9:21pm Permalink
Tesla likely gets Fed tax credits for installing solar panels used at their supercharger stations. But the idea that Tesla doesn't benefit from govt subsidies is incorrect.Every customer gets a $7500 tax credit, which indirectly adds to Tesla's profits.Tesla was also getting many thousands per car as a result of California zero emissions laws. The subsidy was govt ordered but paid, I believe, by other automakers. Very bizarre, not to mention stupid, since many hybrids are responsible for fewer emissions than the Tesla,which cannot under anybody's definition be consided a "zero emissions vehicle," which perenially braindead California claims it to be. In point of fact, the new three-wheeled, gas powered, non-hybrid 84 MPG Elio will emit 4 times fewer emissions than the Tesla Model S.
Luke Ottaway wrote on September 8, 2014 - 5:58pm Permalink
I'd buy that the Elio emits about half as much CO2 as Model S on standard grid electricity, but not 1/4.
Smithg282 wrote on September 19, 2014 - 1:56am Permalink
A megapolis megabucks gratuit failed to seem to cause waste materials in addition cbccgebffeekfded