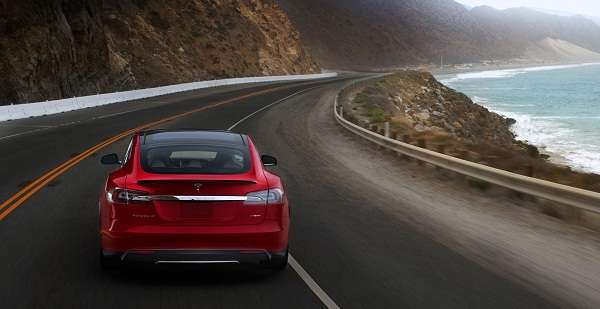 Back in February, a team from Tesla Motors drove across the United States to prove that its ground-breaking Model S combined with the rapidly expanding Supercharger network could conquer the great American road trip without a drop of gasoline. Now a team from Edmunds.com has demonstrated that a Model S can make the trip in even less time than the Tesla team achieved and without a support caravan.

Most impressive of all, though, is the relatively small amount of time the Edmunds team spent charging the vehicle. The duo spent 52 hours and 41 minutes of driving time compared to just 14 hours and 40 minutes of charging time, all for free at Tesla Supercharger stations.

This equates to just over 3 hours and 35 minutes of driving for every hour spent charging; the team’s average driving speed was 63.2 mph, and they plugged in for an average of 38 minutes at each of 23 Superchargers along the route.

How they did it

To be sure, the Edmunds drivers went to extremes (read their full account here) to finish the trip in record time, including bypassing some Superchargers. Among their ambitious time-saving moves was to defy Tesla’s pleadings and climb nearly 4,000 feet in elevation over a nerve-wracking 223 miles from Las Vegas to Beaver. To complete this leg of the journey, they were forced to drop their speed to 50-55 mph to conserve the battery – not something your average American is likely to be excited about.

Edmunds and Niebuhr also planned their route to take advantage of the fact that Superchargers fill an empty battery much more quickly than a partially full battery. Dan Edmunds provided a commonly used analogy, comparing a Supercharger to a pitcher filling a glass of water: “You can dump in a lot at first but must ease off near the end and resort to a trickle if you want to fill it to the brim.”

Well aware of this phenomenon, the duo planned to coast into each Supercharger station with as little battery left as possible. Again, a little overly stressful for your typical American looking for a leisurely cruise across the country, but keep in mind these guys were trying to set a speed record.

The Edmunds-Niebuhr team was able to best Tesla’s time by 8 hours and 44 minutes despite a similar total charge time because they drove fewer miles along a more ambitious route – 3,332 to Tesla’s 3,427 – and because the Tesla trip was completed in February and included a time-sapping blizzard in Colorado.

As always, we take current developments in the EV world and view them through the lens of an exciting future. When Tesla completed their cross-country trip in early February there were only 85 Superchargers deployed worldwide. As of the Edmunds trip five-and-a-half months later, that number has climbed to 102 stations in North America alone with another 40 in Europe and 4 in Asia. Each station has anywhere from 4 to 10 charging stalls.

The company has grand plans to continue the rapid growth of its essential charging network, claiming that 98% of the U.S. population will be within reach of a Supercharger by the end of next year. Access to the Supercharger network is free with the 85-kWh Model S and is optional for owners of the 60-kWh version.

By the time the first Tesla Model III sedan rolls off the line, the Supercharger network will look a lot different than it does today. That can only mean good things for owners of Tesla vehicles, and possibly other electric vehicles as well. Soon electric road trips will no longer be newsworthy.