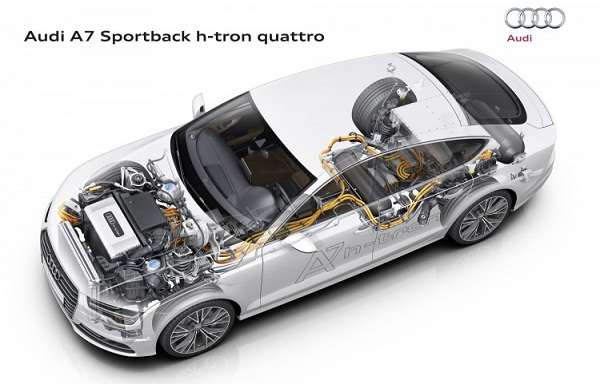 Do hydrogen-electric plug-in hybrids like the Audi A7 h-tron make sense?

Audi presented an intriguing concept at the Los Angeles Auto Show last week: a plug-in hybrid electric vehicle with a hydrogen fuel cell range extender. Could this powertrain be the real future?
Advertisement

For all the friction between hydrogen fuel cell advocates and battery electric vehicle evangelists, the two factions both want the same thing: a low-carbon car driven on electricity rather than oil. Though some may see it as an unacceptable compromise, could the ideal solution be a combination of the two?

Audi shows off the ultimate hybrid

At the Los Angeles Auto Show last week, Audi presented a first-of-its-kind concept that is undeniably intriguing. The Audi A7 Sportback h-tron Quattro, aside from being a mouthful, is a high-performance hydrogen-electric plug-in hybrid that can travel over 300 miles without tailpipe emissions.

It takes a page out of the Tesla dual-motor electric AWD book, with a 114-hp unit in both the front and back. Though the motors are rated at 114 hp, each is capable of a temporary power boost to 152 hp. We know what such a setup did for the Tesla Model S – it is only a matter of time until the system is adopted by other automakers.

What is really interesting, though, is what drives the two motors. An 8.8-kWh lithium-ion battery pack borrowed from the A3 e-tron can provide up to 31 miles (presumably on the lenient NEDC cycle) of driving on battery power. When the battery is depleted, the hydrogen fuel cell range extender kicks in for as much as 310 miles of extra range drawn from four hydrogen storage tanks.

The fuel cell is a stack of 300 individual cells, and can reach efficiencies of 60% with cold-start performance down to -28 degrees C. However, the acceptable temperature range is only 80 degrees C, which Audi says places greater demands on the vehicle cooling system than a combustion engine.

A tri-port DC-DC converter regulates the voltage supplied to the electric motors, as the fuel cell and battery operate at different voltages.

Best of both worlds?

While the A7 h-tron concept is not yet a reality, it is one that is easy to get excited about. Leaving aside efficiency and greenhouse gas debates (as both fuel cell and battery electric cars offer varying but significant improvements over gasoline), a hydrogen-electric plug-in hybrid addresses some of the main drawbacks of battery electric and hydrogen fuel cell vehicles: while the main knock on electric cars is low range and long refueling times, the biggest obstacle for fuel cell cars to overcome is insufficient hydrogen refueling infrastructure.

Since most drivers in the U.S. travel 40 miles or less per day on average, the lithium-ion battery in the A7 h-tron (or a variant with a larger battery) would be sufficient to power most daily driving without ever needing to expend more expensive and less ubiquitous hydrogen fuel. Electricity is the ultimate fuel for urban and suburban driving, as home recharging at night is extremely cheap and convenient.

On the other hand, when the need for a long trip arises, battery power becomes less practical. This is where hydrogen fuel cells hold the advantage: strategically placed hydrogen refueling stations can maximize utility at minimal infrastructure cost, similar to Tesla’s over-the-road model for Supercharger stations.

Hydrogen fuel is quite expensive compared to electricity, but owners are less likely to mind if they fuel up only for the occasional road trip while plugging in for most of their miles around town.

As a concept, it seems like the ideal solution. Battery power for short distances, when plugging in at home is often sufficient, and hydrogen power for long distances, when range and quick refueling times are paramount. Both energy sources send power to electric motors, which compared to the internal combustion engine are undeniably a vastly superior way to move a car down the road. What’s not to like?

Unfortunately, we have yet to mention the magic word: cost. Though other obstacles like complexity, packaging and safety certainly come into play (four hydrogen storage tanks, a fuel cell stack, an 8.8-kWh battery, and two electric motors essentially necessitates a clean-sheet design), the biggest barrier to this concept becoming a reality is cost.

It is not a secret that neither batteries nor fuel cell and hydrogen storage systems come cheap. Combining both is bound to result in one expensive vehicle - any such hydrogen-electric plug-in hybrids would be limited to high-end status for quite a while. Considering that a gas-powered A7 can be had for no less than $65,900, the h-tron version would no doubt be out of reach for most.

On the bright side, Toyota has been boasting rather a lot lately about how it has driven down the cost of its fuel cell system, and batteries are going to get substantially cheaper by the end of the decade. There is just too much potential here to be ignored, particularly for large vehicles. Though battery power may not be the ideal solution for pickup trucks or large SUVs, battery power combined with hydrogen may be the answer.

So to answer the title question, hydrogen-electric plug-in hybrids do make sense...but that does not mean they will be arriving anytime soon, if at all. It would require significant cost reductions and a genuine effort on the part of the auto industry to make it happen, but it is well within the realm of possibility.

Robert Vaughan ... wrote on November 25, 2014 - 7:38am Permalink
......The concept of employing compressed hydrogen gas as an occasional range extender to an otherwise pure battery storage ,electrical driven vehicle , is a positive step away from gasoline and diesel dependant road travel , especially considering that hydrogen powered vehicles will still probably require battery storage to some degree, for storing energy from wheel brake disc regeneration ,and to power auxiliary platform systems. However, as mentioned above, the cost of operating and maintaining parallel systems of this complexity will add significant cost to the end product , in an already very price point sensitive market. Further , hydrogen storage at 350 -700 bar , in addition to the required fuel cell stack unit, will add considerable weight to the platform which will be a parasitic weight handicap for all shorter journeys. If we are considering to combine a fuel cell with a pure EV vehicle, would a hybrid one directional flow battery be feasible ? Metal flow batteries that use pure aluminium ( 99.9%), have potential for high energy density . Aluminium is abundant, can be recycled in a closed -loop, is very safe for transporting and on-platform storage. Downside of aluminium is the energy required for recycling / purifying the aluminium hydroxide sludge resulting from the flow battery process. Although the energy / temperature required ,could be generated by high temperature solar power systems. There are obviously key issues to consider for the management of all energy choices, however , if is essential and positive , that all the various options are respectfully being fully explored and holistically discussed in great detail .
Martin Lee wrote on November 26, 2014 - 2:30pm Permalink
Robert not sure where the extra complexity of putting in say a 10kWh or 20kWh battery compared to a 1kWh or 2kWh battery required for a fuel cell vehicle is going to come from. Extra weight yes but complexity I don't think so.
Robert Vaughan ... wrote on November 27, 2014 - 6:20pm Permalink
My apologies Martin, I intended to convey that hydrogen fuel cells and associated safe storage add unjustified expense, complexity and parasitic weight if the vehicle is mainly used for short journeys. Although that said, the concept may be no different to an ICE range extender, and having the option of using a fuel cell would help to address the paradoxical issue of which is supplied first , the hydrogen vehicles, or the associated refuelling infrastructure.
Robert Vaughan ... wrote on November 27, 2014 - 6:05pm Permalink
....I do agree with you Martin, in that the slightly increased battery capacity adds no extra complexity, and probably not that much extra weight or packaging issues. It was my fault that I did not clarify my comment, which I intended to convey that for many users of this type of system, they may mostly be using their vehicle purely as a plug -in EV for routine short journeys, and may therefore perhaps hardly ever use said vehicle for long journeys to justify the extra expense for a more complex hydrogen fuel cell system ,and associated on board safe storage , which is rarely used, and in that case is mostly adding parasitic load . That said , one could make the same case for a fitted ICE range extender . I do suppose combining a hydrogen FC range extender to an EV , is a good method of introducing Fuel Cells to vehicle platforms, as hydrogen refuelling infrastructure can gradually develop , to address the paradox of which comes first, vehicles or associated refuelling infrastructure.
Someone wrote on November 27, 2014 - 10:35pm Permalink
I don't see what's so special. All hydrogen cars have a battery buffer, for the simple reason that the fuel cells produce electricity which drives the car, i.e. all fuel cell cars are electric vehicles - and since they are EVs it makes perfect sense to use regenerative braking and for that you need a battery to store the recovered power.
dvh wrote on November 4, 2015 - 5:00pm Permalink
The role of hydrogen cars will be a lott more than transportation only. The main drawback of some renewable energy is the fluctuation of the production. Windmills and PV-panels only produce if wind and sun are available. The consumers might not require the energy at these moment, and this is where the hydrogen infrastructure come in. When there is an overproduction of electricity by windmills and/or PV-panels, all batteries of cars who are connected to the grid will be charged. If the production still exceed consumption hydrogen can be produced (with descending prices). and here comes the best part: When there is a short in production of electricity by windmills and/or pv-panels, cars who are connected to the grid can produce power. All cars become local and small scale energy plants. (as long as there is enough power in the battery and H2 in the tanks to get too the nearest station.) This infrastructure make hydrogen the battery which stores the overproduction of energy by windmills and PV-panels every now and than.