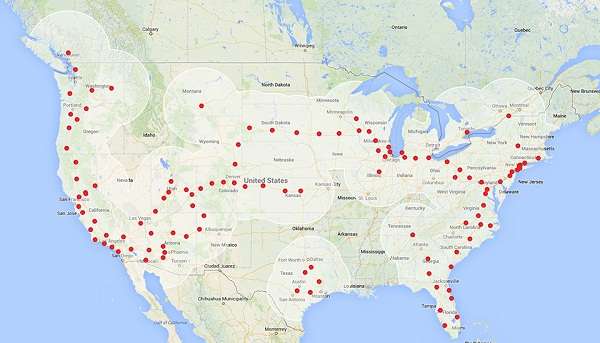 Tesla Motors continues to demonstrate the benefits of an automaker doubling as its own charging provider, as the company opened its 200th Supercharger fast-charge station just five months after opening station number 100.
Advertisement

The Supercharger network is critical to the value proposition of Tesla’s electric vehicles, currently the Roadster and Model S but soon to be joined by Models X and 3. No Tesla vehicle now or in the future will be capable of any less than 200 miles of driving range – but to make long road trips practical for EVs to truly displace gasoline vehicles, the high-power Supercharger stations must be ubiquitous.

Tesla knows this, and as the owner and operator of the Supercharger network the company has been able to grow the infrastructure rapidly. Green Car Reports observed that Tesla has now opened the 200th Supercharger station in Oxnard, California. The announcement comes just over five months after the 100th Supercharger opened in late April, marking a truly impressive growth rate.

However, much of that recent growth has not been in the United States. At the time of the 100th Supercharger opening, 86 of the stations were in the U.S. with the remaining 14 in Europe. Tesla has since directed much of its focus to developing the infrastructure to support its expansion into foreign markets.

Now with 200 stations globally, the U.S. network has grown to 114 Superchargers while Europe has exploded to 66 units. Brought about by Tesla’s recent expansion into China, 19 stations are now operational in Asia.

That works out to 28 new stations in the United States since late April, or about 5 per month. Tesla still officially plans to cover 80% of the U.S. by the end of 2014 and 98% by the end of 2015, but some of those stations far from major population centers will not be used frequently, at least for the first few years.

What makes Superchargers so great?

They are fast and free. While most public DC fast chargers can only deliver power at 50 kW, Tesla’s Supercharger stations pump out 120 kW of power, enough to replenish 170 miles of range in a depleted Tesla battery within a half hour. This makes road trips in a Tesla Model S at least feasible, as opposed to other battery electrics on the road. The best part? Tesla won’t charge you (money, that is) for the electrons.

Each Supercharger station has at least four charging stalls, and some of the sites in more Tesla-dense areas have as many as ten stalls to accommodate current and future demand. Stations can cost as little as $150,000, and the capital-intensive network is funded in part by the $2,000 free for life Supercharger option on the 60-kWh Model S and a similar fee rolled into the purchase price of the 85-kWh version.

Tesla and CEO Elon Musk have said that the Supercharger network was never intended to be a “walled garden,” and they are willing to share the necessary enabling technology with other automakers. No takers have emerged thus far, but that may change as competitors begin to unveil longer-range electric vehicles. Meanwhile, Tesla will continue its methodical cover-the-map Supercharger network expansion alone.

mike w wrote on September 30, 2014 - 7:43pm Permalink
Tesla charges a $2000 fee when you buy your Tesla to help fund the construction of the network and for unlimited use of the Super charger network. For the Tesla S60 you are not required to pay though. Otherwise I think it a great set up. Charge without the hassle of credit cards or membership cards/fees.
Billy wrote on October 2, 2014 - 11:34am Permalink
The $2000 fee is only if you want your 60 kwh Model S to be supercharger capable and does not apply to any variations of the 85 kwh Model S as supercharger capabilities are included with the price.
mda wrote on October 1, 2014 - 10:33pm Permalink
Thanks for the information.
J Purrdey wrote on October 5, 2014 - 1:03pm Permalink
"Each Supercharger station has at least four charging stalls" Really? There must be loads that are only 2 stalls eg. Frejus, France
Luke Ottaway wrote on October 6, 2014 - 6:02pm Permalink
Should have clarified...to my knowledge, each North American station has 4 or more stalls.