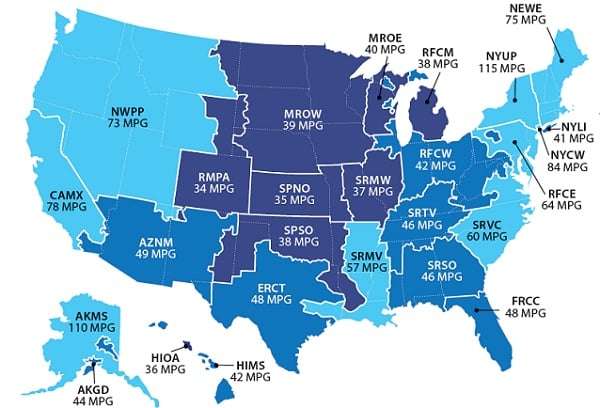 A popular refrain from critics and some news outlets is that electric vehicles may not represent an environmental benefit over conventional vehicles due to pollution from power plants and battery production. It is time to put an end to the misinformation.
Advertisement

A recent 30 Seconds to Know NBC News segment implied that electric vehicles are “not really” cleaner than gasoline cars. Aside from the obvious fact that 30 seconds isn’t nearly enough to tell the full story, the “expert” spouting such unsupported claims can be disproved soundly with some research, reasonable assumptions, and a calculator.

According to the EPA, every kWh produced from coal yields 2.25 pounds of CO2 while natural gas power plants emit 1.14 pounds per kWh. The national average electricity mix in 2013 according to the Energy Information Administration was as follows: 39% coal, 27.5% natural gas, 19.5% nuclear, and 13% renewables and hydroelectric power. The remaining 1% fell under the category of biomass and “other” fossil fuel sources.

This means the average kWh in the United States emits approximately 1.2 pounds of carbon dioxide. Accounting for transmission losses and “feedstock,” for example the emissions associated with the mining and transport of coal, increases the number to about 1.35 pounds of CO2 per kWh.

A typical gallon of gasoline releases 19.6 pounds of CO2 when burned. That gasoline first must be drilled as oil, refined, and transported, which according to the EPA requires multiplication by a factor of 1.25 to yield 24.5 pounds of CO2 per gallon.

To make our comparisons we will assume the national average grid electricity mix, although this clearly will vary by region. Even within a given region the contents of the electricity cocktail will fluctuate over the course of a day. The Union of Concerned Scientists offers an excellent report on EV fuel costs and emissions along with a helpful graphic on equivalent MPG for electric vehicles, based on greenhouse gas emissions, in various regions across the United States that you can find here.

A legitimate knock on electric vehicles is the pollution caused by their battery and motor manufacturing, as rare earth metals are environmentally unfriendly to extract and the production of batteries is energy-intensive. However, Tesla has said that an internal study indicates the immense efficiency gains of Model S offset any added battery-related emissions within just 10,000 miles of driving despite the size of the industry’s largest battery pack by far.

It is difficult to judge the impact of rare earth extraction, but battery production itself isn’t as serious of a concern as skeptics might claim. In addition, once Tesla’s Gigafactory is up and running their batteries will be made with energy largely coming from nearby wind and solar generation, and the environmentally conscious company will have great control over start-to-finish waste and emissions of battery production.

All of this, however, doesn’t even bring up the larger “point” of electric vehicles. Yes, they are currently friendlier to the atmosphere than gasoline cars. But the future of electric vehicles holds so much potential; their batteries new and used will be vital to the smart grid and stabilizing wind and solar power, and their road miles become cleaner as the electricity grid evolves and integrates more renewable energy sources.

In the year 2000, coal represented 52% of U.S. electricity generation. Its share has fallen to just 39% in the last 14 years and shows no signs of increasing. More and more people are going carbon-free by plugging their EVs into electricity generated by residential solar power. Sure, China has been building new coal plants like there’s no tomorrow, but that does not mean we should neglect our responsibility to clean up our own act. Barring an unexpected fuel cell revolution, achieving low or zero-carbon transportation absolutely cannot be done without plug-in electric vehicles.

From a CO2 standpoint electric vehicles will always come out on top by a wide margin, and that margin will only increase with improvements to our electricity supply. It is time news outlets and the public at large accept that fact.