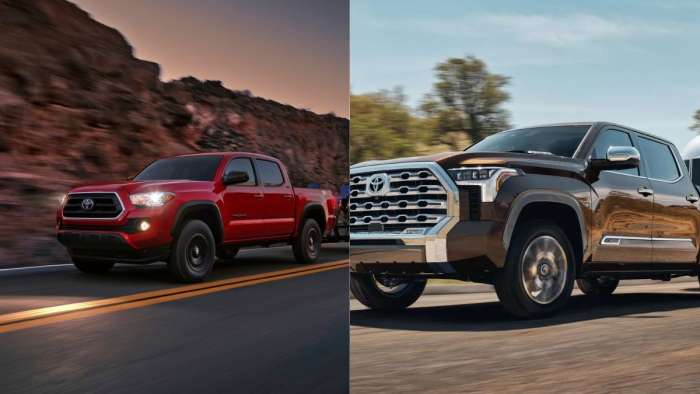 Owners Have Mixed Feelings About Making Switch from Tacoma to Tundra

Ever thought about switching from your Toyota Tacoma to a Tundra? Here are some people’s experiences with making the switch.
Advertisement

Comparing the Toyota Tundra to the Toyota Tacoma is like comparing apples to oranges. Both trucks are different and are not even in the same class. A Tacoma is a light pickup designed for your everyday light truck needs. It should be compared to a Chevy Colorado or a Canyon. The Tundra is a high-performance pickup with a lot of towing capacity and space. It should be compared to trucks like the Silverado or F-150.

However, while in this article I am not going to even attempt to compare the two, I will share what other owners said about making the switch to the Tundra. Some said they liked it, others did not. The thing is, both the Tacoma and Tundra are tailored to meet multiple specific demographics. The Tundra can be a baby hauler while also hauling a trailer. The Tacoma can be off-roading while also having the capability (through 3rd party companies) to comfortably live off the grid with its bed camper.

A recent post on Facebook’s 2022+ Toyota Tundra Owners group asked whether people liked the switch. Rich Nylen said, “Ok so who’s came from a Tacoma to the new tundra!? Pros and cons if any. I absolutely love my Tacoma but really like the new Toyota Tundra’s and the extra space and power would be really nice!” 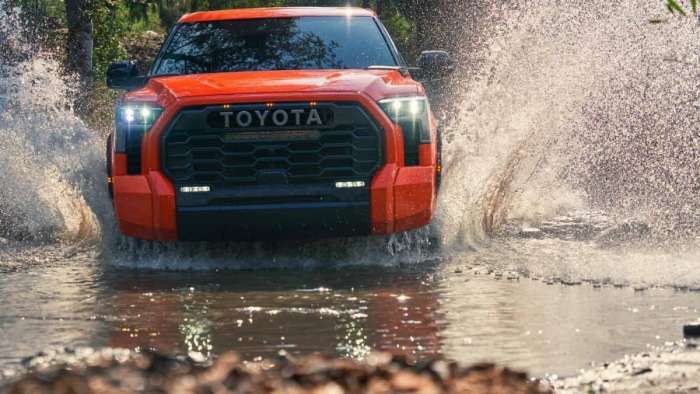 Now, rather than regurgitating what others said, it’s important to know that this will not be a comparison. Some of the comments are comparisons but with prices today, it’s starting to look like you can get a Tacoma for the price of a Tundra anyway. Here’s what a few owners said.

Jake Pischke said, “I had a TRD off-road Tacoma, 2019. The tundra is better in every way, the power and space are great. It drives and feels very similar. Doesn’t feel like a big truck.” For the sake of equality, we are going to disregard the growing Wastegate issue on the new Toyota Tundras which we recently reported on a few days ago.

Now while the Toyota Tundra is bigger, faster, and can haul more than the Tacoma, its fuel economy is significantly less than that of a Tundra. The Hybrid Tundra gets about 21mpg on average. The Tacoma does just a tad bit better by averaging at 23mpg. So if you want to sacrifice small fuel savings for all these other amenities, the Tundra is perfect for you.

Dustin Sebring said, “I loved my 19 Tacoma but I’m in love with my tundra. Gas was just a little better in the Tacoma but was expected since a smaller truck. Tundra definitely pulls my toys better. Tundra also drives much smoother. Definitely, more room in the tundra so makes it more comfortable. I have absolutely no regrets.”

It seems that former Tacoma owners like the switch to the Toyota Tundra. However it’s not that the Tacoma is a bad truck or does not fit the needs of its owners, it simply does not fit the genre of “big truck with the big hauler.” Given, that if anyone upgraded their truck to a bigger stronger one, they would be happy. However, there are many things Tacoma can do that the Tundra cannot. For instance, off-roading a Tacoma is way easier than a Tundra because of its ground clearance. The Tundra has a very wide and low bumper which makes it ideal for towing but not to crawl over rocks.

Whether or not you are in the business of switching from a Tacoma to a Tundra, you most likely will not be disappointed. Former Tacoma owners seem to like it, I would definitely buy a Tundra, and most of our Torque News team seems to like it too.

What do you think? If you have a Tacoma, would you switch over to a Tundra? Let us know in the comments below.