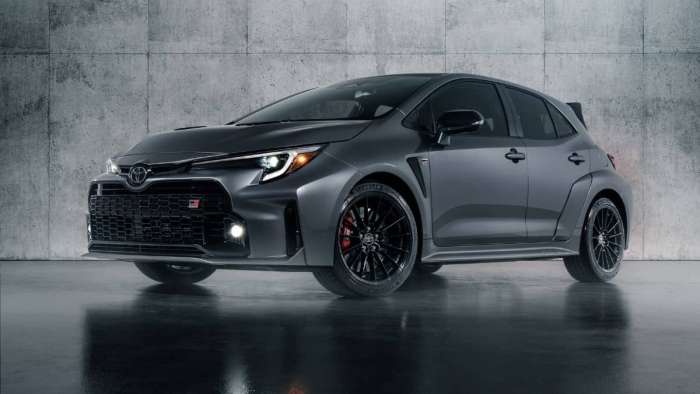 On March 31, 2022, at 9:30 PM EST, Toyota debuted its all new 2023 GR Corolla on a press release. Following weeks of anticipation, speculation, and exploding forum discussion, Toyota has unveiled this car and the specs are out of this world.
Advertisement

My fellow hot hatch lovers, the wait is finally over, and a new wait begins. Toyota has just debuted its all-new 2023 Toyota GR Corolla with many options, cool specs, and such a flawless design. I cannot believe I am saying this but for the first time in my life, I feel a sort of unavoidable rush of impatience sweeping over me and probably you too.
Without taking any more time, I want to jump right into the unbelievable specs of this car. First things first, the transmission. Toyota said that its new GR Corolla will only come in one transmission type, a six-speed manual. The engine is the B16-E three-cylinder pushing a whopping 300 horses. That’s 100HP per cylinder!

Just like any monumental sports car, the GR Corolla has two beginner trim levels each coming with the six-speed manual and free one-year membership for all NASA tracks. That’s really impressive by the way. The Core Model was the red one shown in the press release. It looks nice and probably has a lower window sticker, but it looks like your everyday undercover street ripper. The Circuit Edition looks like something that just got back from 24 hours in Nuremberg. With a lot of active aero and functional vents (take that Civic Type R), race seats and the shift knob has Morizo’s signature on it. It’s as if DaVinci himself signed his Vitruvian Man. 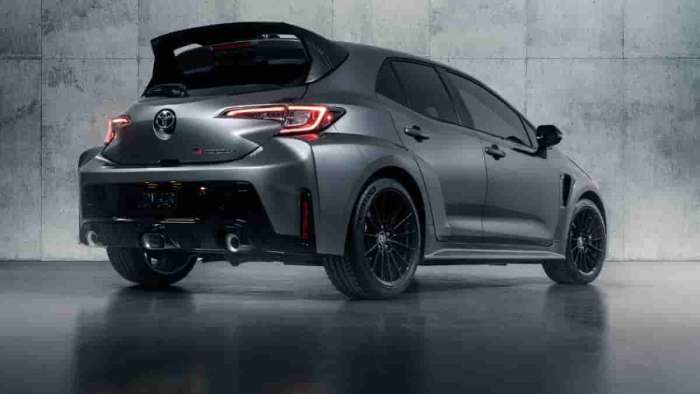 The Circuit Edition also comes with an added paint color, Heavy Metal. As if white black and sunset red weren’t enough. I’m sure you probably got inspired by the geographic shapes in the background and will probably get yours wrapped in bright orange or matte black. I think the heavy metal looks great, but a bright yellow would make it look like the stinger bee it is. Speaking of which, let's look at the interior. Because the last thing you want is a daily driver that hurts your back.

The Interior is just like any other race car-inspired hot hatch, looks uncomfortable but isn’t all that bad. It comes with Toyota’s all-new TSS Sensor system all with an 8in infotainment display. Not bad Toyota. While it may be somewhat comfortable, don’t think the ride feels like a Cadillac. Both versions are going to come standard with Toyota’s GR4 AWD system taken from the GR Yaris. This means that even on dirt this hot hatch will be tearing it up like it's Group B. Did I say Group B? Oh, I meant a whole new GR Series coming later this year. Yes, that’s right, Toyota also announced that with the addition of the GR Corolla to the GR Family, we will be seeing a whole cup series focused on GR cars only.

While we all want this in our garage as soon as possible, you’re going to have to wait. The Circuit edition won’t come out until next year and the Core Model won’t come out until this summer for the 2023 model year. Even so, nobody knows the price. We reached out to Toyota’s press contacts for any information regarding the price and still have gotten no answer. 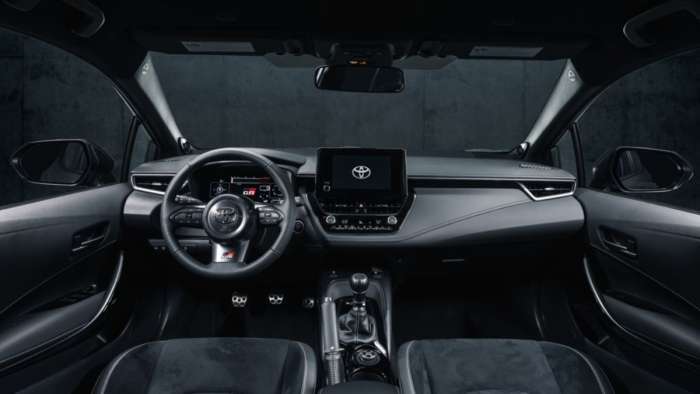 With all this compacted information, one lingering question remains. What car can we compare this to? To take this question seriously, we must first look at the specs and see that there aren’t a lot of hot hatches, even the sport trims, that can compare to the GR Corolla. For instance, the GR Corolla has functioning vents, the Honda Civic Type R that we got a few years ago doesn’t. This car is designed in a grey area between, “honey I’m taking the corolla to work,” and, “I’m pulling in I need to pit.” The fact that someone can daily drive this vehicle to work, and then slap on some race tires and take it to the track within a matter of won’t give us a lot of wiggle room to compare other cars to it.

Yes the Honda Civic Type R is a great hot hatch for the track but the amount of usable tech embedded in the GR Corolla is just unbeatable. I mean having active aero alone should be enough to blow the Civic Type R out of question. Don’t get me wrong I love the Type R as much as the next guy but if the price comes out to be the same, I recommend going with the GR Corolla. The specs on this car are truly amazing and I think that this is just one of those cars that are going to go down in the books as one of the greats.

What do you think? Did Toyota knock it out of the park with the 2023 GR Corolla? Do you think the specs alone will be enough to give this car the glory it deserves? Let’s start a discussion in the comment section below and follow us on Twitter for more updates as they come.