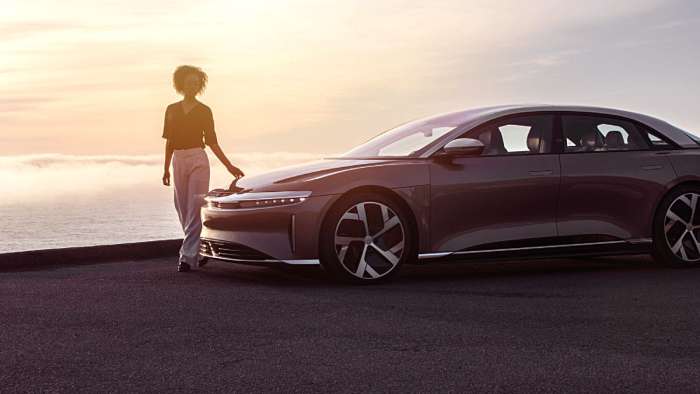 Lucid Air Pure Is The Best Value On The EV Market

Lucid Air Pure is one of the best bangs for your buck on the EV market. You get a ton of features, while also getting a very luxurious car with incredible range for $77,400 before the $7,500 EV tax credits. Find out why Lucid wants t create an even more affordable vehicle and what this means for $LCID investors
Advertisement

The cheapest of the 4 Lucid Air models is anything but cheap. With an EPA range of 406 miles per charge, this vehicle shows exactly how Lucid Motors can quickly decrease the prices of their vehicles because of their battery technology. The Lucid Air Pure does not have the beautiful glass canopy as the other models, but it does have a very luxurious metal roof.

Customers of the Lucid Air Pure, will have to pay extra for the DreamDrive Pro, the Surreal Sound System and certain colors will be an additional cost. This is pretty standard with any vehicle though. The LucidAir Pure is priced at $77,400 and with electric vehicle incentives, you could save $7,500 bringing the total down to $69,900. The LucidAir is the best value for an EV sedan if you are looking for a Luxury feel at a very reasonable price.

A more affordable LucidAir would be a game changer for Lucid Motors. They pride themselves on being the best luxury EV on the market and that attention to detail that led them to achieve early success and win award after award, will allow the brand to cash in on many reservations for a model that costs under $50,000. Since Lucid is all in house, they can achieve this sooner than many analysts believe to be possible.

Lucid Motors has stated that their plan is to create cheaper vehicles. CEO and CTO Peter Rawlinson said that he believed to see a $35k vehicle in 4-8 years. Four with a partnership with a larger company. Lucid Motors was rumored to be in talks with a silicon valley company, and Apple was a real possibility.

Lucid Motors ended up signing a partnership with Nvidia, but it does not close the door on an Apple partnership just yet. Apple is still slated to announce the winner of who will manufacture the apple car in late 2022. Lucid may not win the production contract, but could potentially license out their battery technology to the Tech Giant.

Lucid Motors most expensive vehicle is $179,999 Grand Touring Performance, their most affordable vehicle is $77,400 the LucidAir Pure. It comes equipped with 480 HP, same as the Model 3 and a whopping 406 miles of range. Dream Drive is included but not Dream Drive Pro.

The Lucid Air Pure also has a smaller battery which gives extra leg space for backseat passengers because there is a wedge by the feet.

Lucid Motors estimated that the LucidAir Pure would come out in the second half of 2022 on their Q4 Earnings Call. On the Website, Lucid Motors states that the vehicle will come out around Q4 of 2022. That is very exciting for Lucid Motors reservation holders. This vehicle is highly regarded and is a significant step for Lucid Motors to achieve a more affordable vehicle.

Senior Vice President of Design and Brand at Lucid Motors, Derek Jenkins has said that Lucid wants to have a sports car, but wants to create a much more affordable vehicle before then. Lucid is starting to create more models and investors sound very excited.

My Thoughts On A More Affordable LucidAir

I absolutely love the Pure because it is Lucid Motors first attempt at achieving more affordable vehicles. I believe that with Lucid Motors in house production and technology, Lucid could make a very affordable vehicle while other EV manufacturers are increasing prices because of supply chain issues and inflation. Lucid Motors has their sites on a similar plan that Tesla had, but wants to avoid production hell for a prolonged time.

Paul Filidei wrote on April 23, 2022 - 7:24pm Permalink
lucid is a great EV, proved that with first release..It will take time,, but Lucid will soon become a major EV player..go Lucid.
No One Really wrote on May 4, 2022 - 10:37am Permalink
Lucid will be the next Tesla. Proprietary motor design, wonder box, other manufacturers wanting to license technology, staffed with the best engineers from Apple, Nvidia, auto sector, etc. Stock price to $1000 per share in ten years.