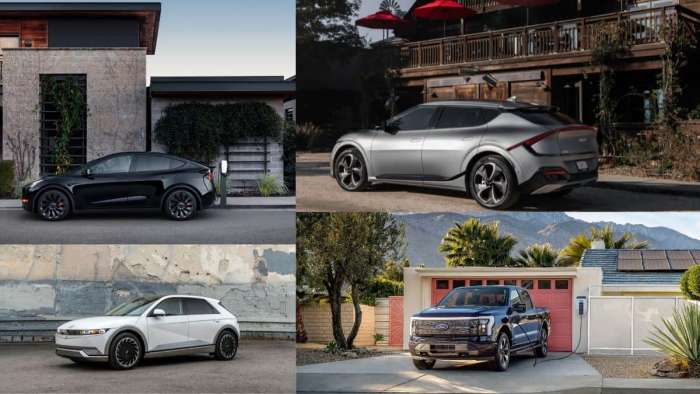 How Fast Is The US Auto Market Going To Switch To Electrified Vehicles?

The other day I shared a nice lunch and conversation with an older stranger at a winery. We talked about wine, the stories behind each bottle and label, and after a while the conversation turned to electrified vehicles. He was very interested to hear about my experiences and thoughts as he was considering purchasing his first EV or plug-in hybrid for himself, or possibly for his wife.
Advertisement

Apparently this man’s wife has a strong dislike of hybrids and electric vehicles. I asked why he thought that was and he said it was because they were not performant enough for her tastes (actually he didn’t use those words, but that’s what he meant). His wife has a lead foot, apparently, and she thinks of all electrified cars as underpowered and slow because of a bias they formed while driving behind that venerable old hybrid trailblazer, the Toyota Prius. He pointed out that every time they are behind one, the Prius seems to be driving slow. This is a stereotype I have heard many times before. So I did my level best to explain just how performant EVs, plug-in hybrids (PHEVs) and hybrids can be compared to their stereotypes about the Prius. I think he truly believed me, in short, but he wasn’t so sure his wife would ever change her mind. I suggested he take her for a test drive in an EV sometime and he said he’d definitely look into doing that. I hope that he follows through because I truly believe the driving experience of many EVs and some PHEVs is truly better in most regards compared to traditional gas powered vehicles. All that torque, the quiet ride, the substantial feel of the vehicles as they hug the road with most of their weight down low, the regenerative braking/one pedal driving experience, and the list goes on.

All of this leads me to a question: How quickly is the U.S. really going to switch to electrified vehicles? Given that 37 percent of Americans still think you have to plug a regular hybrid in to charge it, I feel like we still have some major educational hurdles to cross before we can fully transition to plug-in vehicles. But consumer awareness isn’t necessarily the primary driver in this transition, even if that may seem counterintuitive. For the first half of 2022, 11 percent of all EV sales (globally) were in the U.S., second only to Europe (at 28 percent) and China (56 percent), according to Automotive News Canada. While the U.S. is the smallest of the 3 major markets for EVs, we still represent more than double the rest of the world’s demand (minus China and Europe). What’s more, the pace of our adoption of EVs is increasing rather rapidly, from about 1.9% of all cars sold in the U.S. in 2019, to approaching 7% in 2022 (and we may exceed that figure in the remaining weeks of 2022), according to electrek.com. If that rate of growth continues (roughly 50% per year), EVs would account for 100% of all new vehicle sales before the end of the decade. That isn’t going to happen, almost certainly, because the supply chain won’t be able to keep up with that rate of growth, but regardless you can see why this has traditional gasoline powered car makers making a lot of investments in battery plants and electric motor production. They must either adapt to the changing market, or fade away.

I have previously written about which traditional car makers are vying for leadership in US EV sales and to challenge the dominant EV brand, Tesla. Those same traditional automakers, Ford, GM, VW, and Hyundai/Kia/Genesis are the ones selling the most EVs, after Tesla. And depending on how you break down the numbers, you see the beginnings of some interesting trends. First, according to electrek.com the best selling non Tesla EV model through the end of Q3 2022 is the Ford Mustang Mach-E at 28,089 units sold, which means it is the 3rd best selling EV in the U.S. market. But to put things in perspective, the 2nd best selling EV, the Tesla Model 3 sold more than 5 and half times as many units. The number 1 best selling EV is also a Tesla (the Model Y), as are the 4th best (Model S) and 6th best (Model X). So the best way to really look at this is collectively, by brand or automotive group. When we do that, while Tesla is still clearly the uncontested leader, with over 390,000 vehicles sold in the US through Q3 (or nearly 68% of the market), we see that the 2nd place brand or automotive group is Hyundai/Kia/Genesis with about 8% of the US market. The rest of the top 5, in order are: Ford with a little over 7% of the market, VW (including Audi and Porsche sales) with 5% and GM with almost 4%. That means all other EV makers share roughly 8% of the market, and that the top 4 brands/automotive groups other than Tesla controlled approximately 24% of the market through the end of Q3. 24% adds up to over 138,000 units combined. Those same 4 brands/automotive groups sold roughly 100,000 units combined in 2021. If Q4 combined sales were only an additional 25% of sales through Q3, then those 4 would have around 173,000 combined EV sales by year’s end, or very roughly a 73% increase in sales, year over year if that estimate holds up.

Ultimately, this 73% figure, perhaps more than how much Tesla’s sales have grown (which will likely be somewhere between 150,000 and 200,000 additional US sales, year over year) or how much all the other EV makers sales have grown, might show us how fast the US market is going to switch to electrified vehicles, That is because it is most likely this group of brands which is most aggressively pursuing the sales leader that will diversify the market, attract new customers and capture the most sales growth (at least on a percentage of market share basis). So what does it mean in the end? I think it means we are likely to experience a faster pace of change than most of us think.

Michael McCormack wrote on November 23, 2022 - 9:07am Permalink
U guys seem pretty honest but the media in general is pushing electric cars and trucks, probably with government backing, YouTube etc. They are not ready. The electric grid does not have enough power to operate if we went all electric and they won't any time soon. They are shutting power generation rather than increasing it on purpose. If u went all electric you would see the charging rates go up quickly. You could easily limit driving with the control of electric grid. I had to drive from Oregon to Texas six times this year about 2800 miles by myself. I drive a 2021 trx one of vehicles with worst milage. No trouble getting gas and consitingly did it in 24 hours towing a trailer. If u were trying to do that in an electric truck quickly it would be a nitemare.
Justin Hart wrote on November 24, 2022 - 3:52pm Permalink
I think it is worth pointing out that it is absolutely impossible for us to switch to 100% EVs (or even 100% EVs and PHEVs) in a short period of time. It will take a few decades, at least, before we can achieve something resembling that. There is adequate time to do any expansion and maintenance of the electrical grid needed to support that achievement though. Also remember that while some generating capacity is being taken offline, usually dirtier forms of generation like coal, there is also fairly rapid addition of renewable generation capacity being added in the form of wind and solar (increasingly with storage of one kind or another). Here’s a good article that seems unbiased in my opinion. And note, I think that you are voicing legitimate concerns (re: the grid’s ability to support a massive increase in demand from an electric fleet) and we certainly are not where we need to be yet in terms of charging infrastructure or range on a full charge for all types of EVs, either. https://cars.usnews.com/cars-trucks/features/can-the-nations-electrical-grid-support-electric-cars