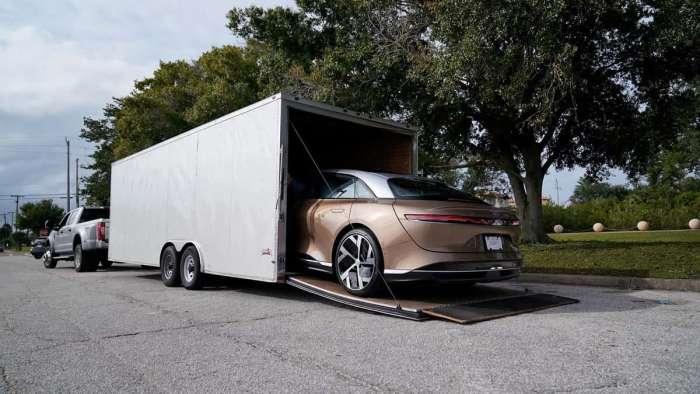 From Seattle to Chicago to Atlanta, Lucid Airs are making their way to customers across the US in ever-increasing numbers.
Advertisement

Lucid kicked off customer deliveries of the Air EV sedan in October with the inaugural Lucid Rally and has been shipping out cars ever since. As the tweets below illustrate, Lucid is spreading deliveries around the country with some vehicles delivered direct to customers' houses in enclosed shipping trailers and some electing to take delivery at their nearest Lucid Studio.

Many of the cars have been delivered to areas with nearby studios and service centers, though the Air that made its way to Montana is fairly far from Lucid's support network with its nearest studio in Seattle and the nearest service center located in California. It seems that this is just the price one pays for being an early adopter in a rugged state.

Lofty Goals
Deliveries like this are the first step in ramping up production for Lucid to meet its targets for the coming years. The company has promised to deliver 20,000 Air sedans in 2022 and 90,000 vehicles in 2023 thanks to the 2.85 million square foot expansion currently underway at its Casa Grande, Arizona production facility.

Check out a selection the Airs that have found their way to their owners so far:

A beautiful fall day for a home delivery in Chicago. #LucidOwnersClub. pic.twitter.com/y24KjuBvYs

The #LucidOwnersClub is becoming quite popular. Say hello to the latest members taking delivery from our Beverly Hills studio. pic.twitter.com/gvcjGPLxjT

#LucidAir arrives in the Emerald City. A warm welcome to new members of the Seattle #LucidOwnersClub. pic.twitter.com/wTUmCulZ4N

Hello Colorado. The Rocky Mountains get its first member of the #LucidOwnersClub. pic.twitter.com/2QmngJZ4dV

A Lucid Dream for the city that never sleeps. #LucidOwnersClub #NYC pic.twitter.com/elxBUIiTno

Dreams can appear anywhere, anytime - even at home. Ultimately, it’s all about our customer’s desire. Congratulations to these new members of the Florida chapter of the #LucidOwnersClub. pic.twitter.com/h4h3tYq8rR

Jasen Wenzelburger wrote on November 20, 2021 - 10:19pm Permalink
The Seattle Showroom has a service center attached, just not a dedicated location.

LG's New EV Battery Plant Is a Welcome News for Tesla
Tesla Giga Berlin's New Hurdle: It's Not Only the Gov't, but Now Tesla Itself
END_OF_DOCUMENT_TOKEN_TO_BE_REPLACED