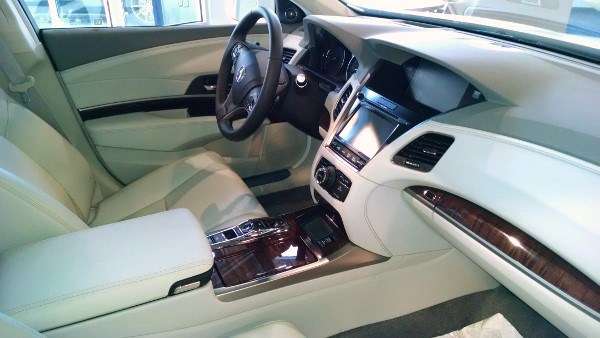 Strangely enough when you search the internet for 2015 Acura RLX Sport Hybrid price and specifications, you won’t find them on Acura’s RLX site, yet I’ve seen one in person at Kendall Acura of Eugene, Oregon.
Advertisement

When does a $60,000 luxury performance sedan cross the line of economic justification and exceptional value? Enter the 2015 Acura RLX Sport Hybrid.

On first glance other than the Hybrid plack discretely dawning Acura’s largest and most expensive premium four door sedan, one can’t tell the difference between the gasoline fueled RLX and RLX Sport Hybrid; both are a marvel to behold. Splendid, exceptional examples of Japanese manufactured engineering meets understated luxury.

Last Saturday I had the pleasure of visually beholding a 2015 RLX Sport Hybrid dressed in Pearl White on a parchment white leather interior, with generous applications of wood-like dash trim, door and center console detailing, and just a spattering of burnished metal and high detailed stitched leather surfacing. Discretely wiping the drool from my chin, I took a quick glance of the specification and price sheet; Impressive.

I was surprised to find the 2015 Hybrid to be priced in sync with the RLX Advance Package gasoline engine variant at $60,845. Well, $400 higher than the I.C. stand alone RLX. Acura PR had assured me that Japan was intent on shipping RLX Hybrid, now I’ve actually put my hands on the wheel of one.

If you can find Acura’s starship featured locally take a few minutes to study what is arguably the greatest value found in a premium luxury performance sedan today.

Let’s go directly to where the pedal meets the floor board. In the case of RLX Hybrid, peak horsepower and torque is achieved in combination hybrid sport mode. With a stated combined hp rating of 377 and 491 ft-lb torque, nothing touches RLX Sport Hybrid for mid range torque in the metric cruiser class. The EPA estimated 30 mpg combined is simply the icing on the cake.

I spent a week in San Francisco driving the 2015 RLX Advance Package, enjoyed the car and found its interior comfort and quiet to be exceptional, with the stated 310 horsepower 3.5 L V6 responsive and relatively fuel thrifty. Read our San Francisco drive experience here.

I’m a different kind of car nut. I always start my review in the back seat of a premium car. While I did find RLX hybrid to feature exceptional seating comfort and excessive leg room, I also found rear cabin headroom to be a bit of a tight fit for this 6 foot 5 inch journalist. Move 2 to 3 inches inboard from the passenger door, not a problem. The quality of the interior fabric, seat stitching, laminate to soft surface interface and carpet density is arguably best in class; as is the visibility forward.

I do appreciate the side door pull-down sunshades. The rear seat in RLX is an enviable position to be in. We do lose some trunk space in RLX Hybrid, that’s where the battery pack resides.There’s no pass through capability in RLX Hybrid,that’s the price one pays for exceptional fuel economy and quiet.

We'll follow up in a day or two with a captain’s chair review of Acura’s state of the art passive and active sound cancellation, personal connectivity, drive stability and safety features.