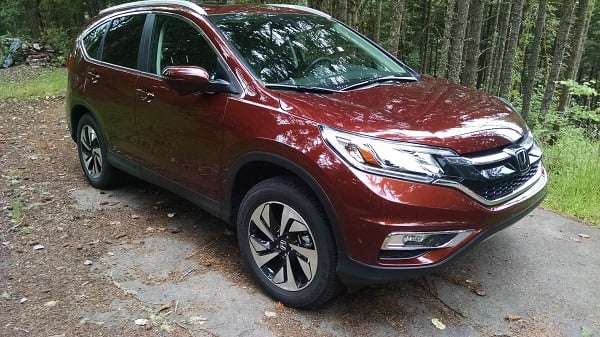 10,000 miles and close to a year after its initial launch, we revisit our original introduction to Honda’s best selling SUV. So good so far.
Advertisement

New is new, and for most automotive journalist looking for a real-world assessment of a manufacturer’s newest car, light truck, or upgraded model offerings, “New” can be problematic.

For Torque News, participating in Honda’s Huntington Beach National Roll Out Event of the best selling SUV in North America was an eye opener. The major “Refresh” of CR-V took the driving public and automotive press by storm. Great! But how has Honda’s pre production CR-V held up after 10,000 miles of hard-press-corp driving?

This week I received delivery of perhaps the most photographed and media scrutinized 2015 Honda CR-V Touring Edition on the road today. With 10,000 miles showing on the odometer, without looking too closely, our test mule looks darn near as good as it did the day Honda rolled it off of the truck in Huntington Beach, California.

At the time, not a fan of subcompact SUV, I had just returned from the Santa Cruz Mountains were a week before Nancy, the crew and I had traversed the back roads of the Loma Prieta ridge, behind the wheel of a 2014 CR-V--FWD; a good car, but not a great car. None the less, while photographing the “Kings” Honda Ridgline on the back roads of Santa Cruz, we learned a bit about 2014 Honda CR-V and what we would do to improve the best selling SUV of any size or brand in North America.

Much to my surprise, Honda would grant all of my wish list and more, with a major cosmetic and powertrain upgrade of 2015 Honda CR-V, while holding the base MSRP,($23,445-$32,895) adding a longer list of standard comfort and safety features, upping the fuel economy while increasing horsepower and torque. What was not to like?

I was sold, as was the buying public and the majority of the automotive press. American Honda Motors delivered a mid-cycle refreshed CR-V just short of a total redesign, and did it without measurably increasing the $ bottom line. A bit of personal disclosure: Being an “Old-School” crossover owner has its up and down side. For one thing, (my personal driver) the Chrysler--Mercedes Benz manufactured Pacifica Tour sitting in my driveway was arguably the most advance crossover of its day, and came with the price tag to justify Mercedes Benz participation in the joint venture.

With an MSRP approaching $45,000, 10 years prior, and everything but today’s touchscreen personal interface and active safety features, the Pacifica remains my personal benchmark when assessing SUV and crossover offerings. In today’s inflated dollar, that’s $65,000 dollars.

Honda’s CR-V is not a full, nor midsize SUV. It doesn’t come equipped with living-room size captain’s chairs, cathedral-like ceilings or 300 horsepower under the hood; that’s a given. So, when reviewing Honda CR-V and SUV, crossovers in CR-Vs segment, I personally back up 30 years or so and mentally revisit the sub-compact SUVs of the 1980s and 1990s.. I owned a handful of those too, one being a Geo Tracker, an original Rav4 and a Suzuki XL-7. That’s where the compact SUV segment originated, CR-V represents the pinnacle of where the segment sits today.

Honda has taken the sub compact utility light truck based concept , supersized it, pushed it to the next level in engine performance, comfort, safety, fuel efficiency and driver convenience, while holding the price point down to a financially attainable level, and increasing horsepower, torque and fuel economy by close to 50%

What sets 2015 Honda CR-V above the competition? In an automotive world of slight nuance-difference between competitors, it’s most often the manufacturer that can package the greatest customer-perceived value for the $ spent that takes the sales lead in the segment. Honda CR-V has held the #1 spot 10 out of the past 13 years. Well, I’ve had more than one fellow automotive writer and Torque News readers pull me out on the carpet for writing what they perceive to be ad-copy for American Honda Motors. What can I say? When a product looks good, drives exceptionally well, is exceptionally reliable, features the best standard-featured safety measures in the segment, while recording the best EPA MPG average in the SUV class, I’m going to write a positive review about that vehicle.

Until “Someone” builds the perfect SUV...

Initially, when taking the wheel of CR-V: At 6 ft 5 inches tall, I fit comfortably in the driver’s seat, front passenger seat, and 2nd row bench. I find little to no compromise of leg-knee position when driving 2015 CR-V. The power driver’s seat in CR-V Touring is infinitely adjustable, comes with a 2-position memory toggle, heat and power activated slides.

On the downside, I find the leather seats in our 2015 test ride to be a bit on the stiff side, the interior noise level less than silent, and a slight, ever-changing, intermittent underlying vibration when sitting at a stop light or driving at low speeds. Do I find any of the aforementioned notations problematic or extraordinary for a compact economy SUV? No!

Great fuel economy sans the sacrifice of horsepower and torque

Add to the mix the best working CVT transmission in the segment to a super low emissions, Earth Dreams ™ 1-VTEC 4 cylinder engine that produces the highest average fuel economy in the segment without sacrificing mid range torque, an aesthetically pleasing, well balanced, and ergonomically correct interior of class-setting utility and voluminous proportion, one discovers the reason behind 2015 Honda CR-Vs record sales; CR-V is an exceptional drive and ownership experience.

In Honda’s best selling SUV, I rediscover a fun to drive, easy on the wallet and exceptionally reliable compact SUV driving experience. Maneuvering in and around city traffic is a breeze, as is parallel parking with the assistance of Honda’s stellar backup camera and left-side blind spot watch. There will be no more guessing where the curb is, I like that!

For drivers of shorter stature, CR-V affords a high-view-seating position, ease of interior re-configuration, near flat deck attributes, with enough power to haul all that life brings with it. Wash it off and take it out on the town. CR-V is up to the task. I’m personally taken aback by the ease of folding the rear passenger seat into a “Near” flat cargo deck. A kid could do it, and they probably do.

This took no more than 3 minutes to do so, and with the “Touring” variant CR-V, comes equipped with an electric lift hatch that may be activated with the key less entry fob, or from CR-V’s dash. I also like the power door locks, windows and sunroof. Personal connectivity, touch screen and Hondalink ™ , yes, its all there

Honda continues to evolve voice command activated features throughout the lineup. In my case, I tend to stay off of the touchscreen while driving, opting for “Steering wheel” and road-eye-contact personal interface. For everyone else, I recommend spending an hour or so with your owner's manual. Learn these system while sitting in a parked position. I find that after a few hours of practice( both on the part of the driver and Honda’s voice recognition) system tend to work pretty well. Slightly south of “perfect,” Honda’s working on it!

O.K., enough with the advertising-like diatribe. 2015 Honda CR-V is slightly south of perfect. Here’s a few changes that I’d like to see in 2016. No worries, your slightly used CR-V holds one of the highest residual values in the industry. And, if you’ve experienced some minor flaws, one time dealership fixes or an annoyance or two, welcome to the world of car ownership, imperfection comes with the territory.

As reported by a minute percentage of the 132,000, 2015 model year Honda CR-V Earth Dreams engine powered, CVT equipped SUV owners, there exist an inherent slight vibration felt through the steering wheel and driver’s seat of CR-V when sitting at idle in drive. And...when cruising at low speeds when the CVT drops the engine rpm below 1100 or so.

Honda says they're working on a universally accepted fix for the reported problem; I’m taking Honda’s word for it

Some drivers have complained of excessive vibration, while I did note a vibration that I contribute to the interaction of the CVT transmission with the direct injected, 1-VTEC 4 cylinder engine, after less than 4 hours of driving our very seasoned press fleet CR-V, the vibration for me and my passenger fell into the realm of normal operation, background noise, and stereo dust.

Would I like to experience a CR-V as quiet as the Acura RLX Hybrid?, certainly. Let me know when Honda or any other brand manufactures one for under $32,000.

2015 Honda CR-V presents the driver and passenger a comfortable drive-ride environment, and a larger car ride-feel due to an updated suspension ACE ™ body structure and amplitude reactive dampers; I appreciate that. CR-V presents a decent “ride” characteristic, yet falls short of the very smart AWD drive, road traction and subsequent handling of 2016 Honda Pilot. I know that this is a tall order, but for me, although much improved over previous model years, I’d like to see Honda push the CR-V envelope with reduced body roll, truer road tracking and perhaps just a bit tighter steering feel.

The automotive engineer in me understands the manufacturing cost and weight saving attributes of mold injected plastics; we find copious amounts of it used inside, outside, and around 2015 Honda CR-V.

Most of the plastic used is visually pleasing, nice to the touch and securely blind fastened, some is not. Again, because we’re driving a used 2015 model with 10,000 miles showing on the odometer, there is a bit of wear and tear evident in and outside of the vehicle; most of it very minor.

One thing that would drive me over the edge, especially if I was dealing with children on a daily bases is scuff marks and fingerprints. On inspecting CR-V I discovered several contact areas prone to scuffing. Notably the lower rocker panels, door entries, rear hatch entry and rear cargo hold; all covered in a smooth matt-black or gray molded plastic. This needs to be upgraded to a non scuff surface.

Our CR-V Touring is notably the “high end” of the compact or midsize SUV crossover segment. dollar for dollar Honda packs more tech rich personal connectivity and safety features into their CR-V than the competition does. In looking at the competition, while we do find domestic and import brands that offer similar packaging and long-term reliability, all fall short of CR-V in exterior styling, ease of interior passenger to cargo deck transform-ability, ease of city maneuverability, and standard feature bang for the $.

In closing, after driving CR-V over gravel roads, two lane country sweeps, in the city and over Oregon’s Interstate 5, I, like the several million CR-V owners on the road today, walk away mostly satisfied with its fit and finish, interior comfort, utility, road performance and stellar safety features.

Honda CR-V delivers as promised. While arguably not the perfect vehicle for everyone, until the perfect under $35,000 compact SUV comes along, my vote goes to CR-V, its that good!