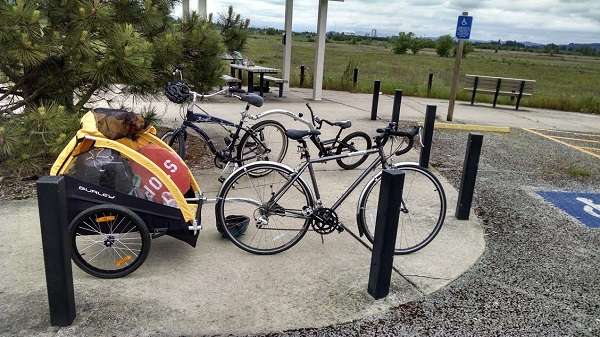 Personal transportation sweet spot: Somewhere between the bicycle and EV

Stepping back onto the saddle of a kinetic energy powered 2 wheeler sparked an idea or two as to the viable future of personal transportation.
Advertisement

O.K., I’m going to throw my proverbial dangling appendage into the wringer, if you will. Most of us don’t “need” an internal combustion motivated long range 4 wheeler on a daily basis.

While that may be a self-important-ego-debasing revelation for one that makes his living reviewing today’s ever-evolving field of impressive, tech driven, low emissions automobiles and light trucks, it is a realization that came to me over the weekend after dusting off and riding my 1980 s something, Trek 800 bicycle. Turns out that there’s a lot of people riding out there.

According to statistics, 47.8 million Americans road bicycles at least one in 2014

Now, please believe me when I tell you that I remain excited as to the developmental leaps and bounds reported on a daily basis from what I and others refer to as the “ New golden age of the automobile.” It’s an exciting time in the development of internal combustion and alternatively fueled and motivated 2 and 4 wheeled vehicles.

With (almost affordable) 200 mile between charge, 100 + epg, and 55 mpg gasoline/electric hybrids a reality, it’s more Eco-fashionable than ever to own an automobile. And that’s groovy, but do most people need or want a car in today’s economy?

The U.S. may be the only nation on the planet largely oblivious to the benefits of kinetic-driven transportation. As a society, we love our cars and have lived at the forefront of an internal combustion driven personal transportation revolution for well over 100 years. And, although many of us live in communities that embrace, “Bicycle culture,” more than not, many will look to the full-time bicycle rider in the U.S. with pity, sometimes bordering on not so quiet irritation and (sometimes)disdain.

Yo dude! Did you lose your driver’s licence to drunk driving?

Yet, as reported by Coexist.Com, Portland, Oregon based Digital Trends, Citylab.Com and others, the young, mostly 18 to early 30 somethings have abandoned the historically accepted right of passage known as the driver’s licence. Instead, they opt to forgo the ongoing expense of car and light truck ownership opting for public transportation and peddle mode-portation to pretty much anywhere within the urbane confines of Metro U.S.A..

While the reasons given by young adults for foregoing or delaying car ownership may vary, # 1 on the list is financial concern and prioritization of life’s wants and needs over that of car ownership.

Granted, as we age, relationships evolve, and the next generation comes into the picture, the personal transportation picture for many changes with the ebb and flow of job demand, task driven parenting and the occasional desire to get out and explore a bit past the outer boundaries of town or city.

Yet, with every major and some minor cities expanding light rail and railess X-Bus public transportation, with many offering bicycle transportation, the waning trend of vehicle ownership will continue into the next broadly accepted(affordable) personal transportation mode.

The average annual cost of new car ownership in the U.S, exceeds $6,000 before fuel costs

That’s a lot of money for a young worker with or without a family to support. Granted, it is estimated that 17 million new cars will be sold in the U.S. for 2015. But with a population exceeding 319 million, and the average age of a car driving the road today exceeding 10 years, that number of new car sales is but a bump on the road, which leads us back to the subject at hand.

Call me crazy, but I predict that within the next decade, bicycle sales, specifically “peddle aided” electric bicycles will continue to uptrend. offering extended range (30+miles) people-power only option, family fun, and greater cargo capacity than most can imagine, 2 and 3 wheeled pedal powered, electric motor assisted personal transportation will continue to gain popularity in the city while expanding into urbane and near-in rural communities.

We’ve seen every imaginable, rider, passenger, pet and light trailer combination on the roads of Eugene, Oregon. Not as Hippy as you think. While automotive manufacturers work to evolve battery technology to the next level of between charge range and sustainability, and answer as to zero-emissions personal transportation already exists, and has for 3 hundred years or so.

And then there's the health benefit of of aerobic exercise and fun factor. From an affordability viewpoint, one may purchase a high end, well built bicycle for under $600; or go electric for under $2500. Is this an ego-deflating step back into the dark ages for a car or truck owner? I don’t think so. But then again, I do own a car or two.