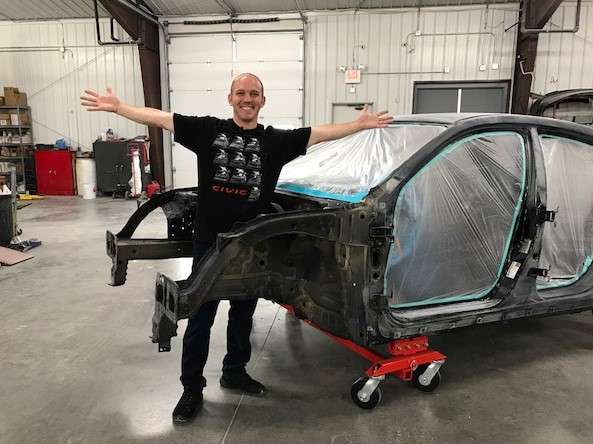 Torque News takes a first look at HondaPro Jason's epic Civic Type-R factory specification color change. There's a heck of a lot too it. But then again, there's only one HondaPro Jason. What's it take to do it right? Read on.
Advertisement

The hardest working Honda brand advocate on planet Earth is arguably Jason Richmond, A.K.A. HondaPro Jason. I’ve had the privilege of joining Jason on several Honda media reveals; we have fun, and learn much along the way. Jason’s been in the Honda game for the better part of two decades. He’s an everything Honda knowledge base for journalists and consumers alike.

Yet, like most diehard Honda gear-heads, Jason’s ultimate new production Honda performance car is the epic Civic Type-R. Jason's made a sacrifice or two towards the purchase of the first-run 10th generation platform Civic Type-R, including the sale of his iconic 9th generation Civic Si “Project Orange.” And now, Jason wishes to put his personal stamp on Civic Type-R.

Phase one of any factory specification paint color change is the disassembly of the car. Sure, you can vinyl wrap the car, but for Jason, that's not good enough. What does it take to change the first run 2017 Civic Type-R paint color to an historically correct Phoenix Yellow?

While the above statement may be a bit of a stretch. Jason has traveled the world as Honda's brand diplomat. In doing such, Jason’s attended some of the coolest Honda tuner drive-in events in Asia, Britain, the Netherlands, the U.S., and beyond. Several of the cars encountered along the way in Jason’s words are “amazing!” Such is the case of several small body Acura Type-R’s.The rarest of the rare are painted Phoenix Yellow; a color not offered from the factory on the current Civic Type-R color pallet; Jason wants it!

You and I would most likely forgo the added expense and down time required by a full disassembly, factory-specification repaint. Why not go vinyl wrap Jason? In a recent conversation with HondaPro Jason, he shares with Torque News that to achieve an authentic one-off, factory specification color change, his 2017 Civic Type-R must be disassembled down to the safety cage. Jason’s left the dash assembly and wiring harness in place, that’s about it. There’s no Vinyl wrap option for Jason.

What’s it cost? Jason’s not saying. But based on my experience in custom auto body and paint, I’m guessing close to $20K, if not more. But then again, Jason’s Civic Type-R is one of a kind.

Watch below as HondaPro Jason explains the ins-and-outs of his 2017 Civic Type-R factory specification color change. We’ll keep you posted as the paint goes on. Share this article with your friends. They’ll get a kick out of it.

Video and photo attributions go to Jason Richmond, A.K.A. HondaPro Jason 2018. Thank you.