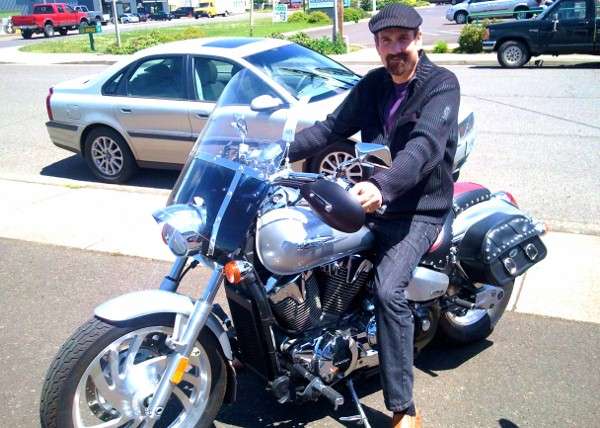 It was a tough decision for the lifetime Harley Davidson rider to exchange his keys for a low mileage Honda VTX 1300 T. Indecision was replaced by mild admiration as he mounted Honda’s V Twin Extreme. Had he lost his mind?
Advertisement

When the lines are blurred between allegiance to a brand and the sense and sensibility that comes with age, strange things happen. Writing about Honda Motors from a journalistic viewpoint, while a bit challenging at times, is often exciting and ever changing.

Very few companies on planet Earth are as product diverse as Honda. Automotive, aviation, power equipment and power-sports brush the surface of what Honda is, with a future-forward company philosophy supported by the worlds-largest engine and motorcycle manufacturer.

Honda is the # 1 scooter and motorcycle manufacturer in the world. And that’s where the 2008 Shadow VTX 1300 T comes into the picture. Raymond Max hadn’t owned a Honda motorcycle of this proportion since the 1984 CB 900 C he had ridden in his early 30s.

The biggest shaft driven Honda Cruiser of that day featured an air cooled inline 4 cylinder with the industries only 5 x 2 manual transmission with overdrive.

While a decent ride, Ray, like many enthusiasts of the 1980s and 90s pined for a Harley Davidson and after 2 years, would trade the big Honda 4 for a slightly used Harley Davidson Shovelhead FXR.

“No, it wasn’t that the Harley was a better motorcycle, but it was a Harley Davidson, and I’d wanted one since a kid,” said Ray. As he stroked the red leather seat of the Honda VTX, Ray took on the slightly shy mannerisms of a man caught cheating on his wife.

He shared with us that several Harley Davidsons with a sprinkling of a Honda or two over the years had come and gone. Two minor accidents and a blown left knee had compelled the Harley man to hang up the keys and sell his last Harley Davidson FLHTC full dresser in 2012. Ray was now looking for a lighter motorcycle.

He confided in Torque News that it was time to climb back in the saddle and that Honda would provide the most ride for the dollar spent. After riding for 44 years and logging over 500,000 miles on a two wheeler, reality had set in as to the sometimes subtle difference between ‘ want and need.’

While he still wanted a new Harley Davidson, he didn't need one. Ray simply wanted to ride...

“The big Honda twin would fit the bill for summer and early fall riding through Western Oregon, and with an asking price of $6500, wouldn’t bust the bank doing so,” said Ray, as he adjusted the driver side rearview mirror.

The Honda 2008 VTX is a water cooled 52 degree 6 valve SOHC V Twin. The engine in this case is normally aspirated via a heated carburetor for cold- weather starting. With a displacement of 1312cc, the VTX displacement is comparable to that of a Harley Davidson Evolution 80 inch V Twin. But that’s where the similarity ends.

Claiming 60 horsepower and 77 ft-lb torque at a very usable 3,000 rpm, the big Honda cruiser, while not being a dragster, provides more than ample power to the rear wheel through a 6 speed manual gearbox and final shaft drive. Usable torque is the driving force behind the success of this metric cruiser.

While the VTX isn’t the biggest twin on the block, pulling off of the light, there is no lack of usable power or noticeable torque lag working through the gears.

The brakes are great and fade-free. At 60 mph, the rear view mirrors are clear of vibration, thanks to Honda’s dual counterbalanced crankshaft.

The balance of the bike is duly knoted as one sweeps through an S curve or two. With adjustable swingarm, shock settings and the lack of running boards, the VTX swoops well without starting spark set grass fires.

This bike was designed for the long ride and with 4.8 gallons in the gas can, one can cover 200 miles before refueling.

While one won’t hear the thump of a Harley Davidson 45 degree V Twin, Honda engineering has done an admirable job of producing a deep and pleasing exhaust tone from the VTX, without blowing the doors off of the car behind you.

The fit and finish of the VTX is all Honda. Weighing in at 748 lbs (wet) and fitted with windshield saddlebags and custom saddle, this Honda is a serious metric cruiser of the heavyweight class.

However, the low frame and subsequent seating position, a frame-forward shift and rear brake ( front set) lever will accommodate a tall or short rider while providing a comfortable, controlled ride.

This bike will handle two riders and the gear required for an extended weekend ride without compromise.

Looking to the world wide web, we find Honda VTX 1300s available in various trims, (there are 3) years, mileage and condition.

Ray’s bike is a beauty. Showing only 2,000 miles on the odometer, with many aftermarket and factory upgrades, His VTX was reasonably priced at $6500. Ray tells us that he’ll ride it for a couple of years and get most of his money back at time of resale.

This Honda, like the Goldwing, Civic and other iconic Honda brands has held well over 50% of its original retail sales price, while retaining its fit, finish and reliability.

Our thanks to Ray Max of Eugene, Or. for speaking with Torque News - Honda. Keep the sunny side up and the tire side down. Ride safe old friend.

Marc Ritchie wrote on May 30, 2014 - 8:01pm Permalink
If I'm not mistaken, the bike shown is a VTX1300C and has a 5 speed. The T (tourer) model has larger fenders and different wheels. Either way, they're great bikes. I just passed 85K on mine.
Parks McCants wrote on June 1, 2014 - 12:01pm Permalink
Thank you Mark. Could be... 80,000 trouble free miles. That's the real story here. Tires, oil and filters? That's what makes Honda a great value.
Dan B wrote on February 14, 2015 - 12:45am Permalink
I purchased a used 2006 Honda VTX 1300S for $5,200. with 4.8K July of '14 This bike is outstanding in terms of fit, finish, and enjoyability. A Harley equivalent would cost north of 10-15K. I enjoy my VTX just as much as the Harley for less than half the price. Excellent story, thanks for sharing. Dan
Parks McCants wrote on February 15, 2015 - 12:40pm Permalink
Welcome Dan. Reads like you purchased on hell of a deal! These bikes are mechanically bulletproof and powerful. No flies on Harley. However, a (small) wake-up call for me decades ago was when I removed a tail light lens cover from my then 1984 H.D. FLX and read " Made in Japan" on the tail light assembly. enjoy your VTX 1300, take care and thanks for reading.
Kevin Marshall wrote on May 7, 2015 - 1:45am Permalink
I now own a 2008 Pearl White Honda VTX1300R it had 7300 original kms on the odometer paid only $7000. as is. I used to own a 2003 Candy Bright Red 750 Honda Shadow Ace American Classic Edition Deluxe Cruiser Motorcycle it gave me 7 trouble free years( it runs better than I do). But the time came to step up to a larger newer motorcycle. My original choice was a 2014 Honda CB1100A Standard Motorcycle with low kms at low price,,,not possible!!! Got lucky with the VTX 1300R instead. I sold my 2003 750 Honda Shadow Ace for $3200 certified to my niece ( 1st time female rider in family) she really enjoys the 750 Honda. I enjoy my Honda VTX 1300R quite a difference in weight,horsepower,torque, accelleration, & speed compared to the 750 Honda. But one thing remains the same dependable reliability, workhorse tough, durable, & built to last a long time. Honda is the toughest name on 2 wheels bar none!!!
Parks McCants wrote on May 7, 2015 - 12:09pm Permalink
Welcome Kevin. The Honda VTX is a monster. Enjoy riding it and thanks for your comment. Wishing you safe and trouble-free cruising.
kendawg wrote on June 2, 2015 - 5:20am Permalink
new here: while having 2000 valkyrie still find my self jumping on 2007 1300R lots of mods if any one experience front end wobble nothing but neck bearing change out
Parks McCants wrote on June 2, 2015 - 11:09am Permalink
Thanks kendawg. We appreciate the tip! Take care...
Terry Whitaker wrote on June 26, 2015 - 11:56pm Permalink
I just purchased an 04 VTX 1300c in near perfect condition with Mustang & Cobra upgrades as well as others for $3800 and 25K on the odometer. I been wanting a Streetglide but can't afford one. I love this VTX and for the price..well I will have it a LONG time.