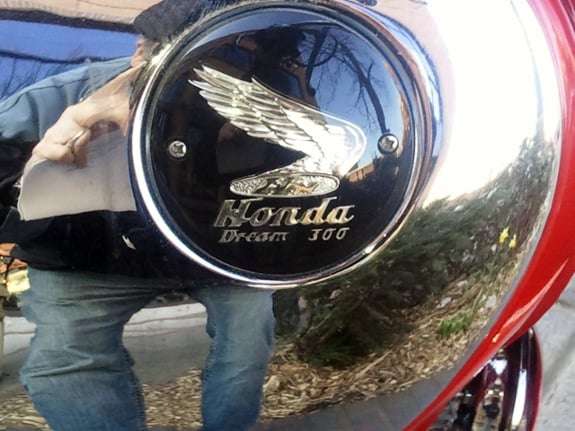 You can’t believe it when you actually see one in person. This tiny, oddly shaped Honda incarnation of the affordable “American Motorcycle” nearly put Harley Davidson and Triumph out of business in the 1960s and 1970s.
Advertisement

They seemed so much bigger when we were kids growing up in Anytown U.S.A.. Honda Motor Company of Japan had landed on U.S. shores, Los Angeles Ca.1959 and was largely ignored by the competition.

As Honda’s initial sales force of 5, entered an unknown market with nothing more than the iconic Honda 50 Cub and a line of affordable portable gasoline powered generators, American motorcycle icons Harley Davidson, Indian, Triumph and B.S.A. had no idea what impact this motorcycle manufacturer from Japan would have on the future of American motorsports and automotives.

The first thing one recognizes when walking up on a 50 + year old Honda C77 Dream, is how cutting edge the design was for mid century America. The Hogs and Triumphs of the day were utilitarian and kick started. The Honda? Molded, chromed and came with an electric starter and turn signals.

The motorcycle’s design lines actually hold up well today. Although no larger in dimension than most modern scooters, the sweeping line of the frame, molded drop tail fender and chromed tank guard has the same appeal as an Arness customized Metric or domestic cruzer.

You just want to get on your knees and study every aspect of the wonder that changed the world of 2 wheel and eventually 4 wheel transportation.

What the 250cc and 305cc Honda Dream offered and the competition couldn't touch was affordable reliability.

While the dream produced a mere 28.5 hp at an unheard of red-line of 9,000 rpm, it did so without leaking oil, blowing electrical fuses and requiring an inordinate amount of mechanical tinkering and maintenance. This was the appeal of the Dream for both Rider and passenger.

The 2 cylinder 4 stroke overhead cam engine didn’t shake the operator to numbness while leaking oil on his girlfriend's leg.

It was civilized and trouble free to ride. The Dream was fully capable of attaining speeds of 100 mph and had front and rear wheel mechanical drum brakes large enough to effectively stop the bike. Something that Harley and Triumph didn’t do very well in the day.

Honda produced the 165, 250 and 300 Honda Dream for 10 years before evolving into the mother of all Enduro Motorcycles, the 305 Honda Scrambler.

The company had expanded its product line to include motorcycles from the 50cc Cub to the 300 Dream.

By 1961 Honda was selling more than 1000 motorcycles per month in the U.S.A.. At that time the largest motorcycle manufacturer in Japan, Honda would soon grow to a major presence in the U.S. on the wings of an advertising campaign slogan, “ you meet the nicest people on a Honda.”

The introduction of the 1972 Honda Civic to U.S. markets, would transform the world’s largest motorcycle manufacturer into a viable automotive presence in North America. As they say, “ the rest is history”.

As we walked away from the fully restored Honda 300 Dream, I was reminded of a 9 year old boy pushing a salt air rusted Dream down the streets of a small coastal town. It was heavy and unyielding. Tires flattened by time, the smell of stale gasoline smacked his nose as he twisted the cap off the chrome tank. Never to run, but none the less a memorable experience for this journalist.

Parks McCants wrote on March 28, 2014 - 12:43pm Permalink
Small motorcycle BIG story.One man's "Dream" and calculated $ gamble paid off in the U.S. and propelled Honda to world dominance in motorcycle and small engine manufacturing. Honda cars? The icing on the corporate cake.
Fred wrote on April 13, 2014 - 8:50am Permalink
Hard to believe they lost a copy right battle with GWRRA over use of the Elsinore wing that is part of their logo.
Parks McCants wrote on April 14, 2014 - 12:12am Permalink
Looking to the Rolls Royce and Packard of old, it doesn't surprise me. None the less, the logo viewed above, will always represent Honda to me. Thanks for dropping in Fred. Hope to read you again.
Metoo wrote on June 16, 2016 - 10:04pm Permalink
My first bike was a Honda 50, my second a Honda 300 dream. Rode both till they fell apart and that took years. Honda beat Harley in the marketplace because Harley (just like Detroit auto makers) were making crap and thought we would keep on buying it out of loyalty. LOL. If you want to know how to tell crappy products........just look for the union label.
tee wrote on September 16, 2016 - 1:24pm Permalink
My first bike was a White 305 Dream; So I ask you, what is today's equivalent model?
Parks McCants wrote on September 16, 2016 - 2:26pm Permalink
Welcome Tee. Good question. The day of the 300 CC cruiser is long gone. However, for a fun daily rider at a reasonable cost, you may wish to look at the http://powersports.honda.com/2016/rebel.aspx Cheers.
Tee wrote on September 16, 2016 - 3:16pm Permalink
Waaaaay past the Rebel.....last long time friend was a BMW R1100RS that gave me 65k miles before someone else wanted it more than I did. I'm aged now and fondly remembering tooling along the back roads on the Dream in the 1960's....was more fun @ 60 mph( in my recollection at least) than cruising the [email protected] 90mph and hustling the curves. Time to slow down again and catch the scenery. There has to be a middle ground; rode with Hd guys in the day between the Honda and the Beemer,,(there were 3 Sportsters...my dad was a fan of flat track so he brought the muse)-the XLCHs were the first super-bikes before the soon-to-arrive era of Honda fours and the Mach and Z series of the Kawasaki world., but HD gave up on advancing their engineering for style and I no longer need 100 HP to prove anything to myself. An acquaintance has suggested to load up a Ural ( now that they've become a bit more reliable)and roll across the country on the backroads now that business no longer calls on a daily basis...but those CA77 qualities: reliable, affordable, comfortable and really quite capable (a bit too small by todays standards and my height) are still whispering in my ear....It had some style....wasn't trying to be a race bike or some copy of a cruiser- Soichiro could have copied the Panhead or the Indian Chief or Scout....and it had enough weight to be as stable as 1964 engineering could imaging for the mass market. Be well
Parks McCants wrote on September 16, 2016 - 7:17pm Permalink
Welcome back T. Well, the Ural would be fun, but is more or less restricted to below 60 mph cruising, at least in the base form. So, for you, a guy that wishes to catch some wind in relative comfort, while not man-handling 8 or 9 hundred pounds, I'd be looking to a duel sport for my motorcycle fix. Several come to mind. Honda's CB 500 X is a great example of a go-anywhere, light and reasonably affordable midsize adventure bike. If you wish to kick it up a notch, BMW offers a 600 series, and Triumph fields the top rated lineup in the segment. Here's a used example or two.http://motorcycles.oodle.com/triumph/for-sale/dual-sport-motorcycles/ I too am a 5 decade rider, and have owned too many brands to list here. I sold my last Harley Davidson FLHTC Electra Glide a couple of years back, and have yet to replace it. Like you, I'm looking for that perfect, reliable, every day ride with some long-distance leg capability, yet light and easily handled on the 2-lane country sweeps. It just depends on how far back to basic you wish to go. * Have you seen the new Ducatti 803 Scrambler? Now that's an interesting ride. Happy hunting!
Paul Dale wrote on December 6, 2019 - 8:58pm Permalink
I owned a 150 Dream when I was in the Navy in Hawaii in the mid-60's. She had been passed down several times as owner's were transferred or ended their enlistment. She had quite a few miles on her when I bought her and I added many more. I met a pretty redhead on Waikiki Beach and our first date was a ride around the island. That was 55 years ago. I hope she will let me buy another one for old time's sake.
Brian Sobey wrote on June 21, 2020 - 9:06pm Permalink
I rode my 67 dream today then went home and rode my Hayabusa guess which one got more looks!!