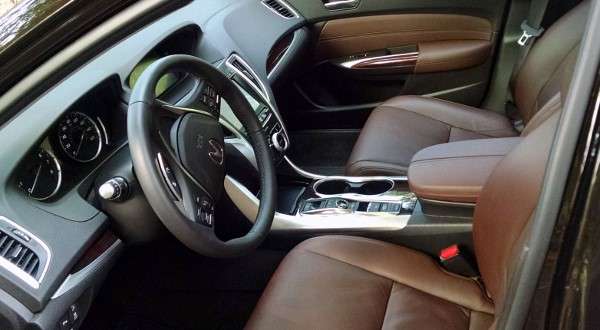 Wednesday’s Bloomberg.Com report exaggerated the scope of a pending 2015 Acura TLX brake recall, Torque News looks to the truth of the matter.
Advertisement

In a move to grab a bit of sensationalism-driven readership, Bloomberg.Com reported Wednesday in the wake of the latest Takata airbag recall action, a pending parking brake related recall for Acura’s best selling 2015 TLX V6-9. While the essence of the article reads true, the headline exaggerates the conditions and scope of the pending recall, stating that 'Acura TLX sales in the U.S. halted;' not entirely true.

We've driven TLX and were more than a bit impressed by the technology and performance value represented by Acura’s latest premium sport sedan. looking to the Bloomberg piece we find an over emphasis on Honda’s ongoing Japanese built Fit and now worldwide Takata airbag related recall action.

Yes, Honda has(perhaps) adopted an over cautionary stance in the wake of Takata and Fit related defects as to pulling the trigger on near future “precautionary, voluntary” product recalls; and there may lie the problem.

According to our trusted source at Acura: Yes, dealers were notified December 4 to stop selling certain Vin # 2015 Acura TLX V6 9 speeds. However, the statement from Acura is explicit as to the facts of the matter, and they are:

On Dec. 4, 2014, Acura notified its U.S. dealers to stop the sale of certain TLX V6
vehicles until they receive specific inspection and repair instructions from Acura.
Only certain vehicles are included in this action, and nearly all new TLX V6 vehicles
being delivered to dealers currently are unaffected by this stop sale order.

Acura will provide further information to its dealers and clients as it becomes
available in the near future. In the interim, Acura encourages all drivers to engage
the parking brake whenever parking their vehicles.

As of November 15,293, 2015 Acura TLX in all variants have been sold. We've received customer satisfaction reports bordering on giddy from our readers.* I do recall an initial vehicle weight mislabeling affecting fewer than 300 cars. Perhaps that will be the extent of the latest recall. In the meantime Acura strongly suggests that all 2015 Acura TLX V6 owners set the parking brake when leaving the car in stationary position.

The parking brake is activated by a secondary toggle. * You can feel the parking brake engage and disengage. However, reading between the lines of the dealership notification, the setting of the parking brake is not automatic when the TLX 9 speed is positioned in “Park.” I also recall buttoning the 9 speed into reverse at speed while driving in the dark. Thankfully, TLX is smarter than I am and did not engage in reverse mode while moving forward at 70 mph.

In closing: There’s a short learning curve to Acura’s push-button driving mode and transmission setting button interface. If you've had a problem with your TLX, we'd like to read your comment here.

paul zorrilla wrote on January 8, 2015 - 9:36am Permalink
my 2015 tlx rolled into my neighbors driveway with 1800 miles on it the Acura Dealership confirmed it rolled in park than replaced the transmission, my Tlx also stales while driving which is unsafe to drive!! Nothing but major problems with my 2015 Tlx!!!!
Parks McCants wrote on January 8, 2015 - 7:21pm Permalink
Welcome Paul. Sorry to read this. Are both malfunctions related to the transmission. Has the at-speed stall problem been remedied by the replacement transmission. And, when did you purchase your TLX? wishing you better days.
Paul Zorrilla wrote on January 9, 2015 - 6:27am Permalink
No both malfunctions are not related to the transmission, my vehicle is currently at the dealership to take car of the stalling.. Still stalls after the transmission was replaced! I also have a 4 cylinder 2015 tlx which is also at the dealership for a erratic transmission shifting problem.. I don't kno what's going on with these vehicles.. Worst start to having a brand new vehicle.. And Iv owned Acuras for many years and no problems..
Paul Zorrilla wrote on January 9, 2015 - 6:34am Permalink
I purchased my 2015 tlx in October 2014 , I purchased 2 of them 1 four cylinder with technology package, 1 six cylinder with technology package.. Both have had major issues since I've had them.. They been getting service half the time I've ow them .. I've been in loaner cars .. Acura has to do something about this!!!
Parks McCants wrote on January 9, 2015 - 12:30pm Permalink
Good morning Paul. I'll pass your comment on to Acura. You're the first we've read of shifting problems with the i-4. Very frustrating!
Parks McCants wrote on January 9, 2015 - 4:32pm Permalink
In speaking with Acura: Dealer service departments to date have not reported a measurable number of stall or shift related problems for the TLX i-4(yet). Please keep us up to date as to the car's performance after correction. Thanks.
Georg wrote on January 24, 2015 - 10:46am Permalink
We are also experience erratic shifting, stalls on our 2015 tax I-4. Dealer had it for 5 days and said no problem found. Shame is everything else is so nice on the TLX. I hope an answer is found soon.
Dave Dozzi wrote on February 3, 2015 - 7:51pm Permalink
I've been leasing my TLXi-4 since October 17, 2014. Some weeks after I got the car I noticed a quite noticeable delayed reaction "clunking" as I was coming to a stop. It was so obvious that I Initially thought that someone had tapped my rear bumper. This has occurred rather sporadically and has thus lead me to hold off on taking the car in to the dealership. I'm assuming it will get worse, happen more frequently & be more readily diagnosed. I've also noticed, especially when the car has yet to warm up,that there is some slipping as the transmission shifts into gear. I've contacted both the dealer as well as Acura and each has said that no one else has complained about these issues. Anyone out there with similar problems?
Jimmy wrote on March 12, 2015 - 9:03am Permalink
Test drove a v6 Tlx yesterday and was quite dissapointed with the shifting quality, especially, in stop-and-go traffic...extremely jerky tranny which is very unacceptable of a car in this class. Ironically, the Honda Accord is world smoother and rides alot better
Parks McCants wrote on March 26, 2015 - 11:27am Permalink
Good morning Jimmy. Put a spin on "jerky" for us. Are you refereeing to the gear-changing, paddle shifting, or? Thanks.
barbara kellerman wrote on March 26, 2015 - 8:30am Permalink
Bought TLXAWD in February. Have had stop/stall problem since the beginning. I consider the problem dangerous and will refuse to keep the car in its current condition.
Parks McCants wrote on March 26, 2015 - 11:25am Permalink
Good morning Barbara. Please expand a bit on your comment. I'm assuming that your TLX is equipped with the auto-stop, start feature for fuel savings, and, has a feature disable button. When does your car stall? Thank you.
S.A. McDaniel wrote on April 8, 2015 - 9:00pm Permalink
I bought an Acura TLX Advance on 04/06/2015. It has 165 miles on it and already is in the shop. Every safety feature flashed on the dashboard stating their was a problem. I took pictures of multiple screens. The most concerning was the brake system. Anytime I tried to accelerate the car was constantly applying the brake. It was felt most dramatically when I was going above 40 mph. I am seriously hating Acura after owning a TL for 7 years.
Joe wrote on April 14, 2019 - 12:04am Permalink
I am purchasing a used 2015 TLX V6 SH-AWD with Tech. The VIN is 19UUB3F54FA802426. Are there any open recalls on this specific vehicle, for either the trans or braking system or other issues? By the way, the vehicle is a Canadian vehicle. Thanks
Feroze Khan wrote on March 5, 2020 - 7:12pm Permalink
Just got home from work, first day after my local Acura dealership (Acura Pickering) gave the car back. The car was with them for about a week, and now the (P) parking button is getting stuck. I read online about this, not too sure if this has anything to do with the recalls. I checked my VIN online on Acura Canada's website. I have the V6 9 speed, and there's no outstanding recalls. To say I am dissatisfied is an understatement. I've had nothing but problems with this car since I bought it 3 months ago.

Elon Makes a Cybertruck Statement With an Action, But Quiet in Words
Tesla's Record Month in China: Doubled Registrations in March 2021
END_OF_DOCUMENT_TOKEN_TO_BE_REPLACED