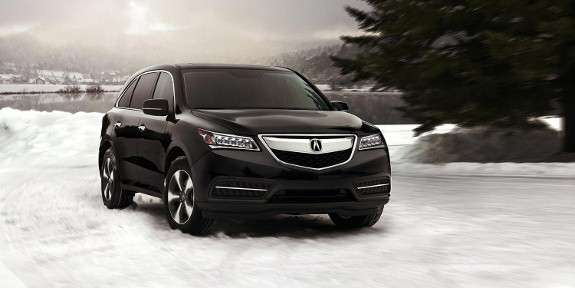 As consumer and automotive journalism accolades pile high in the hallowed halls of American Honda Motors, Torque News-Honda takes a closer look at the soon to be most award winning luxury SUV in North America; the 2014 Acura MDX.
Advertisement

53,040 Acura MDX SUVs were sold in North America for model year 2013. This was a record year for Acura motor division’s most expensive SUV and least fuel efficient vehicle.
But, in the world of Luxury crossovers and SUVs, fuel efficiency and msrp is often left on the side of the road in favor of panache and human comfort accouterments.

In the case of the Acura MDX, you can have it all. Relative affordability, luxury accommodations, reasonable performance and the best overall fuel economy in its class.

The SUV segment was the fastest growing in 2013’s recovering economy. Honda’s Acura line came out the winner with the MDX and the RDX breaking production sales records while being recognized by Kiplinger’s Report and U.S. News and World report as “2014 Best Value in a full-size luxury SUV and “ Best car for the money.”

We at Torque News find it interesting that Acura’s best selling car is a full sized SUV. Honda, a company known for fuel efficiency, environmentally friendly and low impact vehicles, has apparently cornered the market on small, midsize and full-size SUVs. Honda’s CR-V is currently battling with Ford Explorer for the #1 spot in the midsize class with the Honda Pilot, Acura RDX and MDX recording record sales.

We believe this shift in the market to be a reflection of public fuel efficiency consciousness, price-point consideration and recognition of “Best” in quality and performance standards for the class.

The European, Japan and Korean makers have doubled the fuel efficiency of mid and full size SUVs without sacrificing utility and accommodation. Acura takes the trend to new heights by provided unprecedented automotive technology, fuel economy and performance in a full size SUV at an attainable price point.

Today while a Tahoe or two do run the roads of middle America, the new economy has shifted sights and landed on a new definition of “full size” as demonstrated by the Acura MDX.

In 2014 we find a new breed of Audi, BMW and Porsche inspired sports-handling “smart” and all-wheel sports-tuned SUVs that have elevated the automotive utility transformer to new heights.

The noted and much awarded value found in the Acura MDX was spawned by evolutionary automotive engineering, world class electronic technology, and fine tuned through HRD and Acura’s race development programs.

In the MDX we find an exceptionally well engineered, highly computerized mobile platform. From the wind-tunnel dictated smooth body contour to the VCM engine controller and arguably the finest “smart” all-wheel drive system on the planet, Honda advanced technology has created the most fuel efficient and road-worthy 7 passenger SUV on the market today.

Looking to the specifications we find a marvel of computerized wizardry present in every aspect of the MDX. From the seamless VCM cylinder management to the constantly monitored traction actuated all-wheel drive, this aerodynamically influenced wind tunnel tested statement to graduated scale fiscal responsibility paves the way for a smarter generation of Acura SUVs and crossovers.

For those of us that owned SUVs of the past decade, 27 mpg highway was unheard off. We were lucky to see 18 mpg and when pulling a trailer, 12 mpg.

The 2014 Acura MDX proudly displays an EPA average mpg of 18/27/21. Granted, not Accord Hybrid fuel efficiency, but outstanding by SUV measurements.

For those interested in reading MDX specifications you can find them here.

In closing, while driving the MDX we were impressed by the relative absence of road noise, high tech navigational and personal communications interface. While the adjustable electronically controlled “ride and feel” setting proved amusing, the overall ride and seat stiffness prevailed as we transitioned from pavement to gravel road.

Acura has done a very commendable job in engine and drive train management; while preserving the torque and revline required when traversing down a dirt or gravel road.

Although rated at a mere 290 hp, the variably timed and cylinder controlled 3.5 Liter 24 valve SOHC 1-VTEC proves to be formidable in a 275 lb lighter and 16% more aerodynamically efficient MDX. The Acura SUVs are the most popular in the line for the simple reason that they deliver the greatest utility while remaining exciting to drive.
Fast, fun and very civilized.