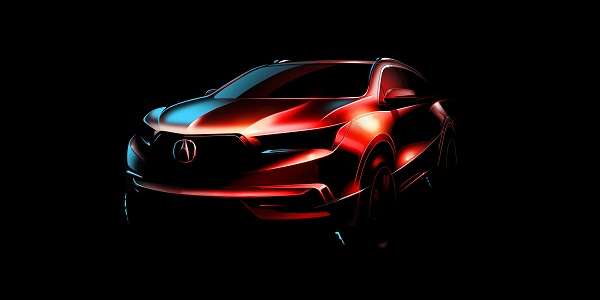 Honda’s Acura Division announced Wednesday morning the coming of the most advanced SUV in Honda history. It looks like “Precision Performance” has caught up with MDX. We’ll first see 2017 MDX in New York.
Advertisement

The best selling premium SUV in North America just happens to wear the Acura brand. If you’ve driven one, you know how good it is. But as all things must change, so must MDX. For some discerning buyers, the historic MDX body line remains just a bit too chunky, too reserved -- with no “flash” for your cash.

looking to Acura’s latest MDX concept drawing, that’s all about to change. Gone is the pronounced beak and bull-dog nose -- replaced by a less pronounced grill design, flowing aggressive body line, with just a hint of NSX bodyline injected for dramatic flair, the concept drawing captivates the imagination as to MDX things to come.

As first presented in Acura’s stunning Precision Concept Sedan, 2017 Acura MDX will carry the “Precision Performance” body language into the premium crossover, SUV lineup. Looking to the illustration above, if a picture says a thousand words, then if nothing else, 2017 Acura MDX should and will be sensory stunning!

With 50,000 + units currently sold per year in North America, MDX is Acura’s light truck flagship in a very competitive and still growing segment. Reading between the lines of Acura’s Wednesday news bulletin, we note a promise of a new design, greater comfort, convenience features and “ Advanced New Powertrain Technology.” Could Acura be talking multiple motor, hybrid technology for 2017 MDX?

In the words of Mr. John Mendel: “We are sharpening our focus on the Precision Crafted Performance DNA of the Acura brand and the 2017 MDX will integrate new styling elements and powertrain technology that takes us another step in that direction,” said John Mendel, executive vice president of American Honda Motor Co., Inc.

Look for Acura’s world debut of the totally re engineered 2017 Acura MDX from the revolving stage of the New York International Auto Show March 23, 2017.

Toyota's First EV Will Have a Name of BZ: Toyota BZ
First Videos From Inside The Boring Company's Las Vegas Loop
END_OF_DOCUMENT_TOKEN_TO_BE_REPLACED