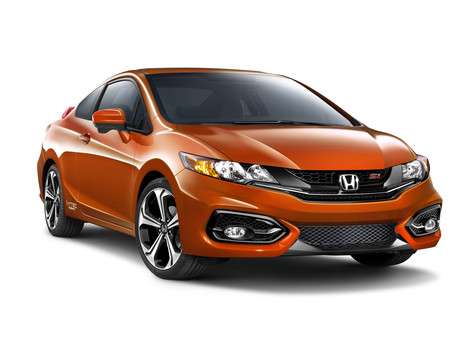 The Darth Vader-esque nose design of the 2014 Civic Si has received a very mixed review from the Honda loyal. With the recent exit of the Insight and pending demise of the CR-Z, we believe the Si may be next to exit the line.
Advertisement

Would-be buyers cry foul despite an increase in power and a plethora of standard high tech features and upgrades. The 2014 Honda Civic Si will be released March,12 to North America dealerships. For the fortunate few able to locate one in dealership stock( we haven't) you’ll find a much improved Si priced at a paltry $275 over last year’s offering.

For the money you will receive the much touted 7 inch display audio featuring Honda’s exclusive LaneWatch (tm) camera, a much improved suspension, upgraded wheels and tires and 2% more power.

We believe that the Civic Si offers a lot of built-in standard featured value for the money. But will the car buying public take the hook?

Is the Honda Coupe in the death throes of an ever changing market? logic would dictate that without exceptional public response and subsequent sales, 2014 may be the last year for a Civic based 2 door coupe.

Granted, the latest generation of the Si is loaded with tech features second to none in a class generally considered entry. But, with a starting price MSRP of $22,990, the reality of today’s state of the economy leaves this author scratching his head as to Honda’s intended market.

An entry level employee making a bit above minimum wage can’t afford the payment attached to a $20,000 car purchase. Most of our young tuner friends fall into this category of buyer. Hard working, underpaid. Even at these numbers, the Honda Civic Si is targeted at a relatively affluent 20 to 30 something with an above average income.

When we look to the Honda Si, the competition in this sector is fierce, as "well to do" young progressives look for the biggest bang for the buck. Toyota, Subaru, Hyundai, and BMW have done very well in the small to midsize sport car sector, as potential buyers weigh an initial sticker price against the prospect of long-term ownership.

Price is not always the primary factor when choosing a car in this niche. Looks play a big part in the decision, and, according to our readers Honda may have sliced into the rough with a questionable front end treatment of a relatively limited production car..

As displayed by Honda at the 2014 L.A. Auto Show, the future for entry level Honda sales rests with the development of an affordable sports hatchback, as demonstrated through the 2015 “ Earth Dreams” Fit.

Cruising Facebook and a myriad of Honda Civic and Civic Si owner’s forum we find that the most common detractor stated by a young progressive readership is a common dislike for the front end design of the Coupe. Specifically, the lower bumper cowling housing the fog / parking lights. Cries of “ Starship Enterprise, Darth Vader’s helmet and what the hell is Honda Design thinking here permeates cyberspace with the stink of fan-base disdain.

They also wish for a bit more, while wanting a bit less. Let us explain.

Yesterday we were reminded by a reader that the stated horsepower and torque of the much awaited resurrection of the much perceived “ill” design 2013 rendition produced 5 more ponies, than the 2013 model. While it seemed a bit nit-picky by this author, the statement identified the problem at hand. Too little car for too much money.

True enough, by “ tuning” the Si’s exhaust, Honda has increased the hp., torque, and estimated fuel economy. But, what they haven't done is reduce the curb weight of the vehicle, offered a hatchback rendition or kicked the Si into the much wanted realm of the Civic Type-R.

We’re now wondering after a very mixed reception from the Honda loyal how successful (sales) the latest rendition of the Civic Si will be.

With the continued success of the 3 and 5 door hatch variance in the small import and domestic car markets, it remains a mystery to many as to Honda’s hesitance to release a European style hatch to the North American market.

Perhaps 2014 will mark the end of the true 2 door Accord and Civic Coupe in North America as Honda moves to a much improved 2015 Fit and Vezel sport crossover. For us the handwriting is on the exit door for the Civic Si Coupe.

While there remains a true need for a performance ( business class) Si, the day of the 2 door may be behind us as utility usurps the quirky body line and grill treatment of the last small Honda coupe standing.

jason wrote on May 20, 2014 - 6:25am Permalink
I have 2014 si and love it. I want car that is fun to drive and last.If i wanted real power i would have got a muscle car but were i live you cant get over 60 plus like i said i want a car that will last.
Parks McCants wrote on May 20, 2014 - 5:06pm Permalink
Congratulations Jason. You made a wise choice in your purchase. The Honda Si will provide years of service while retaining the highest resale value in the industry. Thanks for dropping in.
jason wrote on May 20, 2014 - 5:13pm Permalink
Yes i have had 3 si i trade my 2012 for this one this is so fare the best one i have had very conforble seats and the techs are awesome it has everything and i got the fire orange one everybody gives it the wow look lol.
JJ Dymora wrote on June 24, 2015 - 6:10pm Permalink
Just bought a 2015 SI three days ago. Mind you I still have the 1997 Accord EX 2-door coupe in the driveway that I've driven and loved for the past 8 years. I am going to go through the < 3500 RPM break-in to let the valves seat, but this car is not only very exciting to drive... it helps you. The handling is what I desire over Horsepower. The SI delivers with tight, suck down cornering, sure breaking, smooth dampening, and more. The fact that there is plenty of Horsepower for my tastes upped the ante for my car buying dollar.The strategic cameras, the intuitive vehicle interfaces, the engineering for the driver comfort and control all contribute to a driving experience that I don't see getting tired of. Call it a mid life crisis, but for this 60 year old a daily shot of adrenaline is just what I need and this car gives it to me.
Parks McCants wrote on June 25, 2015 - 1:48am Permalink
Thanks JJ. I'm right there with you. Enjoy your Si. With the pending Civic generational change, your car with care will be a classic. Money in the bank.
Sarah Holder-Coar wrote on December 2, 2015 - 2:43pm Permalink
Is this the same JJ Dymora who went to Oak Grove High School in San Jose, CA? If it is, we used to be high school friends. Unfortunately, I've lost contact with a lot of friends I used to have and if you're the same JJ, I would like to know. Please email me if this is you. I would like to keep in contact with my friends. [email protected] Thank you for your time!!

Elon Makes a Cybertruck Statement With an Action, But Quiet in Words
Tesla's Record Month in China: Doubled Registrations in March 2021
END_OF_DOCUMENT_TOKEN_TO_BE_REPLACED