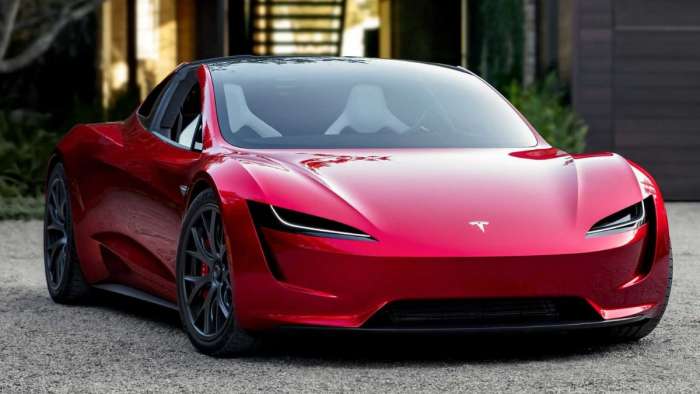 Why Solar Roof is an Excellent Idea for the Tesla Roadster

Actually, having a solar roof is an excellent idea for ANY electric vehicle (SUV, sedan, truck, Semi, etc.), as the technology basically allows to widely extend the range of the vehicles, and on the other hand, would permit to drive almost entirely by getting energy directly from the sun. Some automotive engineers believe solar power may be the solution to many other issues in that regard.
Advertisement

Several start-ups, such as Aptera Motors, Atlis Motor Vehicles, Fisker Inc., Lightyear One and Sono Motors, as well as established OEMs like Hyundai, Tesla and Toyota, are developing solar cars or hybrid versions of them. They are integrating solar cells into roofs. However, other body parts, such as doors, hoods, tailgates and trunks, are also prime real estate.

A good example is Lightyear, a solar electric vehicle pioneer, which has achieved a major technology performance milestone by driving 441 miles (710 km) of range with its Lightyear One prototype car. Never before has an electric vehicle driven such a long-range on a relatively small battery. Lex Hoefsloot, CEO and co-founder of Lightyear, said earlier this year in an interview that “...after four years of hard work and in-house development, this is a very important engineering and technological milestone. It validates the performance of our patented technology and truly shows that we are able to deliver on our promise to introduce the most efficient electric vehicle. This prototype has over 440 miles of range with an energy consumption of only 137 Wh/Mile at 53 miles an hour. Even the most efficient electric cars in the market today consume around 50% more energy at this relatively low speed.” 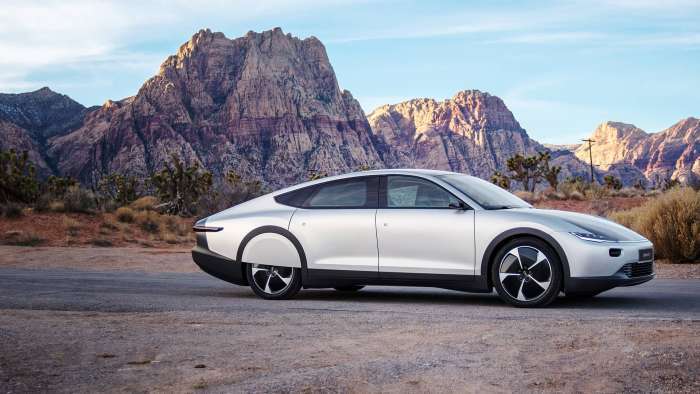 The prototype car was put to the test at the Aldenhoven Testing Center in Germany, to complete a drive cycle at a speed of 53 miles per hour on a single battery charge of 60 kWh. The integral test ranged from validating the yield of the solar panels, the battery performance, the energy consumption of the cooling system, all the way to the functioning of the in-wheel motors and the software operating the solar car.

Another interesting point of view about solar-powered cars comes from an article by Steve Tengler in Forbes, which states that “…a few manufacturers - mostly start-ups - have developed various solar-powered vehicle designs, typically with the capability of augmented fueling via plug-in electric. The minimalist goal for some of them (e.g., Hyundai, Tesla, Toyota) is to extend the range of the electric vehicle by recharging without stopping. For others such as Aptera and Lightyear One, the goal is much greater: to rarely utilize the grid and achieve most of the fueling via the solar panels.”

“As we started to do the math given more efficient solar panels and improved battery performance over the past decade, we realized we could produce almost 700 Watts with our solar body panels,” stated Chris Anthony, co-CEO of Aptera Motors. “With a hyper-efficient vehicle platform, that translates to 40 miles per day of free charge range. The average North American and European driver goes 31 and 25 miles a day respectively and, boom, there ‘ya go. It’s an equation that really makes sense for people. They can do all of their daily driving just off of solar.” 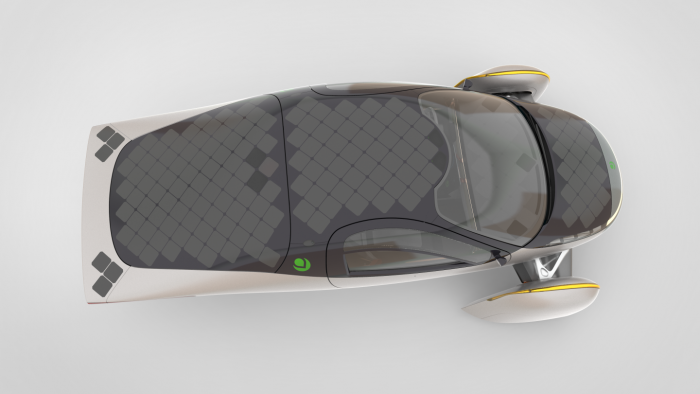 Another example is Nimbus, a car designed by the MIT Solar Electric Vehicle Team, that won its category at the 2021 American Solar Challenge (ASC), traveling 1,109 miles at an average speed of 38.4 miles per hour in a five-day race that ended August 7. In 2021, instead of being timed as usual, the race was based on distance traveled. Each team followed the same route, from Independence, Missouri, to Las Vegas, New Mexico. But teams could drive additional miles within each of the three stages—if their battery had the juice. Traveling with seven support vehicles, Nimbus beat eight other single-occupancy cars, surpassing the runner-up by over 100 miles. 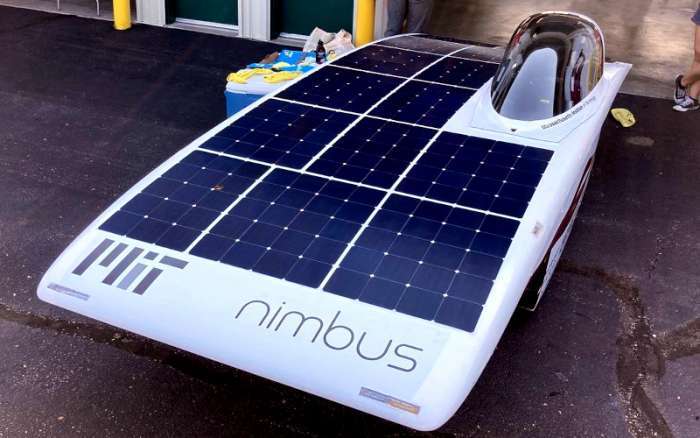 Generally speaking, the goal of vehicle-integrated photovoltaics is to enable EVs to recharge without stopping. Unlike traditional EVs that must periodically pull over to recharge batteries during a long road trip, solar cars can keep on going. Electric cars and trucks embedded with photovoltaic cells can convert energy from sunlight into electricity. Storing solar energy in batteries enables them to run smoothly at night or in the absence of direct sunlight.
The Tesla Roadster, once finally available, will be the quickest car in the world, with record-setting acceleration, range and performance: 0-60 mph in 1.9 s, a top speed above 250 mph, and 620 miles range. It is designed for performance and aero efficiency: as an all-electric supercar, the Roadster maximizes the potential of aerodynamic engineering - with record-setting performance and efficiency. It is he first supercar to set every performance record and still fit seating for four. The glass roof is an exquisite design touch: a lightweight, removable glass roof stores in the trunk for an open-air, convertible driving experience. 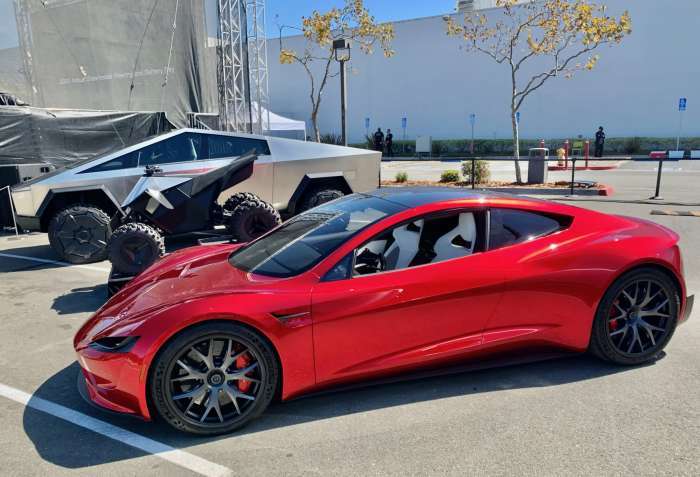 But we are obviously NOT comparing the Roadster with the Aptera, Lightyear One or Nimbus (for many different reasons, having to do mostly with parameters); we are talking about including those technologies as part of the general design. By including some of this solar technologies (and after some extra tweaks, I assume, considering the average North American and European driver goes 31 and 25 miles a day respectively), the Tesla Roadster could eventually be capable of providing enough range so as to forget about superchargers for potentially days or weeks. 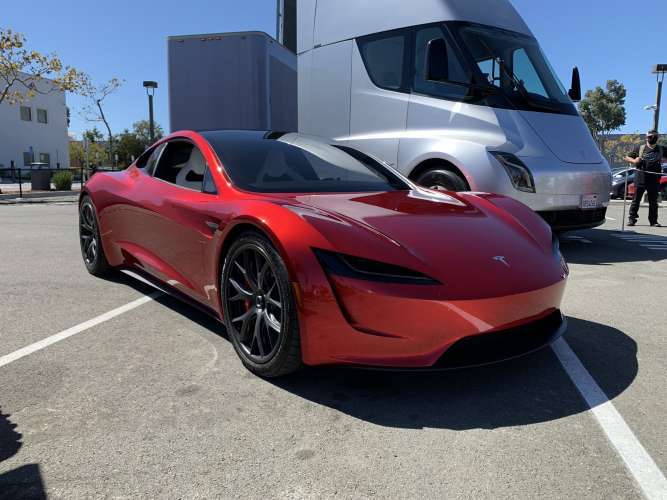 What do you think? Is solar technology a good idea for the upcoming Roadster? Please let us know in the comments below.

John Goreham wrote on November 4, 2021 - 4:05pm Permalink
I agree. The Sonata's solar roof can add a year of range over its lifetime. Toyota says the new Bz4X will do the same after it is launched. A solar roof seems so obvious for a company that is also in the green energy generation space. Odd that Tesla doesn't offer one.
Nicolas Caballero wrote on November 4, 2021 - 5:00pm Permalink
I couldn´t agree more with you, John. Odd that they don´t offer one yet...
Sam Pirrate wrote on November 7, 2021 - 8:18pm Permalink
Generally speaking a typical off the shelf solar panel exposed to 1,000 W/m2 sunlight will produce between 180 W and 230 W in peak conditions, so you will get around 400W from 2 square meters of panel at NOON. On a day in July Sun light you will be lucky to get a total of 2kw of storage. Enough to go about 10 miles in an average EV. Dream on.

Tesla Giga Berlin's New Hurdle: It's Not Only the Gov't, but Now Tesla Itself
Teslas Are Sold Out Until 2023, But The Timing May Reverse
END_OF_DOCUMENT_TOKEN_TO_BE_REPLACED