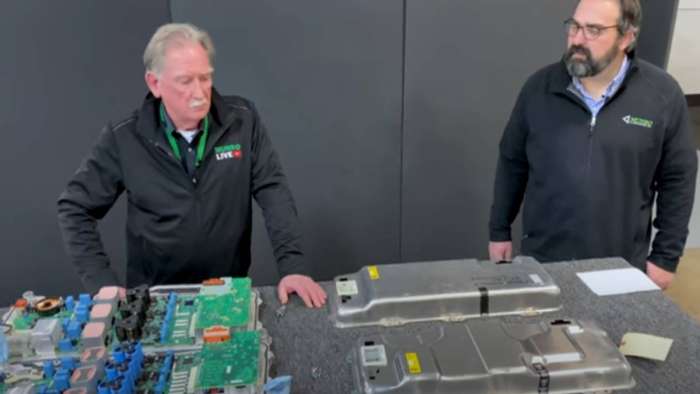 Sandy Munro and his associate started looking at a Tesla Model S Plaid battery. The first thing they saw was the Mica Shield. The Mica Shield is about a 30 pound piece of steel or metal that is on top of the battery. The Mica Shield bolts to a steel frame. The main reason for this appears to be for structural integrity and to better protect from any kind of fire. China has strict requirements, which is causing companies to put in more protection to better protect from fires. Sandy Munro doesn't like the Mica shield because Mica requires mining. He likes fire retardant plastics because it doesn't require mining.

They removed the Mica Shield, showing the structure of the lower part of the battery case. There is a welding technique patented by General Motors in 2012 called concentric welds. It's used to extend the life of the welding tips of the welding machines by about 3 times.

Tesla has also increased their welding area to give more area to their battery pack being put together. There's a bigger gap, about 25 millimeters, for the battery pack to flex and move, giving it some flexibility.

There are four different castings being used for different mounting techniques, some used to hold the battery pack together and some to reduce part counts for mounting different components.

Cooling the battery seems to be a VERY important part of having a functional battery pack.

There are also valves used to protected the wiring along the battery system. All connections run to a battery management system for the vehicle. They are also capturing the coolant from the coolant pipes. Tesla is also trying to get as much as they can out of each part. The batteries are also sectioned and if there is any issue in a section of the battery it will be contained to just that section.

There is a connector that was like the one for the Model Y that runs all along the side of the battery pack. The connection is much longer because the location of the battery input is at the front of the pack instead of the rear. The inputs are now part of the battery pack and there are now only 5 modules instead of 16 for the old Model S. The longer cable is for better efficiency.

There is an increased number of battery cells compared to the old Model S. The old S had 7,104 cells in it at 85 kW. They've gotten more efficient in less space and now have 7,920 cells at 100 kW. That's an increase of efficiency from about 83.6 cells per kW to now 79.2 cells per kW.

For further details on the amazing engineering of the Model S Plaid video, see the Munro Live video below:

What do you think about the Tesla Model S Plaid battery? Is it an engineering masterpiece like Sandy Munro says?