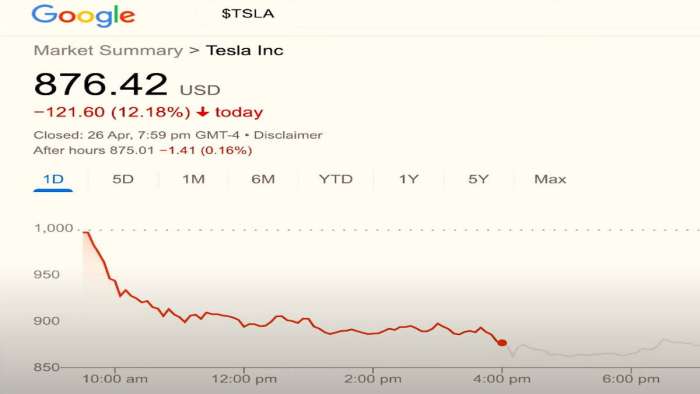 Tesla Implodes by 12% In a Single Day

Tesla and the overall global market had a difficult day yesterday. Tesla was down 12 % and had one of its worst days ever. Let's look at why this happened and why Tesla is still one of the greatest investment opportunities of all time.
Advertisement

Tesla Implodes by 12% In a Single Day

Tesla stock crashed by 12% yesterday or $121 in a single day. If you look at this before Tesla stock split, this would have been a decrease of $605. That's a lot to go down by and is over a $110 billion market cap drop.

There's two reasons why Tesla got crushed. The first reason is that there is a macro environment that is struggling right now. The second reason is that people are unsure about Elon Musk's purchase of Twitter, causing people to feel uncertain and be confused.

If Elon Musk is buying Twitter, is he going to be focusing mostly on Twitter and lose his focus on Tesla? Are investors fearing that Tesla as a company is going to do worse in production and delivery numbers and not be able to improve FSD because of Elon Musk buying Twitter?

I think these are fine questions to ask, but I don't think they are grounded in reality. Elon Musk already owns multiple companies and has his attention split and Tesla continues to smash and beat expectations every quarter. Tesla will continue to grow and improve its production and delivery numbers.

Tesla Has a Long Way To Go

Right now, Tesla is at around $900 per share. There are macroeconomic conditions that will likely keep the price down, but eventually, this won't be the case. Tesla is on track to continue to grow its production and delivery by 60% for at least the next few years - and I think it will be longer.

There are multiple things that make me bullish on Tesla, and I'll list them here:

* Technological and brand advantage - everyone wants a Tesla
* Tesla will get investment grade rating eventually - it should have it now
* Tesla has the best cars in each class (Model 3, Model Y, Model X, Model S)
* Tesla will soon have the best truck in class - the Cybertruck
* Tesla will solve FSD (full self-driving) eventually
* Tesla will create an automated robot to solve human labor
* Tesla energy will eventually start to surpass the auto business
* Tesla will build best in class cars for other vehicle segments (like a van)

These are just a few of the things that make Tesla a generational opportunity. There are risks with Tesla, of course, and the main risk is that Elon Musk is one of the drivers of the great change happening in Tesla. There is not another Elon Musk. My belief is that Elon has a very clear plan and vision that can be executed on even if he is not around.

What do you think about Tesla losing 12% in a single day? When will the macroeconomic issues subside?

Tesla Contemplates A New Strategy for China Retail even As Sales Boom
Jay Leno on Elon Musk & EVs: “I Think He Should Get ... Credit"
END_OF_DOCUMENT_TOKEN_TO_BE_REPLACED