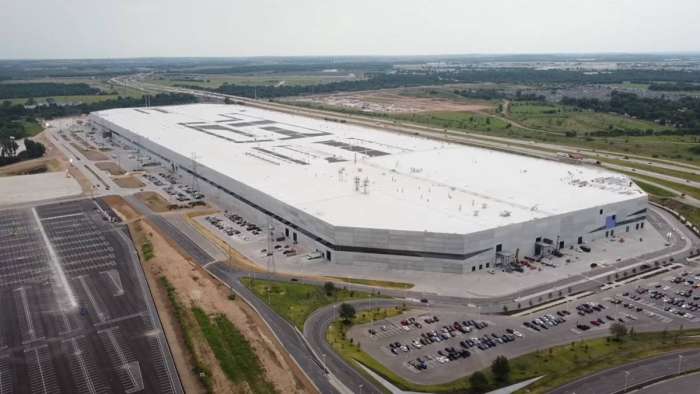 Spying on the New Tesla 4680 Model Y at Giga Texas

Jordan, from Out of Spec Reviews, got close to Giga Texas and with a drone to give us an update on the 4680 Model Y at Giga Texas as well are more details about Tesla's largest giga factory. Let's see what he found out.
Advertisement

Spying on the New Tesla 4680 Model Y at Giga Texas

We have word that Out of Spec Reviews has been able to visit Giga Texas and get a sneak peak at the 4680 batteries Model Y vehicle being built there. Giga Texas is the largest giga factory Tesla has ever built. Let's see what he has to say.

Jordan, from Out of Spec Reviews, was just outside Giga Texas, where Cyber Rodeo happened and the first Model Y with the new generation under pinning's was constructed. This is the 6th major factory for Tesla and 4th in the U.S. Giga Texas is 3/4 mile in length - basically 15 city blocks and 1/4 mile in width. The total perimeter is almost 2 miles. It's an enormous factory (8 million square feet).

The volume is what is most impressive. 338 million cubic feet. There are blue and black Model Y's in the distance and the parking lots are massive. Jordan got there during a shift change while people at the factory were getting there and leaving it. The factory is half construction zone and half car factory.

Giga Berlin put bays all along the outside of their factory so trucks could park near the building as clear as possible. Giga Texas has 3 buildings in parallel. They made road ways between the buildings are long roadways so that other vehicles can get pieces and parts more to the actual place they need to be delivered to. This is even more efficient than Giga Berlin.

There is a large casting for this new Model Y. This is different than the Model 3, which is a lot of components put together. Tesla is now introducing a front and back casting that is put together. That will allow for simplification of engineering and lower cost - everything becomes better.

The 4680 battery cells are a structural component which is now part of the structure of the car, which will help the car stay together more and handle driving and corners better. There is also a standard range Model Y being offered at Giga Texas, which is an AWD. This is about $2,000 cheaper.

Some have seen Tesla offering these standard range Model Y vehicles with 279 miles and a 0-60 mph at 5 seconds. This is a slightly cheaper Model Y at a cheaper price point with upgrades and new technology.

The 4680 structural battery pack is the biggest thing here. Just like an air plane where the wings have the fuel, the Tesla 4680 Model Y has the batteries as part of the car that is structurally holding up the car.

Jordan came to Giga Texas to show us footage from drones and to get as close as he possibly could.

How many more giga factories will Tesla make? Will they make a giga factory bigger than Giga Texas?