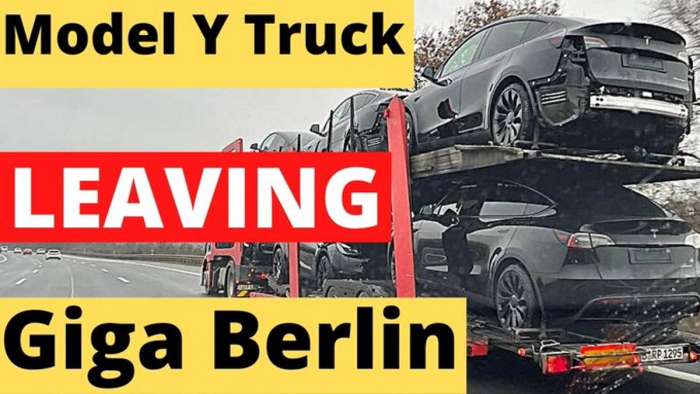 We have new news that 6 performance Model Y vehicles are in transit leaving Giga Berlin. The question is, where are they going? We'll answer what we think and more.
Advertisement

We see from the Steve&Julian Facebook page 6 performance Model Y vehicles leaving Giga Berlin. There are many theories as to why this is and we'll explore what those are and what we think the closest answer is.

In related news: Giga Berlin should be approved early in 2022!

If these vehicles are using 4680 battery cells and Tesla is starting with the Model Y performance in Europe from Giga Berlin, that is going to mean some serious profit margins - most likely much more than the average of 30% that Tesla had last quarter.

These could be demo cars

These cars could be used to demonstrate the capability of the Model Y performance vehicle from Giga Berlin. There may be interested groups and parties that want to see how the cars perform. Perhaps there is a police department interested in the cars, or some other organization.

These could be used for crash tests

Tesla is known for their safety and making sure that its cars from Giga Berlin pass all crash tests is a necessary step before production. I give this one a very good chance and would say 8 out of 10 chance that this is the case. Tesla puts safety first above all else.

These could be used for final validation before production

Someone commented on Twitter that these cars could be used for tailpipe emissions tests or water consumption tests. Those don't make a lot of sense to me. Tesla vehicles do not emit exhaust because they are not ICE vehicles.

Tesla's don't use much water either, outside of the washer fluid, so I'm not understanding the Twitter comment referencing this. I think they are either misinformed or joking.

Somewhat in line with the crash tests, there could be other inspection and ratings being done on these vehicles by 3rd party agencies. They could do a full inspection of the cars before signing off that they agree they are ready for full production.

These could be special gifts for people

These cars could be special gifts for people in Germany that paid an extra premium for these Model Y vehicles. Now, this is pure speculation on my part, but the thought crossed my mind. Since the cars are leaving on a truck, clearly the cars were not meant to be driven yet and perhaps those getting them wanted it that way.