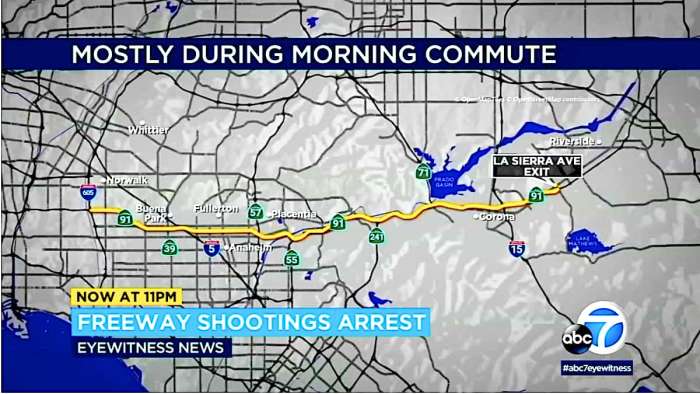 TeslaCam (Tesla’s integrated dashcam system) chalks up yet another victory in helping police take a bite out of crime recently by finding a suspect who may be responsible for over 100 BB gun shooting incidents during this past month on Californian roadways. Plus, what you need to know about owning a BB Gun in California.
Advertisement

According to a KABC News report in Riverside, California, police have recently arrested ex-convict Jesse Leal Rodriguez under charges of three counts of attempted murder and assault for reportedly shooting at vehicles with a BB gun, shortly after a driver of a Tesla reported his window was shot out near the intersection of Hamner Avenue and Hidden Valley Parkway in Norco.

The Tesla driver’s onboard dashcam system captured video images of the accused’s red SUV that is believed to be the source of BB gunfire that shot out a window on the Tesla.

The news report states that:

Rodriguez was taken into custody near the 91 Freeway and Tyler Street, after Riverside police stopped him for questioning because his red Chevy Trailblazer matched the description of the suspect vehicle.

Rodriguez's criminal history included convictions for carrying a loaded, unregistered firearm in public and participating in criminal street gang activity. He was sentenced to 32 months in state prison in April 2013. The California Department of Corrections and Rehabilitation said he was paroled in January 2015 after serving his full term, per law. He was discharged from parole in January 2018.

The significance of the TeslaCam video footage is that it could help investigators determine whether the accused is also responsible for a string of BB or pellet gun shootings that have occurred on or near the 91 Freeway over the past 30 days. However, the police also point out that some shootings could be due to other as-of-yet unidentified assailants.

Under California law, It is a crime if a person intentionally shoots a BB gun at another person, even if a person shoots at someone else and misses. Moreover, when such activity puts another persons’ life in danger such as causing an accident on a roadway, it can result in an attempted murder charge. BB guns under California law are considered to be “imitation firearms” which can carry charges of assault with a deadly weapon.

Rodriguez is being held on $750,000 bail due to the seriousness of the crime that includes three charges of attempted murder due to that three people were inside the Tesla. He is set to be arraigned on June 1.

Police advise all citizens that after a suspected BB gun incident while on the road, to call the police immediately who can then use their own roadway CalTrans camera system to help locate and identify potential suspects.

In spite of some having misgivings of what has been referred to as an Orwellian-scale of privacy invasion in newer model EV’s, camera systems have proved useful in both crime prevention and prosecution. In 2019 the website Electrek.Co alerted readers to an important news story on FOX13 Salt Lake City about how TeslaCam footage was used by police to track down a truck driver who pushed Tesla and another vehicle off the road during a side-swipe driving incident.

More recently, Torque news has reported in April of this year how Tesla cameras have contributed toward identifying a suspect involved in a major hate crime.

Furthermore, as Torque News writer Daniel Cappo points out in another recent article about crime and Tesla cameras, for non-Tesla owners there is a distinct advantage to choosing to parking your car beside a Tesla equipped with Sentry Mode.

For more about Tesla’s camera system, be sure to check our website for news and further updates.