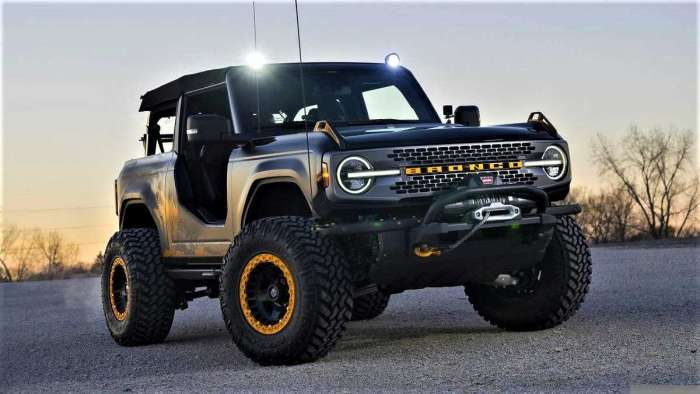 Need a reason for following the advice to never buy the first (or even second) round of any new production run of cars or trucks? Here’s a good example proving this advice to be apt based on recent news that the new Ford Bronco engines are literally self-destructing in traffic.
Advertisement

In an earlier article, we learned about the problems car buyers face when purchasing the first year of many models which according to some automotive experts are best avoided for the first two years of its life due to this is when you will see the most problems manifest. As it turns out Ford Bronco owners are currently finding themselves with this problem.

In case you have missed this bit of news earlier this month, the NHTSA (National Highway Traffic Safety Administration)---a governmental agency tasked with the responsibility to investigate and act to reduce deaths, injuries and economic losses from motor vehicle accidents---was reported having received numerous complaints from owners of the new Ford Bronco with the 2.7 Liter V6 EcoBoost engine.

These complaints have reportedly initiated an official investigation by the NHTSA due to a significant number of complaints of Bronco engine failure occurring in traffic, which could result in traffic fatalities due to the abrupt nature of the vehicle coming to an engine-grinding halt without warning to the driver or surrounding vehicles.

According to a recent Scotty Kilmer YouTube video about Ford’s problem with the new Bronco, the majority of engine failures are occurring within the first 5,000 miles of ownership, with at least one occurrence at just 984 miles.

Here’s what Scotty has to say about this engine problem and what it means right now. Please note that the time point related to the topic runs from time point 00:00 to 2:20.

For additional news coverage about the Bronco, here is a video news report from Detroit about the problem:

So, What’s Going on with Ford?

Currently, unsubstantiated claims based on initial social media statements from reputed mechanics within Ford stated that the engine problem is due to a failure in the valvetrain system where inferior valves supplied by another company are mechanically failing after being subjected to typical high heat engine conditions.

Today, Ford has not confirmed or denied these claims but states that they are investigating the problem and that customers experiencing the engine issues are covered under the vehicle’s 5-year/60,000-mile powertrain warranty. Furthermore, the NHTSA has not yet issued a recall notice on the Bronco; which if recalled, could include up to potentially 25,538 vehicles.

On social media, however, the likely view of why this is happening is not an engineering design problem (since the V6 EcoBoost engine has performed well in earlier models) but another sign that automakers (not just Ford) are continually turning to using the least expensive parts sources possible to save on production costs.

Which is not without merit---anecdotal evidence hints that auto parts quality control is an increasing problem for mechanics buying parts for car maintenance and repair that turn out to be increasingly subject to failure more often today than it was in the not-so-distant past.

For now, however, stay tuned as we will update this topic as soon as any new information becomes available released from Ford and/or the NHTSA.

For additional articles related to engines not meeting expectations, here are two popular past articles for your consideration:

COMING UP NEXT: Reasons Why Your Car’s AC Died and The Repairs to Fix It