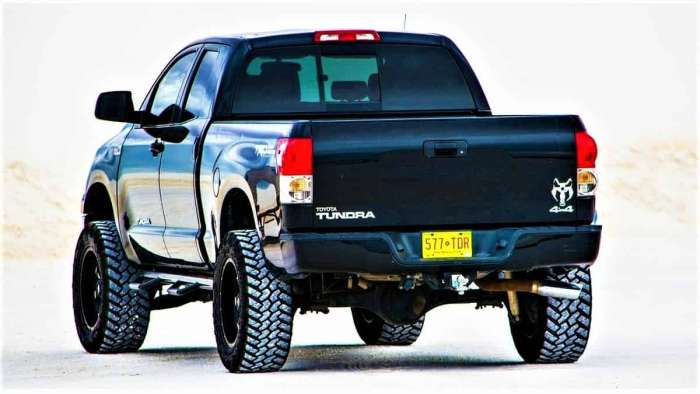 A popular mechanic warns that an engine change in the Toyota Tundra will not provide you with what earlier Tundra’s provided for owners who wanted a big truck that could handle a big payload.
Advertisement

One of the things about being a kid in the 70’s is that even nearly 40 years later many of us find those catchy advertisement jingles are so burned into our brains that I wonder if they just may last well into dementia when the times comes. One of my favorites are the classic “Hai Karate” cologne commercials.

One example of those memory triggers from days-gone-by that has plagued me for many years is whenever I hear or read the word “V8” ---and yes, it is an official noun even with a digit in it.

Talk about V8 engines with me and I can hear somewhere in the background recesses---possibly even at the brainstem level by now---one of those V8 vegetable juice commercials playing.

Back to Trucks and the Point

What prompted this mental reverie is a recent Scotty Kilmer YouTube channel episode where Scotty bemoans what he considers to be a big mistake Toyota made by putting V6 engines into the Tundra when customers really buy it for its V8 performance.

Related article: Chevy Trucks to Buy and Not Buy Explained by a Chevrolet Mechanic

According to Scotty, Toyota tried to make up for its lackluster V6 power by putting in not just one but two turbo chargers into it to make up the lost power, but still make it more fuel efficient at lower speeds. However, this may be a failure on both counts and is a big win for Toyota because it means more repairs will be needed to maintain these dual turbocharged vehicles that will make the Tundra less reliable.

Semi-related article: Blown Turbo at Only 60,000 Miles on This Chevy. What Happened?

If you are in the market for the popular Toyota Tundra, listen to what Scotty has to say about it and follow the comments from Tundra owners who know what Scotty bemoans is true and why the V6 fuel economy promise/argument does not really pan out as a golden truth---BEFORE some slick salesperson tries to convince you that the turbo V6 is just as good as the V8 model.

It just might save you from a head-slapping “I could have had a V8!” moment.

Semi-Related article: Guide for Choosing a Four-Cylinder Turbo Over a Typical Six-Cylinder and Vice Versa

Avoid the New Toyota Tundra at All Costs

For additional articles about turbocharged vehicles, here is an informative one to consider “Best Four-Cylinder SUVs With Turbo in 2021.”

COMING UP NEXT: Three Giant SUVs Square Off for an Offroad Truck Challenge

Jay wrote on May 2, 2022 - 8:50am Permalink
I’ve had the opportunity to own a truck fr each one of the 3 big manufacturers to the point where each vehicle were no longer safe to drive due to the wear and tear from years of work and plowing. I always drive and work my trucks for years with the proper maintenance. My last truck (which I still owe) is a 2007 Tundra SR5 regular cab with a 4.5 V8 engine, a cold air intake and Borla exhaust system which extends the gas mileage also a snow plow. I can tell you that after 115 k miles this truck is still so strong as when new. No dash warning lights. 10k pound towing capacity and engine feels better the more I drive it. Too bad a 6 cylinder is been tucked into the me version. The TUNDRA should have a V8 period!