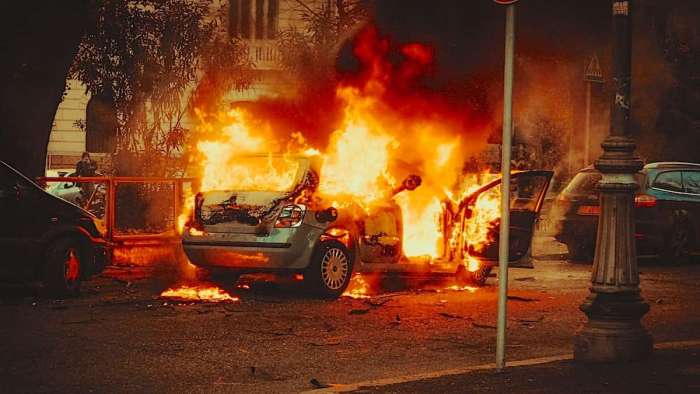 The Littlest VW SUV Could Be The Biggest New-Model Deathtrap

An important recall warning is in effect for 16,737 of the latest new model Taos SUVs sold this year that has a high potential of becoming one of the worst ways to die from a vehicle accident---or even while just cruising down your neighborhood street.
Advertisement

Recently we learned that a cracking fuel outlet flange in a range of Land Rover models from 2010-2016 led to a recall of approximately 111,000 vehicles. Today, we learn that VW’s 2022 Taos---dubbed as “The Littlest VW SUV”---is also now under a serious recall alert due to a strong possibility of a vehicle fire resulting from a detached fuel line.

Volkswagen has issued a recall for 16,737 Taos SUVs from the 2022 model year because of a problem with the lines that supply fuel to the engine. A quick-connector, which makes it easy to attach and detach hoses, may detach from the fuel supply line. If this happens, fuel will leak in the engine compartment.

What makes this recall especially remarkable is their description of a scenario where if the engine fuel line were to disconnect in traffic, at the very least the engine would stall to a stop. However, stalling in traffic could easily lead to a vehicle crash resulting in the leaking fuel igniting and turning into a catastrophic fire.

Volkswagen reportedly states that the reason(s) for the for the fuel line’s quick-connector to detach include:

No deaths or fires are known reportedly known to have resulted from the fuel line defect, but that the problem was discovered via a warranty claim last June from an owner.

Who This Recall Applies To and What To Do

Due to the incredibly dangerous condition of a fuel leak in ANY vehicle, dash warning lights, gasoline odors, and fluid pooling under your vehicle should be taken care of immediately.

Although information is listed as available through the NHTSA via campaign number 21V651 and/or the Volkswagen website under recall 20DB, neither sources appear to be updated with the info as of this writing.

For more about vehicle recalls, be sure to bookmark Torque News to stay updated with the latest automotive news that includes---but is not limited to---vehicle safety as well as car performance, car reviews, and car care.

For more about SUVs, here's an informative article about What Popular Midsized SUVs to Avoid and Which to Buy Instead.

Photo by Flavio Gasperini on Unsplash

Unhappy Taos Owner wrote on October 12, 2021 - 2:25pm Permalink
I leased a new Taos in July 2021 for my daughter to drive at college. It was recalled in August, 2022, and was impounded by the dealer because in his words was “too dangerous to drive”. My brand new car with 1,000 miles on it has been sitting at the VW dealer now for more than a month, and counting. No one knows when the parts will be available to make the repairs. I was not offered a loaner or rental. Meanwhile, I am expected to continue to make lease payments and insurance payments for a car that I do not have. VW has been totally unresponsive. It would appear that VW is headed for another huge class action lawsuit.
John n wrote on November 1, 2021 - 6:50pm Permalink
I am at 6 weeks and still counting. Although I bought mine and have a loaner Nonetheless I am now pursuing lemon law recourse. Vw can have their firecracker back!