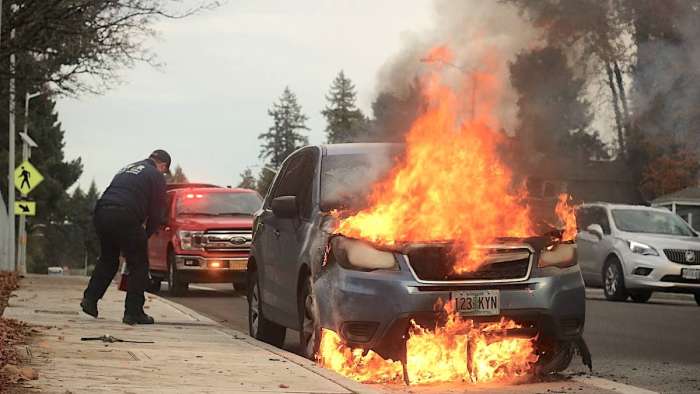 When Smelling Gasoline Around Your Car is an Immediate Problem

Have you smelled gasoline around your car, or perhaps noticed---but ignored---a small fluid stain in your driveway? If so, then you will want to hear about the latest recall alert to SUV owners about a potential gasoline leak and what you can do to avoid a dangerous driving condition that could easily end in flames. Plus, a true story about a vehicle fire that I caused!
Advertisement

Have you ever been involved in a vehicle fire due to engine or other problems? I have, and it’s a matter that deserves serious consideration because of the rapidity a vehicle fire can get out of control.

Back in my college days I used to housesit for faculty members on sabbaticals. During one house sitting job, I was left with a brand new Toyota Camry with leather upholstery and all the bells and whistles. The owner told me that I could borrow his car anytime if needed. I thanked him, but declined the offer since I had an old Buick LeSabre that was adequate for my needs. Plus, I had a history of bad luck with other people’s cars---a jinx if you will.

Long story short, while housesitting my Buick died and I needed to drive to town to get a part for it. Making an exception---just this one time---I went to the owner’s garage and started the engine on the Camry that had been sitting for about a month untouched. Car started fine and I drove into town.

However, while idling at a stoplight, I noticed the paint on the hood was bubbling. Traffic moved and I with it, panicking on my best course of action. Fortunately, a large parking lot presented itself. Once stopped in the lot, I got out of the car started to lift the hood, but then saw flames shooting around the edges. My brain stem functions kicked in and I dropped my plans of opening the hood and turned to run for help and call the fire department.

Before I could reach the store, I heard someone yelling and turned around. There was the car, its front end totally in flames…and moving across the parking lot. I don’t know how or why it was moving, but I was about to become responsible for a multi-car fire. Then the oddest thing happened. One car owner in the lot got out of his car and got into my flaming one and either put it in gear or applied the emergency brakes. Craziest thing I had ever seen someone do to protect his car.

By then, I could hear the wail of sirens and sat down on the curb to watch the show. The car was totally engulfed in flames by then. After the fire department did their thing, someone pointed a finger at me and the fire captain asked me to take a closer look at the burnt hulk of melted plastic and twisted metal.

Lifting the hood up where the fire originated was the charred remains of some rodents and an eagle’s nest-sized collection of twigs, leaves, cacti, paper, and whatever. Apparently, during that one month sitting in the garage the car became home to desert packrats.

Car was of course totaled, insurance reimbursed the owner, and the owner told me to pack my bags and leave. The silver lining of this story is that their college daughter had plans to take the car later that week for a Thanksgiving road trip. You can imagine the rest.

Anyway, the point of this story is that when fire happens in a car, it can happen in just span of a several seconds. And as such, even the remotest possibility of a fuel leak cannot be ignored like all of the driveway stains we normally take for granted and ignore until later.

Back to the recall.

According to a recent Consumer Reports recall alert:

The potential problem is due to a fuel outlet flange mounted on the fuel tank that is prone to cracking, which could result in fuel leaking from the tank. The automaker tells customers that the fuel leak might be detectable from a fuel odor, puddle, or stain of gasoline under the car and/or an amber warning light. And, that the leak presents a hazard because vehicle static could be an ignition source for the leaking fuel, leading to a fire.

As it turns out, leaking fuel problems are not new to past Range Rovers---poorly-installed fuel pumps have been a past problem. And more recently---according to a car complaint news source---the NHTSA reported last November six customer complaints, five field reports and 200 warranty claims about fuel odors and leaks from various Range Rover models. However, it took until now to get an actual vehicle recall out to protect customers.

If You Are The Owner of a Land Rover

The fix: Land Rover dealers will replace the fuel outlet flange with one of a revised design, free of charge.

How to contact the manufacturer: Land Rover will notify owners by mail, with letters expected to be sent on Oct. 8, 2021. Owners may contact Land Rover customer service at 800-637-6837. Land Rover’s number for this recall is N623.

Signs of a Fuel Leak in Your Car

Due to the incredibly dangerous condition of a fuel leak in ANY vehicle, dash warning lights, gasoline odors, and fluid pooling under your vehicle should be taken care of immediately.

However, you can have a fuel leak and not notice any of the aforementioned signs. But might be hinted at with these following symptoms because an engine fuel leak will reduce the flow and pressure of fuel being delivered to the engine and thereby affects its performance:

If you observe any of the above signs and symptoms of a fuel leak possibility, take it to a qualified professional---this is typically not a DIY project for most car owners.

If you have a vehicle fire-related story to share, please let us know about it in the comments section below. Your story could save someone’s life.

Photo by Riley Edwards on Unsplash