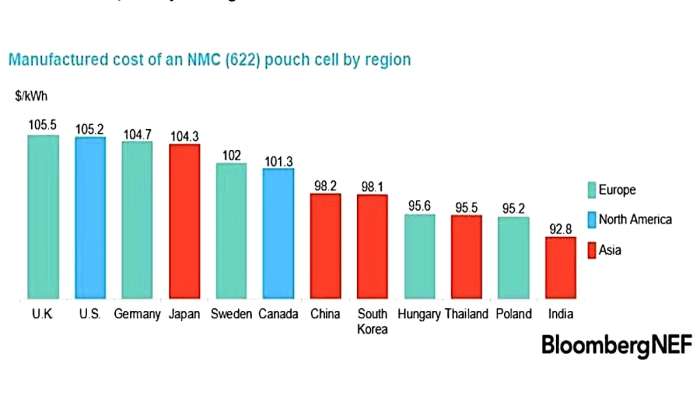 Batteries, Not Cars, May Be the Reason for Tesla to Go to India

Lithium battery scientist and Head of Energy Storage at Bloomberg NEF, James Firth, tweets a bar graph showing that the production of EV batteries may be the best reason for Tesla to go to India. The estimate lists India as the lowest cost country for manufacturing cells, which with subsidies, could reduce costs significantly - enough to be a game-changer and bring Tesla to India.
Advertisement

Car Sales May Not Be Not Enough

Multiple news stories since last year have speculated whether Tesla would go to India to build yet another Gigafactory as a way to increase production with reduced costs; while at the same time, broaden Tesla EV ownership globally.

Elon Musk Says Tesla For Sure Will Enter India, might be the location for the next Gigafactory

Moreover, Armen Hareyan--the Editor in Chief--of Torque News, makes this point quite succinctly in his article about The First Challenge of Tesla India's Manufacturing.

More recently, Torque News reporter Dan Cappo, wrote that Tesla was looking for showroom locations in New Delhi, Mumbai, and Bangalore. And, that the most likely flagship vehicle slated for its entrance into the Indian market would be the Model 3 because that is Tesla’s best-selling model.

Tesla Is Set to Launch Its First Electric Car In India

However, in a Times Of India news story speculating that Elon Musk will very likely bring Tesla sales to India, some market analysts expressed doubt that sales (at current Tesla prices) would be significant. Basudeb Banerjee, an analyst at Ambit Capital Pvt noted that “size of the luxury car market in India is minuscule with brands like BMW, Mercedes, Audi and Jaguar Land Rover accounting for just 30,000 to 50,000 sales annually.”

Because cost rules everything in manufacturing, the race for a more attractive EV battery has not been just about designing a smaller size cell with a greater power capacity; but, that the materials become cheaper and the manufacturing quicker and less complicated---in other words, cheaper as well.

Batteries Are The Key Factor for Tomorrow’s EVs

Now that EV battery improvement has progressed (including its production process), and Gigafactory construction is possible with quick build modular design, the timing may now be right and the best reason for Tesla to go to India. Not to sell cars, but to manufacture its latest battery design.

As Bloomberg NEF graph shows, the manufactured cost of an NMC 622 pouch cell differs significantly region by region, with India as the expected leader in cost lowering---particularly with recently approved subsidies for cell manufacturing. Reportedly, the subsidies include multipliers for performance, and could be worth up to $27/kWh at the cell level!

“Even if raw material prices increase there will be continued downward pressure on cell and pack prices. The electric revolution is here to stay!” stated Mr. Firth in his tweet.

Ajay Sachdeva wrote on May 15, 2021 - 5:48am Permalink
World would be a far better place without fossils.