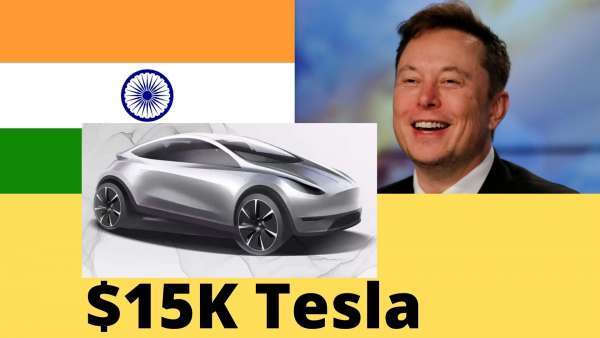 Do you know what will happen after Tesla sets up manufacturing in India, which was announced recently? In India Tesla must introduce a new electric vehicle, which sells between $10-20K.

The average price for a car sold in India is only around $10k. Even a vehicle costing $20k would still be called a premium segment ignoring 90% of car buyers today in India. Tesla, therefore, will most likely launch a new Indian Model, which is cheaper than the Chinese compact $25K Tesla model. The new India-made Tesla Model should be priced around $15k with 200 miles ( 300 km) range with no Autopilot hardware or software installed and say around $20k with the Autopilot hardware installed.

Labor cost is cheaper in India than China. Tesla can do it.

When I published my latest Tesla India manufacturing story in which an Indian official announced that Tesla will set up a factory in the Indian state of Karnataka, one member, named, made the following comment, giving birth to the idea of this story.

A user, named Sumeetydv commented at Torque News Youtube Channel (please subscribe for daily short EV news), and wrote about what Tesla must do in India in order to be successful, discussing Tesla's number one challenge in India.

How, you say! India has very low labor costs, around 1/3rd of China and 1/6th of USA. Also, since the purpose of Tesla is accelerating the world towards a sustainable future, it can't do without the 3rd largest Auto market in the world.

Just for perspective, Indian Automaker Tata Motors, (that promised the Air car) which owns Jaguar and Land Rover has launched a Tata Nexon EV with 200 mile range for around $18k last year. It's the same company which launched the world's cheapest car to be produced ever called Tata Nano for around $2000 almost a decade back.

Also, the average price for a car sold in India is only around $10k. Even a vehicle costing $20k would still be called a premium segment ignoring 90% of car buyers today in India. Also, Tesla launching a cheaper vehicle in India would create very high pressure on Indian Car Makers to compete with Model 1 and the entire industry would be accelerated towards Electric Vehicles, which exactly is the goal of Tesla!

What do you think Tesla should do in India once it starts building another gigafactory or some type of manufacturing in Karnataka?

Tesla-Funded Research Reveals One of The Biggest Mysteries of EV Battery
Tesla Tesla Buyer Nets a Whopping $12,000 Discount After Asking for Reduction
END_OF_DOCUMENT_TOKEN_TO_BE_REPLACED