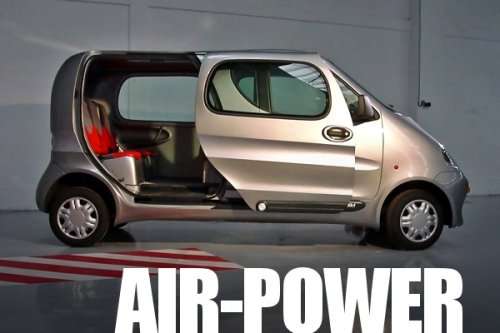 Tata Motors, India's largest auto manufacturer (posting sales of $27 billion USD), has been struggling to make a world wide name for itself. Their latest plan? Take their concept compressed air-powered car and send it to production.

For the past few years, alternative fuel conferences and blogs have been talking about compressed air as a power source. Some love it, some see it as an object of derision. Some don't know what to think. One of the strongest backers of air power has been Tata India.

The automaker is best known for the Tata Nano car, billed as the world's least expensive car (selling for around $3,500 US). Using the drive train from the European concept AIRpod from MDI, Tata showed a concept taxi car a year or so ago (pictured here). The claim was that it was capable of about 50 miles per hour with an 80 mile range - with a compressed air tank whose refill time was only two minutes.

The problem is that compressed air isn't exactly the most efficient way to propel a vehicle. While it might work fine for a child's toy (anyone else play with balloon-powered boats and cars as a kid?) or even a bicycle, it doesn't really scale up well. Compressed air is about 25-30% fuel efficient.

Tata has been working with MDI since 2007 on compressed air-powered cars. MDI has a track record of making "interesting" claims and putting off showing any tangible results. Both MDI and Tata have only fielded short-range demonstration models, usually using 350-bar compression (about 3,500 psi) in the tank - far denser than the compressed air found in your car tire pump or the local mechanic's shop. The 2-minute refill time is likely based on using an industrial air pump used to fill heavy cylinders for manufacturing use. Those pumps are not cheap and renting or leasing pre-filled bottles would become expensive, fast.

Tata's official press release says that phase one of its two-phase agreement with MDI has been completed. That phase was proof of concept, which they say has been given in two Tata-made vehicles. The second phase, commencing now, is to fine tune it for market "over the coming years."

Will we ever see a production compressed air-powered car? Maybe. Will it be able to perform well enough to sell in a world market? Don't count on it.

Nicolas Zart wrote on May 16, 2012 - 12:06pm Permalink
I test drove an early prototype 3 years ago in the South of France at MDI's HQ and found the whole concept interesting. It won't overtake general mass production cars any time soon, or even ever but it has a niche market. Airports already use them, mostly Amsterdam's Schipholl and Paris' Roissy. Where the drivetrain makes sense is with short, predetermined range runs, basically fleets. The greatest asset is that its exhaust is pure cold air. Think about the saving for ice cream trucks. The only problem with it is that air compression hasn't changed in over 100 years and once a new more efficient way has been found, this will make sense for small commute. The prototype I drove felt like an 125 to 250cc scooter, in as far as sound and vibration. MDI also truly has a revolutionary manufacturing concept by creating small assembly lines that can be built quickly anywhere thus avoiding shelf life in one central repository. Negre, the guy behind the air engine is an interesting fellow and has good ideas. I'm glad it's finding a practical application with fleets.
Aaron Turpen wrote on May 16, 2012 - 12:52pm Permalink
Thanks, Nicholas. I agree there are probably some very limited markets for this car, but most of those are currently being serviced by (more efficient) golf carts and similar electrics. A handful of industries use air power where being completely non-flammable is required, but those are very small and specialty.
Luc Adriaenssen wrote on May 22, 2012 - 10:39am Permalink
A few positive additions which may and will brighten the final conclusion. Fact is that work goes full force to industrialise the smaller range of Tata cars as air-powered urbans. Fact also is that MDI managed to get much more efficiency out of their air-engine than the 25-30% you mention, they've actually doubled that. Fact is that Tata Motors are the market leader in the utmost adapted and ideal market place for this alternative fuel: - air is cheap; forget about the cost of the industrial compressors, do you actually buy a gasoline station to fill up your car? - the cars will be cheap, because light and fairly basic, therefore extremely well adapted to emerging economies which are growing fastest today - air is very much present everywhere (just like hydrogen), the exhaust is clean in use (actually cleaner than the air in all city-centers!) - it's cradle-to-cradle: energy is just used, then the "fuel" is returned to nature (as water) - AC is free due to the low exhaust temperatures (it works, it's installed) which is an enormous plus in climates like India's. - (this is personal) no government will be able to levy taxes on air! Nowadays we fill up our machines with 80% taxes + 20% gas!! Never was it meant to replace conventional or alternative energies or carriers. But a very small percentage in today's mobility market makes for quite substantial numbers. So, my conclusion is: will be see the air-powered Tata's and MDI's? YES! Will it sell on the world's market? YES, for reasons above. Greetings all, LucasPB
Aaron Turpen wrote on May 22, 2012 - 11:51am Permalink
You're ignoring several obvious points: FACT - these cars cannot be made to safety standards for developed markets without severely compromising their range and performance. FACT - compared to gasoline, yes, compressed air is cradle-to-cradle, but energy must be used to compress that air and that energy is going to likely come from electricity, which is currently produced primarily by burning fossil fuels. When you sit down and think about that, you'll realize.. why not just use the electricity directly? What's the point of wasting the time/energy with the air compression? FACT - MDI only claims to be getting those efficiencies, they have not demonstrated them to a third party.
Luc Adriaenssen wrote on May 22, 2012 - 12:05pm Permalink
If you have proof that Tata Motors cannot make their cars to existing safety standards, you may want to discuss this with TML. Cradle-to-cradle: ever heard of renewable energies? Efficiency testing: apparently you're not a third party. Tata Motors is. Cool man, cool!