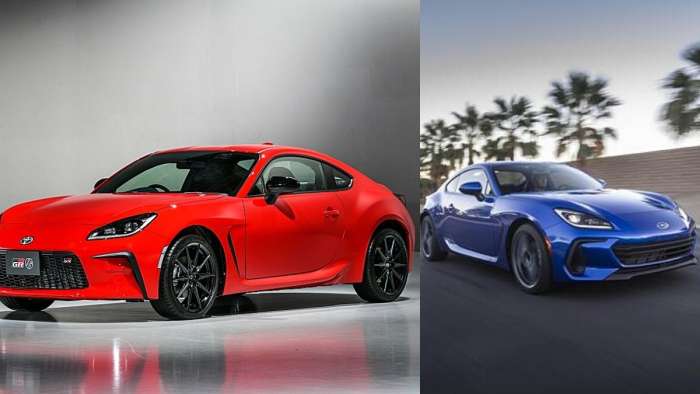 A Missed Opportunity: The Styling of the Toyota GR 86 and the Subaru BRZ

Toyota and Subaru’s joint sports car venture has provided many people with loads of fun. The Toyota 86/GT86/GR 86/Scion FR-S and the Subaru BRZ are commonplace now – an affordable sports car has great enthusiast appeal, especially when offered with a manual transmission and skinny tires for more spritely handling. Toyota and Subaru just unveiled the second generation of their boxer-powered coupes. The cars should be competent, well-engineered and generally fun.
Advertisement

Tetsuya Tada and Yoshinori Sasaki engineered the original model as a spiritual follow-up to Toyota’s famous AE86 and Sports 800. Seemingly every review of the original models mentioned the car’s admirable and entertaining driving characteristics and barely touched on the awkward styling. Many aftermarket companies have since developed body kits and spoilers to alter the styling, often to little or no avail.

But that’s all in the past. 2022 will bring a new Toyota/Subaru sports car – the next generation of the GR 86 and BRZ. They are improved over their predecessors in countless ways in terms of driving characteristics and features, but Toyota and Subaru missed out on a huge opportunity for the redesign. The new model still retains the old one’s bubble-like roofline and awkwardly short trunk, while continuing with odd touches like a swoop that starts below the doors and curves around the rear wheel arch and fender into the rear taillights. A weird plastic lower rear bumper sits above the dual exhausts.

Toyota and Subaru could’ve made a car that broke new ground with design, but instead seems to have merely tweaked the old one. Imagine a BRZ and GR 86 with a fastback or a longer hood. A lower, less bulbous roofline over the passenger compartment would help, too. The “spiritual successor” to cars as attractive as the trapezoidal AE86 and the big-eyed Sports 800 should look better than it does.

Admittedly, the Toyota and Subaru’s new generation’s front and rear styling is an improvement over the previous generation’s. The old model’s oddly shaped headlights have been replaced with simpler ones complemented by L-shaped running lights. Below the headlights are vents that frame a generally rectangular grille on the Toyota and a smiley grille on the Subaru. The rear end no longer has a “frown” stamped into the trunk lid and instead has wing-like taillights and a bit of a smile in the bumper surrounding the license plate frame.

Of course, styling extends beyond the exterior. The new interior looks to be reflective of the car’s purpose in that it is generally driver focused. There are no attempts to make a swoopy dashboard or integrated climate vents, and the infotainment screen looks simply tacked on as an afterthought. Three climate control dials have digital displays in red, and various buttons dot the dashboard as it connects to the center console. The interior, at least in the press photos, looks very dark, even with its contrast stitching. There is an impressive digital gauge cluster, however, which appears to be customizable.

As with the previous generation, the styling between the Toyota and Subaru models will almost be indistinguishable. Unless you study the front end for a while, it is unlikely you’ll be able to differentiate between the two if they drive past you in the opposite lane.

The new Toyota Supra is at least distinctive, with its prominent, protruding noise and deep vents and cuts down its side and rear. Clearly, the designers of the Supra were aiming for something striking, bold and well-proportioned. Subaru has no other current sports car in its model range to compare the BRZ’s styling to, but it wouldn’t be hard for Subaru, once responsible for the SVX and XT, to come up with an interesting and innovative-looking sports car design.

The Toyota and Subaru are certainly not ugly - the general proportions of a sports car rarely result in ugliness. They are also mild improvements over the previous generation’s design. The problem is that they are still just awkward. Toyota currently makes the surprisingly attractive Camry, Mirai and Avalon, and Subaru has a history of uniquely styled sports cars. Both companies have the capabilities and history that can bring about a beautiful sports car, but they ended up with the bland, oddly shaped GR 86 and BRZ. The current, similarly priced Mazda MX-5 Miata, despite also having some questionable design choices, remains a better-looking car than its Toyota and Subaru rivals.

Also see Torque News Subaru reporter Denis Flierl discussing BRZ not being able to catch the Toyota 86 and what the next-generation will bring.