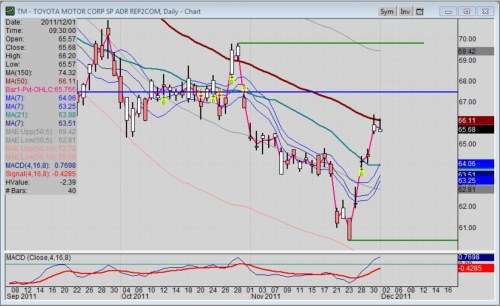 The daily chart of Toyota stock once again proves the dynamics of price do not lie, as three upward price gaps in the past five days of trading imply a major change in sentiment towards bullishness.
Advertisement

First, looking back to the negative front, Toyota Motors (ADR:TM) had the cheaper labor of Thailand being offset by the weather. Problem was, this weather is cyclical as monsoon rains return every year; but this year produced floods not seen in many decades.

Now, Toyota is signing a memorandum of agreement (MOA) with BMW for exchange of technical knowledge up to and including exchanging German diesel engines in Europe for knowledge of lithium-ion battery development.

Recall it was just four weeks ago when Toyotas Motors (ADR:TM) stock was trading over $69. Just last week it was treading water at the $64 level.

Good news of Toyota is, the company announced a return to production due to the floods near three Thai assembly plants. Furthermore, this announcement with BMW at the Tokyo Auto Show

Of course, in the economic world, Toyota stockholders have had to deal with the general market sell-ff from the Greek problems and now Italy which might drastically affect European sales.

The recent swing low of 60.37 is intermediate support, while the swing high of 69.81 on 10/28 stands as upward swing resistance; and that defines the swing range whereby these latest price gaps to the upside have yet to breach.

For the record, the next level of major support level dates back to the lows of late 2008 and early 2009 which stands at the 57 level.

Will TM test the upper resistance levels at 67.57 and 69.81? In time, that is likely to happen, especially with bullish gaps implying a bullish sentiment for Toyota stock. However, as I wrote last time, any good news can surely drive TM higher, but the economic conditions in the world will likely act as a heavy burden; and it’s difficult not to still believe in that scenario.

Furthermore, technical traders firmly believe that gaps like to get filled because the market somehow deplores a vacuum. Well, TM has at least three gaps on the daily chart for the past five days alone; so a pullback would not be a surprise unless an early Santa Claus rally this year becomes over exuberant.