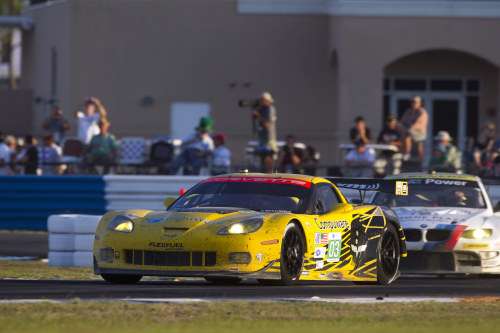 The Chevrolet Corvette, the best-selling luxury performance car in the United State, was inducted into the Sebring Hall of Fame during the weekend; and it will be celebrated with a special 427 Convertible Collector Edition, as well as a special 60th anniversary package for 2013.
Advertisement

I was six years old when Corvette first competed at Sebring in 1956. Since that year, 231 Corvettes have competed in the Twelve Hours of Sebring race, 24 of them scoring class or category victories in this legendary contest.

Unfortunately for Chevrolet, the 2012 race was won this time by Audi which returned to victory at Sebring International Raceway for the first time since 2009. According to the official Sebring website, it was a convincing victory in the 60th Anniversary Mobil 1 Twelve Hours of Sebring Fueled by Fresh from Florida as Audi finished 1-2 at Sebring for the first time since 2005.

According to the records, the closest Corvette got this time was a 19th overall position for the Corvette team #33 of Jan Magnussen, Antonio Garcia and Jordan Taylor of Apopka, FL. However, their Corvette labeled as a C6-ZR1 finished second in the GT Class. The entire Corvette Racing finished strong in Sunday’s 60th anniversary race, also placing third in the GT Class.

For the historical record that applies to the Hall of Fame, though, seven of the Sebring wins were tallied by Corvette Racing. That record makes them the most successful team in the history of the American Le Mans Series (ALMS), according to the GM news release.

“We are thrilled that Sebring has recognized the success of the Corvette on the race track by inducting it into the hall of fame,” said Russ Clark, Chevrolet marketing director for Performance Cars.

“Even more important than the awards and race wins are the benefits to our production vehicles as a result of our racing programs,” said Clark. “We have been successful at transferring racing technology to the street, especially in our high-performance vehicles such as the Corvette ZR1, Z06 and our carbon fiber models, including aerodynamic, powertrain, chassis, braking, safety and design features.”

In celebration of the 60th anniversary of the Corvette, Chevrolet is set to promote and sell the 427 Convertible Collector Edition, as well as a special 60th anniversary package that will be available on all 2013 models.

Founded in 1911 in Detroit, Chevrolet is now one of the world's largest car brands, doing business in more than 140 countries and selling more than 4 million cars and trucks a year.