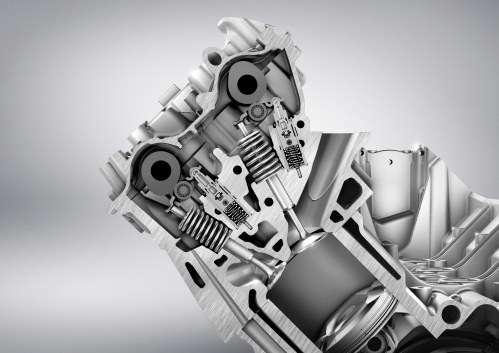 In line with its "AMG Performance 2015" strategy, Mercedes-AMG is meeting its promise to continuously reduce both the fuel consumption and emissions of new models over the next few years with the new V8 motor - while reaching new heights with the central brand value of "Driving Performance."

The distinctive AMG 5.5-liter V8 engine with AMG Cylinder Management and direct fuel injection will find exclusive use in the all-new 2012 SLK55 AMG, which will celebrate its world premiere at the International Motor Show (IAA) in Frankfurt/Main in September, 2011. This means that the SLK55 AMG will remain the only roadster in its segment with an eight-cylinder engine.

Even with peak output increased by 60 hp to 415 hp and torque increased from 376 lb-ft to 398 lb-ft, the fuel consumption is about 30 percent less which places the new SLK55 AMG among the top performers in its segment.

For the record, the new M152 is based on the AMG M157 5.5-liter V8 bi-turbo engine which first debuted on the 2011MY CL63 AMG and S63 AMG. Numerous components and systems are basically identical, such as the displacement, bore/stroke, distance between cylinders, ECO stop/start system and direct injection technology. Distinguishing features versus the M157 include the new intake air ducting, new cylinder heads, the modified valve drive, an adapted oil supply system and an optimized crankcase.

“With the new 415 hp AMG 5.5-liter V8 engine we have once again created a real masterpiece," says Ola Källenius, Chairman of Mercedes-AMG GmbH. “The M152 sets an outstanding example for efficiency, while demonstrating the creativity and expertise of our engineers, who took their inspiration from Formula 1 when developing the cylinder shut-off system. This makes the new, naturally aspirated eight-cylinder the perfect power unit for the new SLK55 AMG, which will celebrate its premiere at the International Motor Show in Frankfurt/Main in the autumn.

Friedrich Eichler, head of powertrain development at Mercedes-AMG GmbH, said, "Thanks to the innovative AMG Cylinder Management system and other high-tech components, our newly developed AMG M152 naturally aspirated eight-cylinder engine achieves the fuel economy of a four-cylinder with the muscular power delivery and emotional sound experience of a V8. A sports car engine with technology taken from Formula 1 - I am convinced that the new SLK55 AMG will meet the high expectations of all sports car fans,"

The high-tech M152 engine not only stirs emotions with its extraordinary power delivery and torque, but uses a combination of advanced technologies which is unequalled anywhere in the world. For example, no other gasoline engine features direct injection at a pressure of 2,900 psi, spray-guided combustion and piezo-injectors in conjunction with map-controlled cylinder shut-off, an all-aluminum crankcase with "spectacle" honing, four-valve technology with continuous camshaft adjustment, a high compression ratio of 12.6 : 1, an ECO stop/start system and generator management - while revving to a maximum of over 7,000 rpm. All these design features lead to high thermodynamic efficiency, which is the foundation for high fuel efficiency and low exhaust emissions.

Also for the record, this technology is similar to what’s used in the 750 hp V8 engines used in Formula 1, where efficiency also plays a major role in this ultimate form of motor racing. Two or four of the eight cylinders are cut off when cornering at low speed, during Safety Car laps or for pit stops.

The cylinder shut-off function is available over a wide engine speed range from 800 to 3,600 rpm if the driver has selected transmission mode "C" - Controlled Efficiency. The AMG main menu in the instrument cluster informs the driver whether cylinder shut-off is active, and whether the engine is currently running in four or eight-cylinder mode.

No less than 170 lb-ft of torque is still available in four-cylinder mode - enough power to ensure plenty of acceleration in most driving situations. As soon as the driver has a need for more power and leaves the partial load range, cylinders two, three, five and eight are activated. The switch from four to eight-cylinder operation is immediate and imperceptible, leading to no loss of occupant comfort whatsoever. At an engine speed of 3,600 rpm the activation process takes no longer than 30 milliseconds.