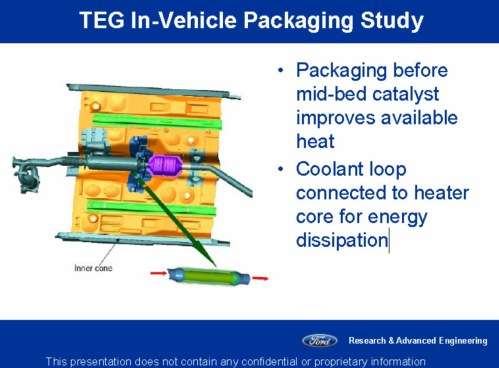 Automobiles waste more than two-thirds of the energy of the gasoline they burn; and most of that goes out the tail pipe as hot gas. The Department of Energy (DOE) sees the potential to recapture waste heat energy using thermoelectric semiconductors.
Advertisement

Nowhere is the potential greater to recover and convert this waste heat into electricity than hybrid vehicles, which are both IC engine and electric.

Think further of the stop-start systems. The engine literally shuts off but still needs electrical power for components like radiator, lights, air conditioner, not to mention all those new auto-tech gadgets.

Enter the science of thermoelectricity and devices like thermoelectric semiconductors (TE). These are solid-state devices that heat and chill, for example, luxury car seats. However, unlike the car-seat heater/chiller application, which feeds electricity to TE materials to induce them to be hot or cold, the idea behind a TE generator is to run the temperature-sensitive substance in reverse. By subjecting the device to waste heat, it can produce electricity.

In other words, wherever there is a heat gradient, such as between exhaust gas and engine coolant, there is the potential to induce a voltage; and that’s where these TE devices come in: they become electrical generators from heat.

This phenomena has not been lost on the U.S. Department of Energy (DOE) which has prompted a program to help fund researchers at General Motors Company (NYSE: GM), Ford Motor Company (NYSE: F), and BMW to find out if the materials could recapture energy that is lost in engine exhaust by turning waste heat into electricity.

One proposed solution from the Automotive Waste Heat Conversion to Power Program - 2010 Vehicle Technologies Program Annual Merit Review: Arrange the TE engines around a tube through which the exhaust gas passes. Use rings that are electrically isolated from the tube but thermally conductive as the hot side substrates.

Until now, the low conversion efficiencies versus the high costs of existing TE materials have kept such an application from becoming a commercial reality. If successful, though, significant fuel savings would be realized; a win for all.

Having worked in auto design and engineering, I affirm this is not a new consideration. The auto industry has long wondered how their vehicles might squeeze out even a few percent more useful energy from gasoline and diesel, but nothing practical ever seemed to emerge.

So, it’s great news to see things have changed, as GM engineers are now testing a prototype thermoelectric exhaust-heat energy-recovery device on a Chevy Suburban. In Phase 5 of the DOE program, TEG systems were scheduled to be integrated into the exhaust systems of BMW X6 and Ford Fusion vehicles.

According to the report per DOE Project ID # ACE051 released in 2010, Faurecia, a Tier 1 global leader in exhaust systems, joined BMW, Ford and BSST and is leading the TEG subsystem integration into the exhaust system. In parallel, Amerigon/BSST, through a self funded collaboration with OSU and Northwestern, has developed a pilot production facility, ZT Plus, for the manufacture of advanced TE material.

Of course, the commercialization of any new technical concept for automotive comes down to two key elements: weight and cost. The AE report noted TE specialists agreeing that a successful exhaust heat recuperation product could weigh less than 10 kg (22 lb), but cost in the range of $500 to generate 1 kW of electrical power.

Right now the focus is to develop TE-based A/C and heating devices, as the DOE has also awarded contracts to GM and Ford. Also according to the AE article, these units use zone concepts. This reminds me of some heating and A/C systems in commercial buildings. Borrowing from this concept would allow the passenger compartments to warm and chill more efficiently than conventional, full-cabin HVAC systems.

As you can see, this goes beyond just the TE units, but requires a new thinking and collaboration for managing the entire heating and cooling system of the automobile. Still, I can't help but wonder why we don't just change the engine itself into something more efficient like the split cycle, where the efficiency gains are quantum by comparision, rather than chase for every meager drop of wasted energy from old IC engine concepts.