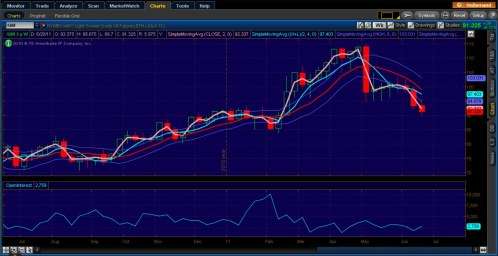 Update: International Energy Agency acting like an oil speculator and a political shrew

Guess the percentage of America’s donation. Furthermore, question why release now, especially when the weekly chart here shows Nymex Light Sweet Crude Oil Futures tanking as of the first week in May? Is it a political strategy or an economic strategy? For certain it’s not an energy strategy.

The answer given by the IEA was to have an immediate effect on the oil market. That on the surface reads as economic. It did affect oil prices, but the question still is, why now when oil had already fallen?

Brent crude futures on the ICE futures exchange were surely down another 6.1%, while light sweet crude futures on the New York Mercantile Exchange fell by 4.6%. That part worked well; at least for the moment. However, the 60 million barrels represents less than one-day's global demand, making the announcement much more theatrical than substantive. [Update: the Monday morning announcement merelt changes the mix by including refined products like gasoline and diesel fuel, indicating the agency is truly playing its own specualtion game]

In justification of the decision, the Agency noted the disruption in Libyan oil supplies since the United Nations non-war began. It has also cost the world 1.3 million barrels of oil per day in exports.

Of course, some think it is a shot by governments over the bow of speculators. How ignorant, considering that speculators, unlike stock investors who are chronically long, do not care whether they are long or short oil at any given time. They just need a clear trend bias. That bias, though, is not created by speculators, but by the root cause, world monetary policies.

An important detail of the IEA's plan that seems to have received little recognition by the American press, though, is that 30 million of the IEA 60 million barrels to be released will come from the Strategic Petroleum Reserve (SPR) of the United States, representing 50 percent. One again, America pays as much as all of Europe for a Libyan problem that feeds al of Europe, not America.

President Clinton, on the other hand, released 30 million barrels in 1996-1997 to try and lower oil prices AND reduce the deficit. Now it appears President Obama has chosen the same amount, but the reason appears different.

Question is, why did President Obama release so much oil after prices already came down? Where was he when prices at the pump were over $4.20 per gallon. Now gasoline prices at the pump are closer to $3.60, at least in the Detroit area. So, it must then be political, say the writers of The Daily Reckoning out of Australia. Hard to argue with their logic.

My friends in Australia believe President Barack Obama is “in full panic mode with the American Presidential election just 17 months away,” and the U.S. economy bogged down in bad debt, high unemployment, still over 9 percent, and high gas prices heading into the summer months. But, again, gasoline prices have come down, not gone up.

The Aussies also point out the SPR, which is located in the U.S. state of Louisiana, holds 727 million barrels of oil. So, less this new 30 bbl million release, the President has 698 million more barrels to play with if he so chooses to release more for his own political benefit. Scary thought, but not improbable in light of TARP and QE2.

To me that means QE3 just may be taking a new form. I guess we’ll have to call it by a new name, QOR1 for quantitative oil releasing.

So, is it just possible the Obama Administration is trying to engineer lower gasoline prices, in essence effectively giving a tax cut to everyone in America who drives? That I guess is supposed to put more discretionary income back into the pockets of consumers.

The next question is, will this lead to an up-tick in U.S. GDP in the second half of 2011 as expected, thus reelecting Obama? Sure, why not, at least in theory. Then again, TARP was theory as was QE2 to reduce unemployment.

Here’s where it gets confusing. On one hand some in government want to raise taxes on energy to get America off of oil, in the form of a national sales tax to reduce the deficit. Then those same government heads provide major incentives for consumers to buy EVs and hybrids like the Chevy Volt, Nissan Leaf and Toyota Prius.

OK, that looks like a plan on the surface, but then the administration changes strategy for political reasons by chopping the legs out from under oil prices, so making the decision to buy an EV at a premium a bad economic decision, at least in the short to near term. Go figure.

No wonder corporate America, especially automakers, can’t plan anything with any accuracy. The targets keep moving.

Bottom line for me as a trader is this: Oil releases affect supply, but only in the short run. Demand has not changed globally. In fact, China demand is about to overtake America.

If Pres. Obama wants to truly reduce American oil consumption and give us a tax break, then initiate an energy policy that immediately takes advantage of our greatest natural resource. In other words, make natural gas our national competing, fossil fuel of choice. Start with trucks, then expand to cars. After all, electrification is still far from affordable for the average driver and will be for many years.

And do not tell me the CIA is unaware that the Saudis are already in league with China to provide natural gas. Heck, even a political science rookie like me knows those LNG tankers are not being built for nothing. After all, Saudi King Abdullah was the first in Saudi history to travel to China in January of 2006. Furthermore, he signed five bi-lateral agreements, including one on oil, natural gas, and mineral cooperation.

Again, in the words of The Daily Reckoning out of Australia, “This is probably the most telling aspect of the new energy alliance between the Saudis and China: it acknowledges that the Age of Oil is giving way to the Age of Gas.”

Problem is, American politicians are hurting American business by choosing to delay, scuttle or just plain thumb their noses at natural gas for automotive, in favor of expensive electrical propulsions energized by hit-or-miss combinations of coal, nat-gas power plants, solar and windmill farms.

That’s what happens when a country as big as America fails to lead by defining and executing a national energy policy; and the administration chooses instead to damn the torpedoes by opening the oil reserve spigot for short-term political expediency. So, aside from the IEA, now who is acting like a speculator?