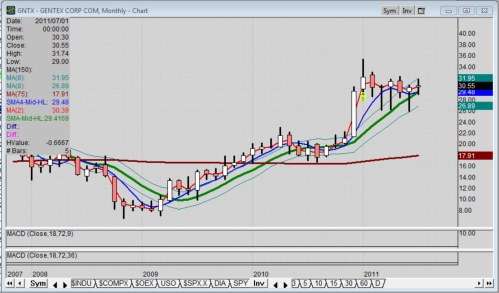 Aside from announcing today that its second-quarter net income increased 13 percent to $38.5 million, Gentex Corp. (Nasdaq: GNTX) which manufactures automatic-dimming rearview mirrors and camera-based safety systems, held a Q & A session with analysts.

The transcript is available at SeekingAlpha.com. And thanks to their copyright allowance, this reporter was able to glean and share key details about their business views regarding the mirrors and camera-based safety systems.

For the record, the context of the comments seemed to indicate the NHTSA decision is a major deal which could affects Gentex’ product planning and manufacturing. Point is, NHTSA is in process of deciding when to make these camera-based safety systems as required by law.

When asked about whether Gentex would be a Tier 1 or Tier 2 supplier, Connie Hamblin, VP of IR and Corporate Communications, said, “No. We would be the Tier I in providing the camera-based systems.”

And when asked about the final decision by NHTSA, Enoch Jen, Senior VP, said, “It’s really going to be affected by several factors that are not within our control. The first is the timing of the final NHTSA ruling. The second is their decision, whether they are going to hold to the September 2014 due date or whether they will allow an extension, and the third will be exactly or whether they make any changes to the response time and brightness requirements, and the fourth is with these, if they don’t change these requirements, will they allow any relaxation on an interim basis. So there is probably three or four factors that really we and you will have to monitor because those will drive the automaker’s decision and the speed in which they make those decision.”

One look at the monthly chart of Gentex stock (Nasdaq: GNTX), the trend has been positive in the bullish direction. In fact, there is strong price support in the $26 area going back to March, 2011.

The high of 35.35 was reached in January, 2011, but has not been seriously tested yet. So, from a technical analysis standpoint, the price dynamics to date have firmly established support and resistance.

Now, whether you want to invest in this stock is totally up to you. Fact is, future revenues will likely be impacted greatly by the NHSTA decision. Thanks to a flood of comments, though, NHTSA delayed final rulemaking for its requirement that all vehicles being sold in the US must have back-up cameras. While 100 percent compliance was supposed to be reached by 2014, that date has not changed. However, NHTSA was asking Congress for additional time to analyze public comments, before it completed the rulemaking process and issued a final rule.

One concern I have is over the old rule of looking over your shoulder when backing up, because a rear view mirror still doesn’t give you a wide angle to see a car or kid running into your way. Drivers backing up would have to do that and look at a screen.

In my opinion, the camera is primarliy for that low standing child and wagon or trike behind the bumper.