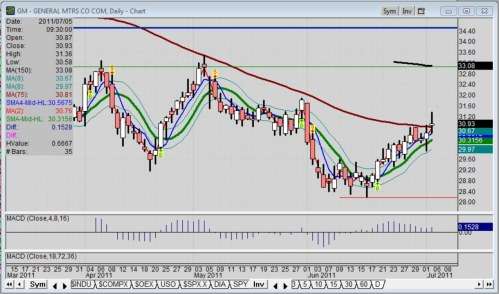 General Motors Company (NYSE: GM) stock, which is nine months into trading since its IPO, has made lower lows and lower highs since its nosedive earlier in the year, including a new IPO low in June. The price chart now indicates the stock is attempting a rebound. Question is, how much?
Advertisement

The IPO offering of 33 and the open at 35 has yet to be reached since the recent sell-off, but the chart pattern for General Motors (NYSE: GM) stock is now looking stronger since its lows in June.

Question: Is there a fundamental reason for the GM stock rebound, like sales? Torque news writer, Patrick Rall, will likely cover the sales in a separate report.

On the other hand, GM is reorganizing once again (no surprise there) but this time within the Global Product Development. See my latest TN article,
GM rearranges deck chairs in global product development

The stock is also pressing against past price support at 33 which is now viewed by market technicians as overhead resistance. This change in status occurs when past price support is broken. For the record, even the legendary trader, W.D. Gann, viewed broken support in this manner.

Recall that GM stock was initially offered at 33, but opened higher in November, 2010 at 35. It later traded as high as 39.48 then trailed downward for months to break all IPO price support. It even broke past 30 and made a new low of 28.165 in June.

Of course, GM stock is driven by the general market as most stocks are, but once in a while a stock will go rogue; some up, some down based on their own fundamentals or the emotions of traders, especially hedge funds who often wield large blocks of shares.

Where does GM stock go from here is anyone’s guess, but the chart pattern seems to indicate the June low is strong support and confirmed as a lower limit, at least for the meantime. If it wasn’t, then the price pattern wouldn’t show strength to the upside at this juncture.

Any market technician will tell you that it is significant note when two separate technical indicators coincide, as do the 150 moving average and the IPO day low of 33.

Masterbuilt ele... wrote on July 5, 2011 - 7:29pm Permalink
GM has been with us for decades. I hope nothing bad will happen to them. I love their cars!
Lilash review wrote on July 11, 2011 - 4:15am Permalink
Congratulations, GM, for a job well done! And we thought that you can't get back on solid ground again! Again, congrats!