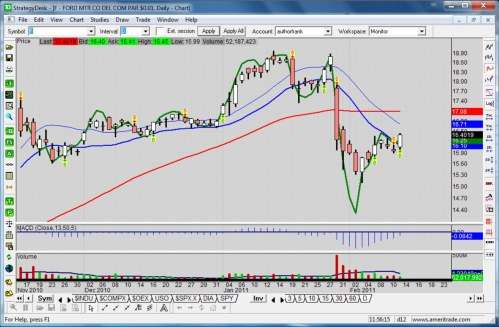 After reporting a buyback of preferred stock to reduce debt, Ford stock (NYSE: F) opened higher at the open and holds its gains.
Advertisement

The chart shows a rise still in play after hours into the open. Short-term price support is in the 15.90 area

Of course, the news of the step down of Hosni Mubarak in Egypt is causing the dollar to strengthen and oil to retreat from its recent rise. Both are good for auto sales.

Although the previous decline of the Ford stock held its mark and was the biggest one-day percentage drop since April 2009 when shares fell 7.7%, it didn’t means Ford was in trouble long term, as its stock had a great performance for 2010.

Recall it was only a few weeks ago that Ford stock was labeled as a growth story per Mad Money’s Jim Cramer at Dearborn Truck Plant. Anyone who watches Cramer on a regular basis knows he likes to back up the truck and take any opportunity in downturns in Ford stock to buy more.

Fact is, most had up to the decline believed that the fundamentals of Ford were strong. Furthermore, Ford Motor Company was slated by Jim Cramer to possibly double.

Again, when asked about the comparison between Ford and GM, Cramer noted that “GM is a hopeful turnaround, but Ford is a growth story.”

For the record, the 2011 North American International Auto Show (NAIAS) in Detroit showed Ford with the largest display ever. Their car designs and technology are viewed as cutting edge; and this venue is continuing in Europe with the 81st Geneva Motor Show.

My own look at a 15 minute chart showed Ford taking off right out of the open gate. And this was before the Mubarak announcement.

For the record, though, the day chart shows Ford stock trading within the 13-day moving average channel (blue). However, the channel and the day bars are trading below the 50-day moving average (red), which, from a trader perspective, is still corective; or, as some say on CNBC, cautiously optimistic.

Ford To Unveil "Groundbreaking" New Vehicle At Geneva Motor Show
EIA projects gasoline retail prices to average 3.15 per gallon in 2011
How to handle your next auto recall
Not so fast with that government apology to Toyota, Mr. Cavuto
Cella Energy achievement may make hydrogen fill-up a reality
Stop-start technology to advance more micro hybrids by 2016

LG's New EV Battery Plant Is a Welcome News for Tesla
Tesla Giga Berlin's New Hurdle: It's Not Only the Gov't, but Now Tesla Itself
END_OF_DOCUMENT_TOKEN_TO_BE_REPLACED