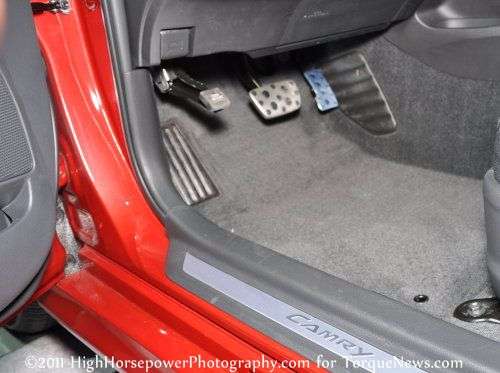 Not so fast with that government apology to Toyota, Mr. Cavuto

While Neil Cavuto of Your World on FOX wants the government to apologize to Toyota, I say sit back and consider the situation in its totality.
Advertisement

The picture taken by Patrick Rall, TorqueNews writer and photographer, shows the By-Wire technology including the accelerator, where the traditional cable has been severed in favor of electrical wires and sensors.

Fact is VW has had immense success since 1995, because their fail-safe includes shutting down the throttle whenever the brake and accelerator are depressed simultaneously.

Frankly, when issues became public, Toyota was in no hurry to bring a self-imposed recall on any of the issues that are now deemed legitimate, despite your insinuation they did. So, let’s use Toyota’s own measure of timeline and patience, ala Weed Hopper.

Here are the key facts, Neil Cavuto: The two product issues that we, the public, do know for sure contributed to crashes were the sticking accelerator pedals and the floor mats. That’s documented.

Now as far as the so-called driver errors, I still am suspicious that so many Toyota drivers seemed to be plagued with this dreaded disease of driver dysfunction than other manufacturers. Then again, shouldn’t the design of the automobile be more robust than that?

As a retired design engineer with 39 years in the auto industry, I dare say that robust design is a mantra. The floor mat was an egregious situtation. Still, anytime a moving part within an automobile can be interfered with by another automotive-related part is a failure in vehicle integration. It wasn't a pop bottle!

Fact is, I worked in vehicle architecture and integration for Saturn and General Motors. We went through great pains creating 3D criteria involving every static and dynamic contingency. Nowhere is that more important than the driver controls, like the brake and accelerator area.

OK, now lets look at the accelerator sticking situation. Again, what we have here is a failure on Toyota’s part (literally) to function within its own design parameters. Any functional part that depends on friction to control the feel has to take into account temperature and the potential for the friction material to degrade over time and possibly harden; which, in turn, can affect the degree of friction.

That added plate the dealers installed merely lessened the degree of friction. It was a good interim design fix, because it seems to be working.

The crucial fact is that the pedal is not mechanically linked to the throttle on the engine. It’s all done via electrical wires; thus, no mechanical link to a spring loaded throttle plate.

Regardless, that friction issue is a failure in maintaining product quality and borders on a lack of robustness in design. Now, it is unfortunate that these problems occurred at the same time. So, let’s not beat up on the government for wanting to protect the American driving public when other reports showed up. You would be the first to say the government was derelict in its duty.

Recall that Toyota did not come to their customers first either with an admittance there may be problem. No, they delayed, then delayed some more; they withheld so as not to degrade their overly protected quality image. By the way, they had too cozy of a relation with government. Perhaps the government felt betrayed. After all, the customers were.

Toyota was dishonest in that respect, which is precisely why they were fined a record 48.8 million dollars. They broke the law, Neil. Should the government apologize for that?

Was it an overreaction? Not when people are dying. If it was your family, you’d be suspicious, too.

That’s why the electronic accelerator system issue was an obvious candidate, whether you are an engineer or not. How do we trust Toyota when they held back and blamed everyone else for the previous two proven issues? Answer is, you can’t.

Trust but verify! Otherwise, why did the government go to NASA? Surely, you could not trust the corporate character of Toyota.

Lest you think electrical miscommunications cannot happen, then why do all cars having a Throttle Positionaing System (TPS) along with what is known as a 'limp-home-mode'? The only reason the car goes into the limp-home-mode is when the accelerator, the ECU (engine control computer) and the throttle are not talking to each other in a way that can be understood. That’s just great; my throttle and my on-board computer can have attitude problems.

In limp-home mode, the ECU (engine control computer) shuts down the signal to the throttle position motor; and a set of springs in the throttle is set to a fast idle, fast enough to get the transmission in gear, but not so fast that driving may be dangerous.

So, your insinuation that all this was done to help “someone else”, implying GM, once again gives Toyota a free pass they do not deserve. Fairness, yes; free pass, no. They are not the righteous ones, while the government is Lucifer incarnate.

Frankly, I’m relieved that there is no electrical problem per se, but I still have an innate suspicion about why only Toyota drivers seem to have this proclivity. For sure, other manufacturers use their pedals or similar designs, but not all of their system software code.

And if all things in Toyota designs were so clean, why do they now insist that all new vehicles will have additional brake overrides? That alone admits to something flawed in its initial design concepts. VW has been using that since 1995.

Neil, with all respect, you do not apologize to a company that is at least two-thirds guilty in how it handled the situation. What do you say? We’re sorry we fined you for practicing the corporate art of CYA. So, give them one-third of the fine back, but that's all.

-----------------------
About the Author: After 39 years in the auto industry as a design engineer, Frank Sherosky now trades stocks and writes articles, books and ebooks via authorfrank.com, but may be contacted here by email: [email protected] He is also author of "Perfecting Corporate Character."

Tesla Contemplates A New Strategy for China Retail even As Sales Boom
Jay Leno on Elon Musk & EVs: “I Think He Should Get ... Credit"
END_OF_DOCUMENT_TOKEN_TO_BE_REPLACED