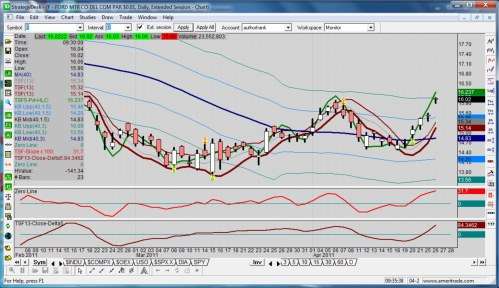 Ford stock (NYSE: F) traded up in pre-market trading after it reported net income above Wall Street’s expectations for the first quarter. The hope for investors is for that trend to continue after the opening bell.
Advertisement

The first hour of open trading is often volatile, though. Question is, will Ford stock continue its rise by extending its price into the trading day?

Fact is, some news end up as surprises to the general market, while others are expected. That is why some pop to the upside, while others fall like a rock. In the case of good news, the market may sell off simply because the news is already known, and the market is focusing on forward statements.

According to the Ford news release, net income for the auto manufacturer rose to $2.56 billion (61 cents/share) vs. $2.08 billion (50 cents/share) as compared to the same quarter a year earlier. This is a rise of 22.6% from the year earlier quarter.

Revenue, on the other hand, rose 0.1% to $31.6 billion, year over year. A year-over-year revenue increase last quarter literally snaps a streak of two consecutive quarters of revenue declines. That is positive for the stock, as revenue fell 8.5% in the fourth quarter of the last fiscal year and fell 3.2% in the third quarter of the last fiscal year.

Then there are Actual vs. Wall St. expectations. In this case, Ford beat the mean analyst estimate of 50 cents/share. Estimates ranged from 36 cents per share to 60 cents per share.

According to Ford president and CEO, Alan Mulally, “Our team delivered a great quarter, with solid growth and improvements in all regions. We continue to accelerate our One Ford plan around the world, delivering on our commitments to serve our global customers with a full family of best-in-class vehicles and deliver profitable growth for all, despite uncertain economic conditions.”

“Our progress toward delivering profitable growth for all will continue as we aggressively manage short term challenges and opportunities,” said Mulally. “We expect our annual volumes to continue to grow substantially, driven primarily by our growing product strength, a gradually strengthening global economy and an unrelenting focus on improving the competitiveness of all of our operations.”

Using a top down approach with the weekly chart, Ford stock is hovering above the 40-week moving average which is still rising. Even the TSF-5 Slope indicator which I use is showing a continuing rising line above the zero line. That would technically be deemed as bullish.

Looking upward, Ford stock has major resistance at 18.97. However, it first has to clear the 15.98 resistance level on a close basis.

If Ford’s open at 16.04 at the opening bell in New York can hold, and the other general market fundamentals can hold as well, then Ford stock may be on its way. Just be apprised that news out of Washington, though, will likely weigh heavy.